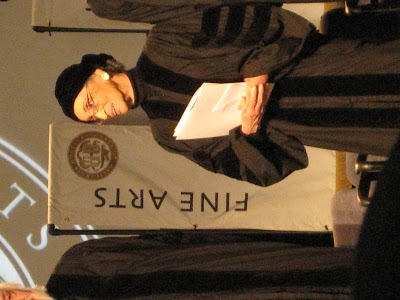 About my commencement speech ... .

Words actually do fail.  In this case I was so overwhelmed by the size of that audience that I instantly froze!  The plan was to thank a list of people starting with President Beal, Sanjit Sethi, the Board of Trustees, faculty, my family and friends, the students and Class of Spring 2011, and by that time the nervousness was (theoretically) to have subsided.  Instead, I remember mentioning President Beal and then everything became a jumble! 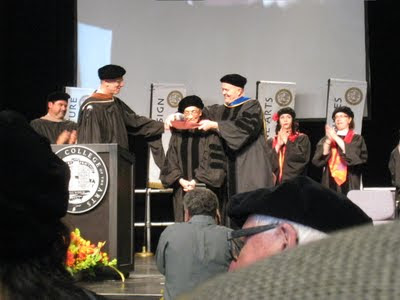 I managed to give a speech -- and from the silence in that huge hall -- it must have reached the audience, but for the life of me, I couldn't remember a word of it!  I must have uttered a reasonable series of words of some sort in a logical sequence, but everything seemed scrambled. After a reasonable length of time (maybe 10 minutes that seemed an eternity) I heard myself ending with best wishes to the Class of 2011 before returning to my seat (forgetting my folder on the lectern).  At that point I found myself distracted by a parade of interesting, outrageous, wildly inventive, highly-varied, shoes on the feet of the graduates as over 400 of them paraded within 8 feet of my chair in the ceremony of acceptance of diplomas and stoles not unlike my own.  (I'd leave the self-criticism until later.)

It felt as if I'd failed, totally, but as the grand recessional ended, I could see that the audience was not sharing my sense of failure.  They were smiling and reaching out to me as I marched by.  Somehow the words must have all come out in some coherent form - or surely it would have been evident in those smiling faces.

The later blow-up with Dorrie meant that there was no time to re-live those moments, or, to sort out those negative impressions, and I'm sure that the residual feelings of that failure to live up to my own expectations became confused with her accusations and added to my sense of being profoundly undeserving of this great honor; obviously bestowed in error!  Yet, my family and friends had been glowing in their pride when we met after the program; I could feel it.  Those balancing good feelings were lost in the melt-down -- but have since returned, and for that, I'm grateful. 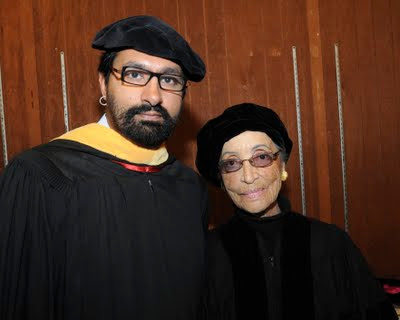 It may interest you to learn that I've since "edited" that speech (having had it return in bits and pieces just before dropping off to sleep each night since), and it's now nearly perfect.  Wish that had happened before the last time to have my say before the world had passed by; but maybe there were enough fragments in whatever came forth in those moments, and they'll have to suffice.

None of it makes any sense, but at the feeling level, there is fulfillment of a kind that few of us mortals ever experience; I'm certain of that.  Maybe it's at this exalted level that life makes about as much sense as is possible to achieve -- but only if we stay on a spiritual emotional plane.  It's fragile, and tends to fall apart until we go beyond the rational.  But once there, the epiphany generates its own light and the brightness is blinding -- so much so that one can only hold on with a steadying and stunning parade of shoes ... .


On Friday I gathered up six original songs (written over 40 years ago) and burned them onto a CD ; enclosed them in cards of thanks -- and mailed one each to President Beal and to my friend, Sanjit.  I'm hoping that these bits of myself which contain words of meaning carried by a really lovely young voice I barely identify with now, will communicate the gratitude that will follow me for the rest of this remarkable life.

Photos by Liz Fisher except for
Bottom left;  Professor of Community Arts, and my friend, Sanjit Sethi, who introduced me to the audience and held my hand in the days leading up to the big event (the first of those taken by the assigned photographer).
Posted by Betty Reid Soskin at 5:01 PM