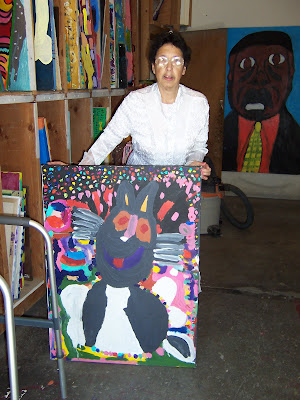 "The Rapture!"-- succeeded by the descent into Hell!

It simply didn't occur to me to not include Dorian in last week's events, though doing so was sure to produce some challenges.  I long ago developed the ability to factor those in and make do with whatever results.

At some point in an earlier blog (maybe last year just after 4th of July?) I tried to describe the schizophrenic state I have to place myself in when she's included in my social activities -- the choice  is between staying with my "normalcy" in relation to others,  or, leaving her all alone in the chaotic world of intellectual deficits that she inhabits.  The choice to stay in her world I've learned to make willingly, and to trust that others (who may read my behavior as socially withdrawn or deliberately isolating myself) to understand.

Without too much thought or planning -- and being preoccupied with my own over-the-top acclaim of the past months -- I took advantage of the fact that she was nursing a sore throat and running a low-grade temperature and excluded her from the Commencement dinner on Thursday evening.  I admit that I felt relieved at not having to deal with tending to her at my time of celebration.  I used the excuse that I had to attend a meeting in San Francisco (not so unusual) so would not be at home when she called to say good night, her usual nightly practice.

But she was with me all that evening in that I chose to wear one of her delightful creations (a black beaded,  sequined, and appliqued blouse with her signature cats and flowers over black crepe trousers), and used them as a conversation piece in those (often difficult for me) small talk encounters that are typical of receptions.  The choice served well since, in chatting about NIAD (National Institute for Artists and Disabilities), I learned that there was a significant number among the celebrants who were parents or siblings of the mentally-retarded or physically disabled, including at least one member of the Board of Trustees, and President Beal, himself.

When I returned to CCA for the Friday evening fashion show, I choose to wear my incredible Dorian-hand-painted "happy pants," which seemed appropriate since this was the California College of the Arts, after all, a school which supplied the interns who served as instructors at NIAD.  Though her fever had subsided, there was no thought of taking her along since she knew that she needed to heal in order to attend Saturday's commencement ceremony.

Dorrie's throat and slight fever subsided over the next 24 hours, and (of course) there was no question that she would be included in the great event of the day.  I picked her up early on Saturday from her apartment and prepared her as far as I could with a description of what the day might hold.  I'm not sure that I gave her anywhere near a full understanding of just how "honored at" her mother was to be, however.  There was no clear way to do that, or at least I couldn't find one.  An important omission, as it turned out.

The limo (sleek black Lincoln Continental) arrived at 12:15 as scheduled, and we were off.  I'd tried to prepare her for this, and was amused with her remark as we rode in the back seat behind our uniformed driver that she'd been in a limo before, "... this is like Grandpa's funeral, isn't it?

She'd not been prepared for arriving at the Concourse and 4000 jubilant people gathered there -- with flashing cameras, strange people in black robes, unfamiliar cousins, friends, fellow park rangers, people who obviously knew me but who were completely unknown to her, nieces and nephews seldom seen, and her two brothers all in the mix.  She must have been totally overwhelmed!  Unfortunately, her mother, who is usually running interference, interpreting, and keeping close at hand, was too personally involved to notice the pressure building.

She managed to get through the celebratory dinner at a lovely East Bay restaurant  following the ceremony, but just barely.  There was her mother seated at the head of the table surrounded by proud family and friends, draped in "honorary doctorate stole" with bouquets being placed in water by the waitress -- wearing two leis draped 'round her shoulders, and being hailed like a rock star!  My preoccupation with self in those moments made me insensitive to the storm building in the background.

We arrived at home in the early evening to a nightmare of reactions to the day.

"It's always about you, you, you!!!!!  Justified or not, that has been disturbingly true over the recent past.  It must have been just awful for her.  She was now totally out of control and into a screaming rage!  I'd completely forgotten that it was she who is the artist, and not her mother.  Hadn't I always celebrated her for that? Had I invaded her world unwittingly? Was the wearing of her designs a mere exploitation of her artistry?  Why on earth was all of the attention being centered on me?  What on earth had I ever done (to her understanding) to deserve this amount of public attention?

Dorian's limited brain-power has provided her with no filters.  She could not possibly hide deep feelings of hurt, envy, and unmitigated rage! Was I truly as undeserving as I've always suspected, and could it be that my children and grandchildren share her negative feelings but were unable to express them as honestly as she?

Over the entire weekend she ranted and raved about her own accomplishments -- bragged loudly and outrageously in an irrational but understandable display of what-ever-it-was until -- by nightfall on Sunday -- the fever had returned and her throat was now inflamed from screaming her pain.

Eventually, I felt terribly bruised from the onslaught of her charges, but there was just enough truth in them to overturn the elation of my extraordinary moment in time.  My long-restrained response to the unfairness that I've been feeling invited doubt to re-enter the ring for a return match.  I felt angry at her for her inability to understand and appreciate all that had happened for me -- and I felt helpless to combat those deficiencies that her retardation has caused to so relentlessly dominate my existence over a lifetime. And, I simply didn't like her at this point, for raining on my parade.  That said, we need to get on with life and continue the love that sustains us both through these extremely difficult places.  Maybe what saves us, eventually, is the ability to face up to circumstances that are beyond our control honestly, and ride them out with as little carryover as possible.

On Monday morning, I made an appointment with the Urgent Care department at the hospital and took her in for an examination.  The fact that -- added to a flare-up of allergies -- this was purely an emotional response to all that had happened.  My guess was that it would soon pass.  Predictably, she was seen by her primary physician and my diagnosis confirmed.  I then gathered up all of the lovely bouquets and the beautiful leis and brought them to my office cubby.  All signs of the celebratory weekend had to be removed from my home in order for peace to return to our lives.

A week has now passed.  She returned to her apartment on Monday as I got back into my work and -- except for an occasional reminder -- Commencement has been put on a back burner, except for my writings.   She holds nothing back nor does she carry such episodes into the future.  For her, it's over.  From her attitude since she came home for the weekend yesterday, one would hardly guess what a traumatic period we've just come through.  At this moment she's sitting in the big chair in my living room busily working on an art piece (making a crocheted pillow cover) and bragging to no one in particular about her hand-painted toy box at NIAD that sold for $140 during the week -- and that she has a new piece in an exhibit in San Francisco this week ... .

Dorian, the Artist, whose feelings of the unfairness of it all, has come through despite resentment at being skipped over -- of the absence of public appreciation (and isn't that a fairly universal hunger?).

... I guess I wanted to feel the confetti drifting down just a little while longer ... .
Posted by Betty Reid Soskin at 11:49 AM