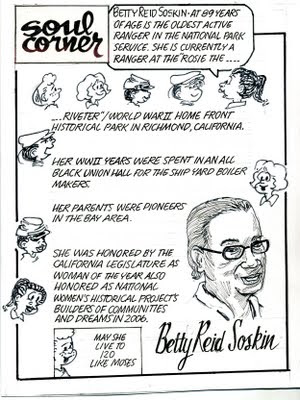 If I ever wondered how it would feel to be 'cartooned,' the answer is in ... .

As I understand it, in the Sunday edition as published this will appear in full color and that day the little child characters will be talking about the figure featured in the Soul Corner.

Received a call today from the office of the city manager announcing that the mayor of Richmond's sister city, Shimada, Japan, is arriving soon with his entourage of about 16 visitors, and that they would like to schedule a bus tour for July 5th.  That means working through an interpreter, of course, but that is far less daunting than you might assume.

I'm looking forward to another adventure in international relations -- and by that time I will surely have had some word about whether my contract is being renewed or if I should get out the kazoo and start humming!


In a few short weeks we'll be observing another Day of Remembrance at the Port Chicago site of the July 17, 1944 tragic explosion during WWII.  That night 320 young American lives were lost.   Everyone is deep into the planning of this second such event since the site became the 392nd unit of the National Park Service in March of 2010.  It now has assigned staff and is developing programming that is bringing to light the little-known history of the mutiny trials that eventually resulted in the desegregation of our armed forces.  (Enter "Port Chicago" into the search bar at the top left side of the screen - above the banner - for the full story.)  The process took 5 years to complete, but it was a watershed in our history of social change that forever changed the nation.

But, for now, I'm needing to reacquaint myself with the stories of Japanese internment (120,000 taken from their homes and sent to relocation camps -- 70,000 of whom were American citizens), so that I feel competent to handle any questions that may arise on the July 5th tour.  But, if I recall, last year when I conducted a tour at the Rosie Memorial for visiting students from Japan -- their professor told me that the internment is not taught in their schools -- so maybe I'm being overly sensitive.  We'll see.  But I'd want to be sensitive to the possibility that someone will remember ... .

I still do.
Posted by Betty Reid Soskin at 7:49 PM