Recently found myself observing that -- as I listened to my favorite jazz station on the car radio ... .

that I hadn't heard an African American jazz singer for a very long time.  Also, that black jazz musicians have virtually disappeared from the airways, or is it simply that I can no longer distinguish them from their emulators?  I don't think so.   Josh Redman still stands out as having an identifiable black sound.  And, it doesn't take many notes into a song to be able to tell a black from a white voice -- no matter how hip or laid back the performer.  There's a kind of quiet pride when -- alone in car --  Aha! I pounce on the imitators.  And, yes, even Diana Krall and the inimitable Mark Murphy fail my test of the melaninian sound (and I know that's not an actual word - but it'll do for the purpose of discussion).

Somehow great American popular music gave way to overwhelming decibel levels, elaborate costuming, general messiness masquerading as costume, mosh pits, dramatic clown-like theatrical makeup and fright wigs; partial and whole nudity on stage, the smashing of guitars, etc., and over time, both the music and my finely-tuned ear got lost in the carnage of Rock and Roll!

While watching Lee Williams, traditional gospel singer from Mississippi in a gospel concert -- almost motionless and dignified -- dressed in a fine dark brown suit, white shirt, and handsome silk tie standing at the mike before a fervent black evangelical congregation, I was reminded of how far the general music world has moved from complex sound to appearance and marketing ploys to attract sales and new audiences.  And today's white derivative musicians are working frantically to produce that wildly passionate 'call and response' still so natural and alive in the black church.  It was exploding all around us as we swayed to the insistent rhythms at Parks Chapel that day.  What I was hearing (and fighting the urge to dance in the aisle) was the age-old fundamentalist roots of jazz,  the legacy that I've almost lost in the course of becoming acculturated into the American whole. 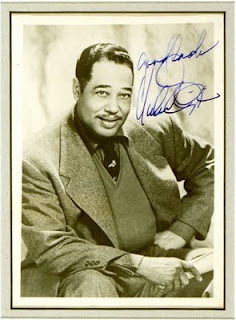 With Lester Young it was a simple pork pie hat; with Duke it was either a continental casual look or those formal tails swinging from the back of that piano bench, and Nat "King" Cole was the very essence of good taste -- right up to his time- and date-stamped patent-leather "processed" hairdo.  Physical appearance didn't compete with the music, even for the women of jazz, the signature was buried deep in the individual sound of their music.  I like to think that their style of dress was in keeping with respect for their audiences and their art.  I also believe that a cultural marker was set by the style created in the jazz world that is still visible in today's black church where one would never be seen in torn Levi's and  T-shirts in the House of the Lord, and where hats are elevated to "crowns" by the "saints" of the congregation.  Traces of the jazz world are still reflected in both the sound from the choir loft and in the pews through the "call and response" and "the beat" of sung gospel.  Black music has been powerful enough to stand alone with little need of enhancement beyond the artist's ability to deliver its message. Think the always well-tailored Wynton Marsalis for a contemporary example, and you'll gain some sense of the sacredness of jazz, and that this is, indeed, the black world's classical music.

The distortions emanated not only from the Rolling Stones and Kiss, but Cindy Lauper and now Lady Gaga in her infamous meat dress.  It seems foolish to hear both Lauper in her day and Lady Gaga, currently, complain that their outrageous look is merely attention-seeking, and that when they're performing -- we should only pay attention to their art.

They've all been "commodified"  (okay, so according to the spellchecker, I'm making up words again) to the extent that artists have for the past few decades been sold as packages, a package that must include a "look," so that the quality of the music has disintegrated almost beyond recognition.  It's now almost impossible to comprehend either lyrics, or the intent of whatever they're offering to audiences beyond the sensational.  At best, most groups are playing mediocre music -- all different in an identical way, except for those still writing and performing simple original music on acoustic instruments in a genre other than jazz or blues -- but those more clearly associated with the individual artist's life, and within the context of their own experience.  I continue to find indescribable beauty in authenticity wherever it might be found.


But today Sonny Buxton has reminded me that all that good stuff is still available if I just tune in to a time when Jazz at the Philharmonic sessions were recorded for posterity.  I've now lived into that posterity -- and can draw on all those musical treasures for the good of my soul.  I've spent the past several hours just listening and remembering, and oh so many years have been tossed off in the process!


I find myself wondering when we're going to discover that those young black kids who might have become the Nat Coles, Lester Youngs, Mile Davises, the Charles Minguses, the Ella Fitzgeralds and Sarah Vaughns, are probably languishing in the prisons of the nation, completely unaware of the loss of the legacy that was theirs; while their imitators, the well-intentioned "derivatives," have filled in the vacuum left by their absence from the schools, the studios, and the sound stages of the country and the world?  And there's an innocence about it all since I have the feeling that fine white musicians have expropriated black music to the point where it is now they who are defining the genre, and all without any awareness of what role they've unwittingly played in the process.  Don't blame them, they were just "integratin'," and God knows that was the name of the game, was it not?

... and are we all not the poorer for the loss?