Thinking about jazz today as it plays in the background.  It's Sonny Buxton's Mid-day Jazz ... .

Sat down at the computer this morning wondering just how I could possibly write about yesterday's bus tour and do it justice?  It had been on my schedule for weeks though I'd paid as little attention to its approaching as possible without admitting to myself that there was some concern lurking in a corner of my consciousness that I might not be adequate to the telling of this history?  Would they guess that I might be insecure in this time of such high public acclaim ... acclaim that I still question ... in those minutes just before sleep each night?

The teachers from Placer County school district under the leadership of the Department of Education (history?) at Sacramento State had arranged as a part of their week-long Bay Area experience, a day at Rosie the Riveter WWII/Home Front National Historical Park; a trip to Angel Island; one to Golden Gate National Regional Park at Fort Mason; and among them would be Professor Shirley Ann Moore of the black history department of Sacramento State.  Dr. Moore was to give a talk following lunch that would prove to be an extension of my own presentation earlier in the day.  Our work dove-tailed as if it were planned. We'd met once before as participants in a seminar sponsored by the University of California, but not where I had any kind of primary role to fulfill, so we were virtually strangers.

Also in yesterday's group would be recently-retired former journalist Tom Debley, historian from the Heritage Department at Kaiser Permanente corporate headquarters in Oakland.  We will be working together on a project involving the Pullman story involving Ethel Dotson's little International Hotel over on South Street in Richmond.  This would be the first time he would experience Betty the Tour Guide and self-proclaimed "historian."  Wow!  Two professional historians before whom I would be conducting 3-hour bus tour based on WWII history -- an era I'd surely lived through as a naive 20 year-old, but certainly not studied.  As I've said, I'm not working from an acquired store of knowledge, only personal remembrances of the era of WWII; my personal oral history. 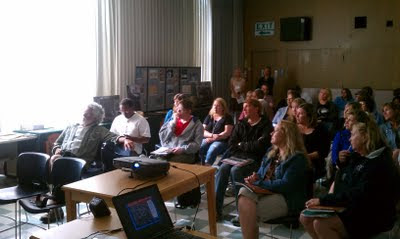 Early in our 30-minute orientation before boarding the bus I opened with, "you will be experiencing through me, a very subjective presentation of one who lived the experience, but in no way do I claim to be an historian."  That being said, I almost immediately lost all self-consciousness or feeling of being inadequate to the task before me -- which meant almost 3 hours of being "on" with microphone before 50 passengers on a huge bus -- who magically were transformed into 50 pairs of eyes set in faces that expressed an avid interest and mirrored back to me expressions that assured me that it mattered not what labels were used, these were eager listeners to the stories -- and as such gave me more than polite attention.  They were involved.  As always, I felt the excitement of sharing those stories and, as always, they came alive for me as well.


But these thoughts are competing with the music of the jazz station, KCSM out of San Mateo, playing in the background.  Maybe I need to stop and write them out of mind while they're fresh and clear ... .

The music also brings to mind, Dmitri and the fact that I've not yet had a chance to hear him again; maybe this summer he'll be coming to one of the jazz festivals; there's one at Stanford university tomorrow at 2:30 featuring a Tribute to Nat Cole, just maybe ... .Skipping over to the website I learned that the great Brazilian composer/musician Milton Nasciamento will appear some time during the festival ... .The only time I wish to be young again -- the music I'd love to live over again.

Maybe there is comfort in being reminded that there are at least two tracks to my mind, and that I can still entertain more than one interest at a time even at this age without losing it!

(Now I'm listening to a Slam Stewart solo with Slam humming along with his acoustic bass in a fantastic improvisation on Hoagy Carmichael's Stardust -- with solos by trumpeter Willie Smith, Lester Young on alto sax, and Lionel Hampton on vibes from a concert produced by Gene Norman in Los Angeles in 1947.)

I need to give this full attention, guys, sorry!
Posted by Betty Reid Soskin at 11:23 AM