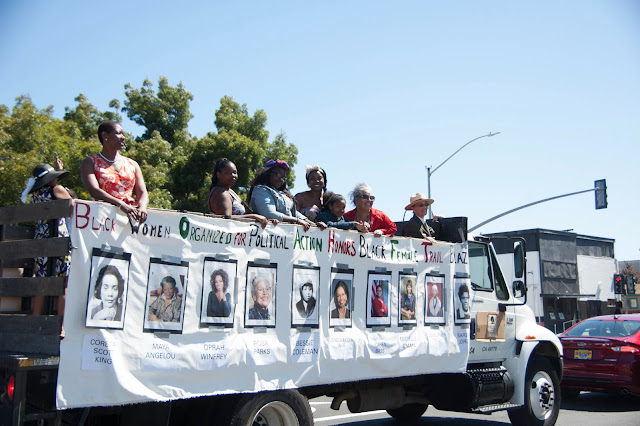 Saturday's Juneteenth Parade ... a celebration that came late into my life  ... .

This is an African American holiday that hasn't held much meaning until recent times.  It is really a Texas event -- marking the time when black folks in that part of the country learned of the Emancipation Proclamation and that -- nearly 300 years of enslavement -- freedom had come at last.

Having grown up in California since the age of six, there was much black history that escaped notice until young adulthood.

Our unit was sponsored by BWOPA (Black Women Organized for Political Action) and I was among those honored to "bop" to the music over a blasting sound system playing Aretha's "Respect" and waving rhythmically to the crowd as we passed -- following the unit of colorful Black Cowboys on horses and just ahead of the city's public safety vehicles.


I've pretty much recovered from the paranoia of the last post, just in time for another attack brought on by opening my inbox today and discovering -- not in my spamcatcher -- but among those messages from (presumably) my regular correspondents with whom I've had prior contact.  Except that today's messages had one having to do with the current flap over Edward Snowden of the National Security Agency leak and the disappearance from the airport in Moscow -- with a long message from former CIA agent, Valerie Plame Wilson, and her husband, Joe Wilson -- a no-reply message by way of the Guardian; United Kingdom to which I've never subscribed.

Since they are surely not of my world,  so there would have been no way for their names to be in my address book (so why are they in my inbox (???).

I suppose it's a case of these  noted figures from far beyond the borders of my modest life and times sending their message out to millions of people in all corners of the world -- and that it's all purely an instance of the power of the medium to spread its message ... and not personal at all ..

Times have surely changed since that Emancipation Proclamation got waylaid for those 3 years when Texas's black folks were cheated out of 3 years of freedom while the rest of the South got on with their lives - finally out of bondage.