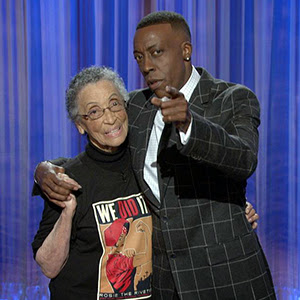 Dancin' down the Rabbit Hole with Arsenio!

... and Associated Press, CBS Local, CBS National, NBC Local, NBC National, CNN's Anderson Cooper, and along the way I was too swamped to field calls from Diane Sawyer's Good Morning Show and Al Jazeera America's producer and lost them.

I know.  It's crazy.  Weird, but as my grandchildren would say "waaaaay cool"!

I hardly know where to begin.

I suppose it began with the shutdown of the National Park Service along with other federal agencies, and -- along with 800,000 other federal employees, I was furloughed.  On October 1st we arrived at work, worked at our desks for about 4 hours putting our phones on vacation status, our email boxes with "sorry to miss your call, but I will not be available until we return to work at some indefinite time at which I will return your call."  We watered our plants, closed our files, and headed for home until further notice.

For several days I sat around matching socks, tossing accumulated junk mail, made an attempt to organize "the Cave," which is the "everything room" where those things that have no home elsewhere in my apartment find a place to rest.  It's where I'm sitting now at my MAC and where the walls are lined with photos of my life's events that are too numerous and too laudatory to be allowed in the living room lest visitors think me too self-promoting.  But here in the Cave, they serve to provide energy and confidence when those things are lacking -- we all have those days, I'm sure.

Our superintendent called to ask permission to give my phone number to an AP reporter seeking a story.  Being happy to have an assignment, I, of course said "Yes!"

It was obvious that the media was seeking angles to tell the Shutdown story that might be unique, and "the Oldest Ranger in the National Park System" might be just the ticket.

That opened wide the doors and within 24 hours it seemed that every part of the news media was calling for an interview.

I'll continue this when there's time.  Gotta do some call backs now.