Then there was this -- working away in the background  ...

While en route to the Oakland airport cell phone rings and CNN is on the line from New York wanting to arrange for an interview with Anderson Cooper.  By now nothing seems impossible.  Why not? I explained that I was boarding a plane within minutes and that the immediate future was unknown!   I've walked through the looking glass and was now firmly on the other side.

Having no idea what we're heading into, I could only think to give the caller the name of Producer Bryan Banly with the suggestion that they make contact with the studio staff to see if this was within the realm of possibility.  I'd not yet seen an itinerary for my day in LaLaLand, and had no idea of what to expect beyond the fact that I would be picked up by a limosine at LAX for delivery to the Studio.

Upon landing without a hitch, we found our driver waiting below holding up a REID sign.  Should have guessed that this was the way it was handled.

Shortly after our arrival at the Hollywood studio where we would spend this incredible day, we were greeted by our producer with his clipboard and anxious look (explained earlier) and news that they'd received the call from Anderson Cooper's people and that -- at sometime between makeup, rehearsal, and the actual show, the truck from the Los Angeles Bureau of CNN would arrive to set up the interview. 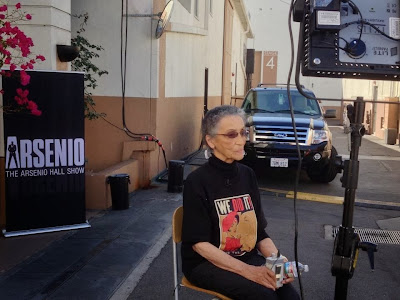 It was while I was in Make-up that Al Jazzera America called, a call I was never able to return, unfortunately.

After deciding that the studio space they'd been assigned was just too noisy, CNN decided to set up outside where I sat in a tall chair waiting (and waiting, and waiting) to go on -- all wired up with the little receiver tightly set in my left ear -- listening to the end of the interview that preceded mine.  For this they'd sent over a huge satellite truck from the Los Angeles CNN bureau for but a few minutes of the exchange between the coasts via Anderson Cooper and moi.  What on earth could one say in five minutes that would be worth all of this?  The weight, the responsibility of being cogent and significant and not wasting these expensive resources was a thought that rose to the surface but was quickly discarded.  To go there would be to deliver myself into the madness.

Then the real waiting began.  I learned later from David that there were negotiations going on concerning that Arsenio sign that is clearly visible here.  CNN wanted it removed.  Arsenio's people were adamant.  After all they'd bourne the expense to bring me to Los Angeles, and -- at least until my plane lifted off tonight -- I was their property.  They argued while I sat waiting for some resolution.  (Not unlike the insanity going on in Washington, right?)

Suddenly things got resolved, and in the negotiations it was determined that they would remove the sign only if Anderson would give them a mention during the interview.  That happened, if you'll notice.  It had taken about 20 minutes to get through to what ended up a five minute segment on camera.  I will never understand the logic of such things ... .

Only difficulty I found was that I've learned that I'm clearly not a "radio" person.  I need to see to whom I'm speaking.  I hate spotlights since they blind me to an audience.  In this instance I was actually speaking to a little box raised on a tall pole and Anderson was in New York -- out of sight.

When I've watched the interview since returning home, I see my face go blank at the start, and can remember clearly how that felt.  It was uncomfortable.  It was disorienting.  I also realize that I was lucid and after a few wasted simple "yes" answers -- I did share the message that I needed to, and that I didn't look scared -- only not animated.  Not really as interested in the process as I would be once the rehearsal began.

Then it all came alive!