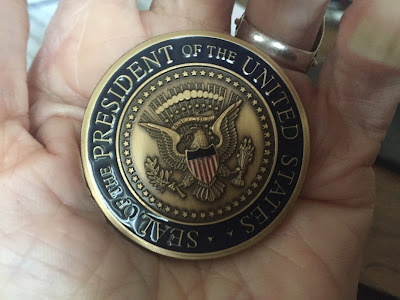 Arrived home yesterday from the greatest adventure of my amazingly adventurous life ... .

... and I'm so far up the Yellow Brick Road that it may take considerable time before I'm back in touch with reality!

I've been to see the Wizard, and he's all-powerful, brilliant, and worthy of our patriotism and dedication.

But I cannot get to this remarkable historic story without starting at the end.  Right now this small object is dominating every thought and consuming all of the intellectual powers at my command.  I can think of little else.  I'm still savoring the moment:

We'd been marking time in the Talent Tent, a large canvas structure that was well-heated and where those gathered prior to performing in the National Park Service holiday special; the National  Christmas tree-lighting ceremony in President's Park in the Ellipse -- with the President and First Family.

First of all, the Obamas are physically and unbelievably beautiful!  Though I've seen countless photographs of Michelle -- nothing prepared me for how stunningly beautiful she is!  He, of course, exudes a boyish charm, but power emanates from every pore and sinew.  I had a visceral response the moment they walked into the room preceded by a bank of Secret Service agents.

I suddenly felt that I might understand something that had escaped me until that moment.  I suspect that this beautiful and powerful couple is unreasonably frightening to the unenlightened.  For those born to white privilege -- a bedrock component throughout our nation's past and present, and threatening to our future in a fast-changing world -- this has to be demoralizing at the cellular level.  How on earth does one maintain superiority to this remarkable pair who simply refuse to be inferior?  There are inexplicable reasons why these two are threatening in irrational ways; as irrational as the insistence that this president not be allowed a second term by forces in the Congress at the time of his first inauguration.  For reasons beyond comprehension, and even at the risk of the ruin of the nation, this man must be contained.  None of it made sense until that moment.  Might it really be as simplistic as this?  Surely not; but then ... .

As I approached the two, who were standing between the flags of our country and the United Nations, my president offered his hand in greeting.  In that magical moment he took mine and slipped from his palm into mine -- the Presidential Seal!  It was done in secret; subtly.  No fanfare.  Nothing but pure undiluted pride and honor between two people.  This is the way I would have wished it to be, were I asked for guidance.  Obviously, somewhere in their research, someone on staff had discerned this truth, and had shaped my moment in this most memorable way... .


It was then that we were photographed with the President and First Lady -- as a group that included my two granddaughters, Tamaya and Alyana, -- then with me, alone, with the Obamas.  The photos will be sent to us after being signed by the President of these United States of America.