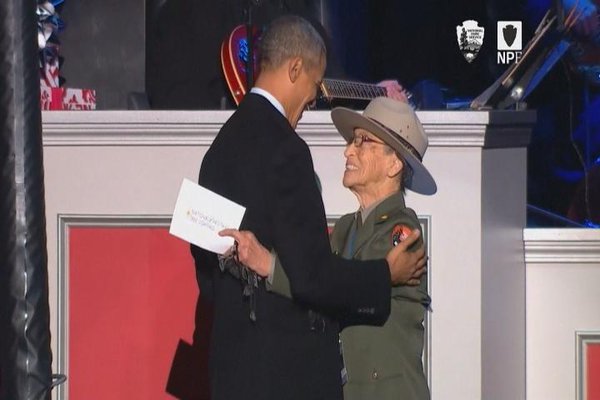 Should Fate follow the pace now set by forces seen and unseen, Life should be anything but bland over the next few years!  I'm way overdrawn at the Wonder Bank.  Can't imagine how the beautiful people manage to live through it all ....


The only item left on my bucket list is Lyn Manuel Miranda's Hamilton!

On Saturday when we landed at SFO I'd not yet seen the televised event that I'd participated in just 24 hours before.  In fact, it was hard to realize that it had all happened within 3 days. 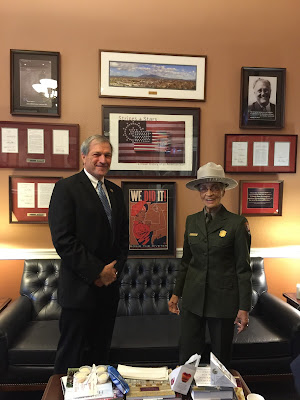 I'd walked through the Frederick Douglass house in Anacostia with Martha and my granddaughter, Tamaya; re-visited the Lincoln, the Vietnam, and Korean Memorials -- all in a drizzling rain that dampened everything but our spirits.  We'd met Ranger Jerry Hawn who generally holds forth at the WWII Memorial, but who had been assigned to serve as our guide and interpreter for the first day.  He was gracious and well-informed and served us well throughout the day.

Wednesday's schedule included an invitation to spend considerable time with my congressman, Rep. Mark DeSaulnier, who hosted our group (Martha, Tamaya, our filmmakers - Doug McConnell and Stefan), for lunch in his stately offices.

His current work includes the gaining of exoneration, posthumously, for those convicted of mutiny, for refusal to return to reloading of ammunition after the tragic explosion at Port Chicago on July 17, 1944, in which 320 American lives were lost.  It is our hope that President Obama will sign that bill before leaving office, and Rep. DeSaulnier's goal is to see that this happens.  Since the president signed the legislation that made Port Chicago a unit of the National Park System, chances are good that we'll be able to close the books on this project soon.  We got to talk about the bill's progress through channels.

He then led us out into the long hallway of impressive offices marked with plaques announcing legislators of note -- through Statuary Hall where Rosa Park's statue has now been installed, as only one of two women present among the iconic men of history.  There was a moment of conflict for the Unitarian-Universalist in me since it was the statue of Rev. Thomas Starr King whom she replaced; a Californian whose work prevented California from entering the Civil War on the side of the South.  I'm told that his statue is now back home on State grounds in Sacramento.

Then on to a trip down to the level where our leaders transport themselves to the Senate and the House where bills are debated (at least theoretically).   As our group made its way down that long lower pathway, a surprise!  Suddenly walking towards us is the East Bay's longtime activist and my friend, Representative Barbara Lee,  and we were both rushing forward to embrace as if we were at the corner of 14th and Broadway just leaving Geoffrey's Place back in Oakland!

Led by our host, our group was able to sit for awhile in the Members Gallery in the House where we listened to young Rep. Joe Kennedy, grandson of Robert Kennedy, passionately urging the renewal of the Education Bill on the floor of the House.  It was a moment to remember for my granddaughter, Tamaya, who was wide-eyed through her special moment in time.