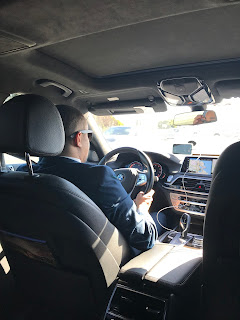 It was a Fox News experience ...

Found myself in an alternate universe today, and I'm not sure how I feel about it.

Picked up at  at my condo at 12:30 by a uniformed chauffeur in a limo and driven to a studio in San Francisco for an interview segment on the Fox News channel hosted by Arthel Neville.  Strange.  Down the rabbit hole it was, and a few hours later  I'm home again (it's now four o'clock).  It all feels like a dream; as if it didn't happen at all.   A pure fantasy ... .

Driver stopped, went around the car to open the door for me (I'd forgotten about that ritual) and escorted me to the entrance to a studio on Battery Street near the tourist-crowded SF waterfront.  The building appeared to be closed, though a woman could be seen sitting in the small lobby.  She rose to tell me that the technician "working the show" was on his way, that he had the key to the elevator, and that we had to simply await his arrival before we could get to the third floor studio.  She turned out to be the make-up artist, and I was her client.

We waited for about ten minutes before he arrived with the key, and the 3 of us proceeded to where whatever this was would occur.

I'd not been prepared in any way for what was to happen, and had no idea what to expect. 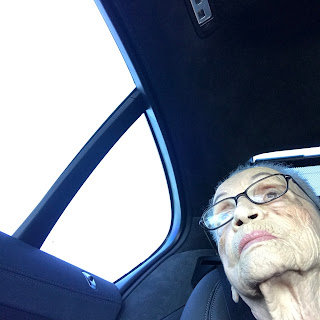 I sat in a tall chair as the make-up person prepared her materials from a large bag she'd brought with her; she arranged an array of various-sized brushes, tubes, lipsticks, little containers of cosmetics of one kind or another, and she quietly went to work rising bravely to the challenge of  trying to renew a 96 year-old face in the day of the Millenials.  No conversation.  No instructions.  No nothing.  She completed her work and then ushered me into the Green Room where I would wait for instructions that I'd learned by now were arriving via radio/cellphone directly into the ear of the techie, apparently, and all emanating from the studio in New York.

This was a mere satellite, nothing more.  The real Fox world was on the other Coast.

After a short period Techie came for me, seated me on a chair under bright lights, clipped a microphone to my collar, told me to look at the red light on the equipment in front of me -- then placed a receiver in my right ear through which the New York news team was telecasting Fox news!

I'd entered an alternate Universe.  Truly.  The panel was discussing the recently-released House Intelligence Committee's  Devin Nuns memo.  The conversation in no way resembled that of CNN's panels last night, nor the more balanced coverage of C-SPAN that I'd listened to for hours before sleep.  I rarely watch Fox News, so wasn't prepared for the wide variance of opinion, though I'd heard of it for years. 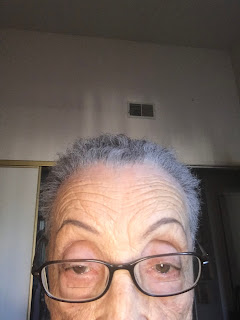 After about 15 minutes the NY producer came into my receiver to say that I would be on right after the next commercial.  I was in no way prepared.  Hadn't learned until moments before that the little red light wouldn't turn into an image of a real person with whom I could chat about whatever she was primed for.  I'd had experience with Skype sessions over great distances, and expected to be able to see the interviewer on the screen as we chatted.  With without the image, there was no relationship established, even virtual.  No one to speak with directly.  I was totally lost!  No eyes to look into, a prerequisite for any presentation I ever make in my work.  Couldn't make the experience come alive in any way.  Couldn't get past a feeling of vague discomfort ... . Suddenly -- as suddenly as it had begun -- it was "thank you" time, and I was still alone in that room with no one to tell me that it was over, and that I could disconnect from the mic ... mouth dry ... panic ... but it was over, at least.

The interview had lasted all of 5 minutes.

For this I'd been picked up by a limo for the 45-minute drive in weekend traffic and past the countless homeless who inhabit the underpasses that border the freeways between Richmond and SF -- where that (patient and expensive) driver had waited for me through it all.  Then the long drive home feeling stupid and that it had been a total waste of everyone's time, and that the platitudes exchanged (called an "interview") were simply a part of some ruse so that everybody could feel as if they'd contributed something of value to life on the planet.

Despite all, I came away satisfied that I'd received the most perfect set of eyebrows in the world!  Maybe that's about the best one can expect in these chaotic times.
Posted by Betty Reid Soskin at 4:38 PM