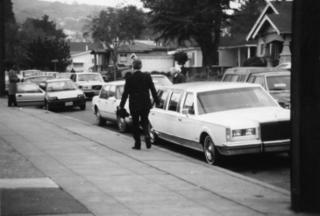 Lordy ... Philip Roth has done a retread on "Imitation of Life," complete with Anthony Hopkins playing Peola. Guess "The Human Stain" was more than that, but not a hell of a lot more. Nicole Kidman was superb in her role as aristocratic trailer trash (truly). The cast was marvelous. The editing faulty, or, the story sensationalized something that to this mixed-race woman is pretty ordinary. That American writers are still caught up in the drama of passing for white came as a surprise to me, and to find this the dynamic dark secret upon which a feature length film is based seems hardly worthy. The Roth book may be more compelling than the movie, but Louise Beavers and Nina May McKinney (I believe), and later Lana Turner did at least as well by the theme, I think. One has only to walk through downtown Berkeley to see every possible combination of racial mixtures. But then maybe it's still big news in Montana or Indiana.

But it does lead into telling you a bit about Dad:

Dorson Louis Charbonnet, 1894-1987, son of Louis Charbonnet (French Creole) and Victoria Morales Charbonnet (Islenos), was the third of 13 children (7 boys and 6 girls). He was blond and hazel-eyed as a child, fair-skinned and as handsome as Paul Newman (whom he closely resembled in his later years). He was third from the eldest of the brothers. His father was a noted engineer and millwright who designed and erected the huge cranes that loaded and unloaded cargo from South and Central America (bananas and coffee, chiefly) on the Gulf ports at Memphis and New Orleans. The sons were all craftsmen and builders of one kind or another. As with my Mother, I don't recall ever hearing my dad speak of school, though he was obviously educated.

Here on my bookshelves is a library of about 2 dozen very old leather-bound books that belonged to my grandfather. They are what is left of his engineering texts. There are old fading photographs of him on a number of jobs, one or another with dad or his brothers standing in the background. Among the projects is a huge New Orleans baseball stadium, Corpus Christi Catholic Church, The convent of the Holy Family Sisters (first black order of Catholic nuns in the US), all places still standing. The Charbonnets were a proud and accomplished family.

It was usual in those times for young people to complete the 8th grade and to then either continue to college (Xavier or Dillard universities, historically black) for a career in medicine or education, or, to enter an apprenticeship. Dad picked up his slide rule and trained under his father until the end of the 1st World War when he moved to Detroit for work in the auto industry.

Like my grandfather, he was a perfectionist. Dad was a very proud and formal man who was not easy to know, but was someone I knew as a man of real integrity who set a very high standard, but of a very special kind. He was a Creole. In New Orleans, that was enough to be.

Skip now to the Great Depression:

Dad had a few years in Detroit before news came of his father's death. Upon returning home to care for his mother, he joined his brothers in a rice mill that was a family enterprise. When that was destroyed by the great hurricane that sent us to California, he was temporarily employed at the Chevrolet Plant in East Oakland.

A huge piece of machinery that held the conveyor belts had dropped from the ceiling, taking a workman's life, I believe, and dad was hired to design and install the replacement. When the job was completed he was immediately fired. Someone had reported to the supervisor that Dorson Charbonnet was a negro. He'd not passed for white, as far as I know (or at least he never included such an admission in telling the story), but one would never have guessed by his physical appearance. That would never have given him away.

There were simply no jobs at the time, not for anybody. For a while, Papa George got him hired as a waiter at the Oakland Athletic Club. Dad in a white apron, I can hardly imagine it. But it was to get worse. Mother's brothers, Lloyd, Fred, and Herman -- were all working for the Southern Pacific Railroad as Red Caps and dining-car waiters. At their urging, Dad went to the hiring hall in hope of getting a job on the railroad, but they wouldn't hire him at first because he wasn't dark enough. After convincing personnel that this was, indeed, their negro brother-in-law, he was hired as an attendant on the lunch car and traveled for years as such. My proud talented capable engineer/millwright father was now "Boy!"

It wasn't until the mid-forties that he was allowed to join the carpenter's union. I suspect that he by that time was crossing the color line for the purpose of employment. He later returned to work as a millwright and was in charge of rebuilding the machinery at Albers Mill after a huge fire. Then to Grosjean's Rice Mill, also on the San Francisco waterfront, where he designed the process and machinery that coated rice with B-vitamins. He again came into his own in his field of expertise, but it had taken a lifetime, years of humiliation, and a second World War.

But then, in looking back, I'm not sure I did either. My kids and I are still improvising our way through life -- only I now feel a little less responsible for outcomes, but that's a fairly recent development.

In tonight's film there was a brief sequence about (Hopkins character) Coleman Silk's father. It made my skin crawl as a shiver ran through my body. It depicted a proud light-skinned black man waiting tables in a dining car -- being called "Boy" by a white passenger. I'm not sure I'd ever really appreciated the depth of anguish and humiliation that must have caused my proud father. My reaction was visceral -- the feeling is still with me as I write.

We became closer as he grew older.

On the night that he died, I was lying at the foot of his hospital bed listening for his last breath -- and when it came, I recognized it instantly -- long, steady, and ... final.