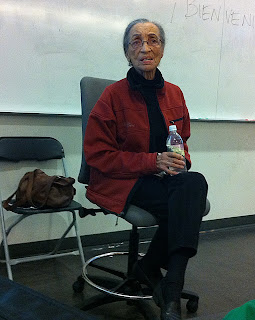 While writing the last entry Dorian called to ask if we could make a trip to the fabric store for some yarn she needs for a project.  This meant driving to the mall, waiting in the car under the protection of our blue handicap placard (a privilege almost equal to having valet parking) while she makes her choices.  This sometimes involves a generous amount of time -- but that's what crossword puzzles were meant for, and I always keep the latest New York Times magazine under the seat for just this kind of opportunity.  And such errands also allow time for chewing on whatever is left unprocessed in life that either was initiated by writing, or, is resisting resolution.

My mind was still occupied with the S.F. State protest of 40 years ago, and I remembered that -- (and long before blogging was even a word)  I tended to write accounts of significant events for myself.  Since these were rarely shared and certainly not meant for anyone else's eyes, my files were bulging with what I now see as first-person accounts of historic events.  Who knew?

All that is to say that somewhere in my files is that "first-person account" of that dramatic confrontation on the S.F. State campus.  My Humboldt experience suggests that it's important that I add that document to this blog (maybe under Cbreaux's Annex?).

And it is critically important to resist the temptation to make the corrections that 89 year-old far more experienced Betty might be tempted to do -- (The original was pre-computer; typed on my trusty IBM Selectric without SpellCheck or the editing capacity now available.)   I know that I must simply scan the document as is, typos and all.  As I recall, it's polemical and filled with youthful hyperbole, which may be precisely why it's important to not allow myself to try to temper young Betty's voice.  Maybe that's where the value is; value to preserving and revisiting that woman-that-I-once-was involved as a mere bystander in a major confrontation that changed the very nature of educational institutions and democratized the process in ways that bled out into every other institution and pointed the way toward freedoms promised but more often denied.

And I was only a spectator to social change.  I was on campus that day with two UU ministers (Revs. Aron Gilmartin and Harold Wilson) in a quest for understanding of the headlines we were reading almost daily.  Did I consider myself a political activist?  No.  Not then, and not even now.  When I saw the words describing me written out on the whiteboard on Thursday morning in that classroom, it was jarring.  All of those titles were endowed after the fact.  They all represented simply Betty in the process of living of a life and responding intuitively to whatever presented itself.  I recall when I first saw -- in print -- myself described as a cultural anthropologist, I had to look up what it meant!

Now I need to explore those files for that paper and hope that I don't lose the sense of its importance in the process -- and opt out of posting it.  At times second thoughts may stifle creativity.  The Sisterhood will be happy to get it, and will use it well.
Posted by Betty Reid Soskin at 3:09 PM