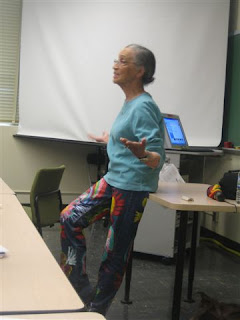 It's over -- but maybe it's just another beginning -- this newest chapter in the remarkable life of Betty ... .

The Humboldt experience will mark the place where so much came together for me -- at a time when it was crucial to my next steps.

I'm in one of those periods where life is unfolding at a rate that defies understanding, and when I haven't the luxury of time to process all that is happening to me and to my ability to make sense of the world.  I've lived these periods before, but never with such a sense of urgency and import as now.   Yesterday at Humboldt State University before combined classes of young students I was a teacher.

I may have finally come to terms with the appropriateness of May 14th and the commencement ceremonies -- as the place where academic achievement equates with life equivalency.  I'm not the first, and I'll not be the last.  There are a host of extraordinary ordinary folks who have been honored by the academy, legislatures, institutions, for having taken the more circuitous route toward the same goals yet arrived at the same place having had impact along the way.  I think of cousin George Allen, a grandson of my enslaved great grandmother, Leontine, who rose to be president of Southern University -- only the second generation out of slavery, and the many African Americans of note who followed. 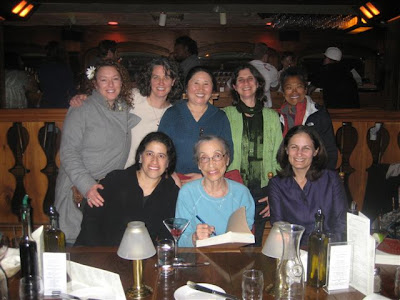 Most important, I discovered a sisterhood that exists on that campus that exemplifies the changes the world will need in order to survive the lightning quick rate of change that waits for no one.  This cadre of young teachers have an excitement about them that one can only hope is reflected widely across the academy.

I rarely read back through my blog, there's
little time for that, so I'm not sure I've written about the experience of sitting in a Berkeley meeting of politically progressive elders -- mostly former east coast "red diaper babies," now grown old --  as they discussed just how we were going to change the world for the better by whatever means necessary.  These were white-haired "revolutionary" veterans of peace marches, and "Save the Whales" and "A Woman's Right To Choose," etc.  That was in the afternoon.  That very evening I drove to the Fruitvale District of Oakland to the Nu Upper Room, an artist's collective that met in the historic old Masonic Temple where the Hip Hop generation -- guided with love by guru Rafiq Bilal -- was hosting a cultural revolution of its own -- and I discovered that those goals that were being fought for so earnestly by those Gray Panthers earlier in the day had already been achieved across town and by nightfall!  One simply needed to change the lens and tilt the viewfinder a tad and nirvana was a reality.  Here were young people of every color and ethnicity; visual artists, dancers, playwrights, poets, gathering in the name of black culture and honoring it and themselves in ways that were stunningly meaningful.

It was so in Arcata.  Instead of idealistic black revolutionary Hip Hop Guru, Rafiq, here was this amazing sisterhood made up of Christina, Wurgil, Maria, Patty, Karla, Janet, Lorena and Barbara -- all leading eager and inquiring young students in an exploration of subject matter that only a few decades ago were being so valiantly fought over in our educational institutions.  And, yes, I was in that crowd  in 1968 when jauntily tam o' shantered S.I. Hayakawa stood on the rooftop of the Student's Union with his bullhorn taunting the crowd below in that dramatic confrontation over the resistance to the creation of an Ethnic Studies Department at San Francisco State.  That scene ended in tear gas and law enforcement officers on horseback swinging truncheons while plowing through a mass of determined students and supporters -- a sign of the times.

On the long drive home, at Laytonville, I found myself driving through a pouring rain sobbing convulsively!  My personal storm lasted until the outskirts of Willits many miles south.  It was a long but cleansing drive through magnificent redwood and rushing river country that I'll remember with awe for the rest of time.

And how strange that I hadn't found closure on the S.F. State event until this adventure at Humboldt State University, some 40 years later.

Connecting the dots has become a profound ritual in these concluding years.  Maybe that's reason enough for recognition on May 14th. Maybe it simply means acceptance of my role as "first source" to a history of some of the most tumultuous eras in our nation's narrative -- a time when the social landscape was altered for all time, -- and I've been witness to that history and have lived into the actualizing of what is no longer seen as alternative, but essential to the education of whole persons; whole young Americans.