Just when I sense that I'm beginning to take myself too seriously ... look what happens. 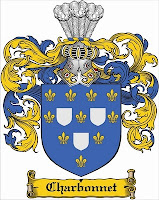 First there was Tutt (another Charbonnet stranger cousin who appeared magically from cyberspace) to inquire if I knew of a Charbonnet family crest -- a Coat of Arms?  I was delighted that there just might be such a thing somewhere, but punted by sending an email to Cousin Paul in Baton Rouge, the arbiter of all things Charbonnet from his side of the family.  Surely such a thing could hardly have emanated from mine.  This was a European thing.   Our side is into ceremonial masks and totems; no crests. You may recall -- if you've been reading my blog for a while, Paul and Shirley -- from the melanin-challenged side of the family -- actually flew out to the West Coast to meet me a couple of years ago.  It was a grand reunion that found us more confounded by our politics than by race.  Paul is a devout conservative  Republican and I, well,  you know the answer to that one.  But politics aside, we were absolutely delighted with what we found in each other and celebrated coming together after centuries of separation. 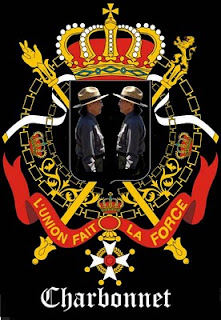 The next day Tutt followed up by another message announcing that he'd indeed found one, and that he would share it with me as an attachment.

Meanwhile, Paul responded with "I don't know of any, but were it possible to do so" this is what I would design in honor of our most senior and illustrious family member" (I'm paraphrasing).  And, so saying; voila!

Maybe I'll have it emblazoned on a tee-shirt or make it into a flag to hang from the antenna on my little Honda.  Maybe two -- one on each side a la diplomatic service!

I can just imagine getting a fit of the giggles in the middle of some self-induced profundity -- just thinking about this image!

I can just imagine historic St. Louis Cemetery in Old New Orleans sending up a roar as the ancestors roll over in their crypts! ... while in another part of the graveyard -- waaaaay over there in a corner --- others are dancin' for pure joy at what has come to pass.  I've always known that there were those down through history who were always trying to get it right; and that history has mostly been written by those who didn't.  And that in our generation, we've moved closer to that place of racial harmony that we all must reach before true democracy is replicable throughout the world.

Maybe it was always a family thing.
Posted by Betty Reid Soskin at 11:26 AM