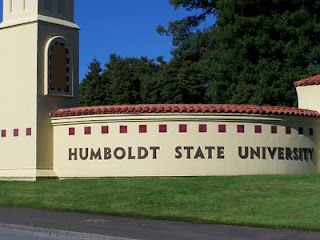 When the call came from a member of the faculty at Humboldt State some weeks ago, it seemed a likely add-on to end the busiest time of the year for me... .

She told me in that original email introduction that her classes had been reading my blog after being introduced to me through a few paragraphs of Elaine Elinson and Stan Yogi's recently-published history of the ACLU in California entitled, "Wherever there's a fight."  Elinson had interviewed me a few years ago, and had later sent a copy as a gift -- and before the end of last year we shared the podium at the Japanese American Methodist where we were panelists.

Meanwhile, those classes have apparently viewed the videos and clips on my blog and after doing so faculty invited me to spend a few days on campus meeting with classes in Women's  and Multicultural Studies.  I have no idea how this will play out, but I gather that the format will be informal and that I will be primarily in a Q&A setting -- that's where I'm most comfortable, anyway.

It seems reasonable to ask for annual leave from work in order to have this on-campus experience as a preliminary to my upcoming great adventure at the California College of the Arts in May.  I've had a difficult time getting into a place where that whole thing doesn't feel waaaay over-the-top and downright weird!  An honorary doctorate, indeed!  But maybe if I could just get out of the maelstrom for a few days, I can make some sense of it. May is coming up fast.  We're at the point of having to send in the invitation list, measurements for cap and robe, begin to form a commencement address to deliver(!); and all of that has to come from somewhere within -- some place where I'll need some stillness to reach.  Perhaps Humboldt State nestled in the old growth redwoods is that place.

I've never written a speech; been "uploading" truth now for years with nary a note nor clues chalked onto cuffs or palms.  But it feels as if a commencement speech needs more preparation than that; more evidence of study and effort ... but whenever I try to cull those gems of wisdom that occur deep in the night to wake me from sleep ... in the morning they've vanished without a trace.  And you know what?  I know that it's in me somewhere and will emerge -- maybe as I stand on that dais and not a moment before -- but it would be so comforting to feel certain that I'm deserving of such an honor.

Tennyrate, I was offered the option of being flown in (50 minutes out of SFO on United), or the only other alternative -- to make that 5 and-a-half-hour drive north up Highway 101.  Sounded so enticing -- given the reasons above -- until the past couple of days when the storms have been relentless.  I feel so in need of that 5 hours transition time between lives.  I will be driving north into rain country.  The snow level has been as low as some of the Bay Area foothills this weekend.  Now I'm anxiously watching the 5-day forecast and hoping for change.  It doesn't look very promising.  However, the die is cast, and I will leave early on Wednesday morning -- with a couple of audio books on CD (Mark Twain as narrated by Matt Damon and Howard Zinn's History of America which I've never had time to complete).