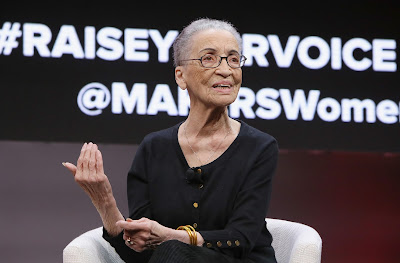 Bob, my son and manager, has been warning me to be prepared for my life to become more complex than ever with the publication of Sign my name, but despite his attempts at preparing me for this, the effects are almost overwhelming ... .

The moment my on-stage interview ended and I was backstage being detached from my microphone, Dyllan McGhee, founder of Makers rushed back into the hubbub of behind-the-scenes calling out excitedly as she entered, " she's trending equal to Hillary!"  I had no idea what this meant, except that it was surely something special in this world since I was aware that Hillary Clinton had been last year's honoree and at a time when she was a candidate for the presidency of the United States of America.  But what on earth did "trending" mean?  This was a familiar term from the world of social media, but it was not something that I'd ever had to concern myself with before now,  so now that it mattered, I realized that I had no idea what it meant -- yet here it was being applied to me.

It was clear that this was BIG!  Hollywood BIG!  Maybe even national BIG.

After being de-miked I left backstage and took my seat back in the audience to a very different atmosphere.  Something new was in the air.  I must have hit it over-the-fence, whatever "it" was, and suddenly everything was lighter as if the room had been filled with helium. 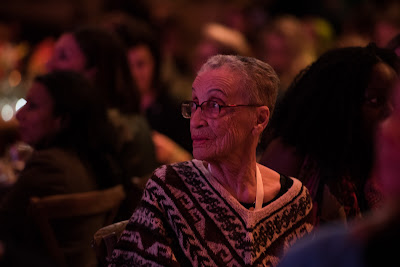 I suddenly became aware from looking at a monitor just below and beside the stage upon which the text of everything in that space was being streamed throughout the nation, that it wasn't just the 400 attendees that I'd just appeared before, but also an unseen audience of countless others who'd been witness to what was occurring in this room.  The full implications of this reality hit me with the force of such ferocity that I took my seat in silence while all of this settled in to fulfill Bob's warning.

Things would now be different than before.

This was the future that I'd grown into, that had grown out of the work that I've been doing over the past decade.  This was where it was all leading to.  But why at such a late hour, and at what cost?

Is this what it's like to be discovered by the World?

... but it would certainly be great to have my old hair back ... maybe I need to buy me some.  Nah.  There are just so many follicles to a lifetime, and I've apparently used mine up.  Wish I'd paid them the proper respect while cleaning my brush.  To think that I just scraped them out with my comb and flushed those precious strands without a second thought.
Posted by Betty Reid Soskin at 12:47 PM