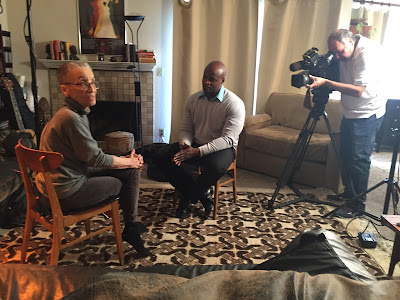 But nothing short of "cool" can describe the turn life has taken over past week, but "Cool" is a near miss, even when I capitalize the first letter.

On Monday it was an evening of book-signings (my first) at St. Marys College in Moraga hosted by Sharon Sobotta, executive director of the Women's Center there.  On Tuesday Bob and I drove to KPFA-Pacifica FM station in Berkeley for a taping with Cat Brooks (wonderful interviewer!) of an hour-long talk for UpFront programming.  On Wednesday it was Paul Chambers of local Channel 2 (our FoxNews) who came to my apartment with his cameraman/editor to film a piece for their Black History Month programming. Thursday's assignment was a telephone interview with a delightful young woman for the Audubon Society.  Then came Friday that was jam-packed with interviews -- first NPR's Forum with Mina Kim followed by televising a piece for KQED's Newsroom with Thuy Vu (even more beautiful in person) after a meeting in the mirrored makeup room where I fully expected the first step would be sand-blasting, but that proved useless so we settled for the usual applications of potions and dips into exotic tiny pots of various creams of tints and colors applied with brushes of all sizes and shapes by the ultimate professional (who turned out to be from Richmond) -- a fascinating process.

There's something about that ritual that is a reminder of the child, Betty, playing dress-up in my mother's closet and dressing-table; interesting throw-back to a time of innocence ... . 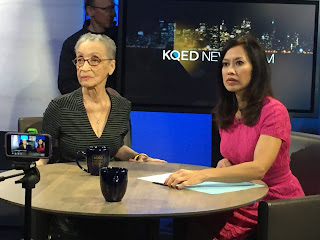 Following the Newsroom taping was a Facebook session with Thuy that was unexpected but manageable since I'm so far beyond being taken aback by almost anything that I've begun to appear non-plussed (always loved that word but never needed it before).


Being a D-List celebrity is beginning to hold fewer surprises now than before, and that's good.  Having a chronic dry mouth takes some getting used to but having rushes of saliva that threatens to ooze from the sides of your mouth when you're being filmed in Hi-Def TV tends to make one plussed!


When the filming was over and we found our way to the elevator for the descent into our normal reality for the drive home in the usual rush-hour traffic it all began to feel surreal.  The drive was relatively uneventful except for the stop at home to pick up my forgotten wallet, then to the supermarket to re-stock foodstuff.  I was surely overdressed for the checkout line but being in civvies, I actually attracted less attention than when in uniform.

After a day like that one would think that I'd surely be waiting to see the public appearances, wouldn't one?  Not so.  Came home and changed into my pajamas (in the middle of the day!), propped myself upon pillows -- turned on the idiot box to watch the Olympics, the goings-on in Washington, and today's antics with our Leader of the Free World, eventually dozed off for hours and missed Newsroom.  Dorian telephoned to say that she'd seen me on the TeeVee -- that's when I remembered ... .

I then dug my I-Pad out from under the blankets where it had been stashed, located NPR's Forum in the archives, listened closely, and was pleased.  Later I may watch Newsroom, but I really much prefer to just do the pieces then move on.  Watching myself is something I prefer not to do, and I haven't the vaguest notion just why that is.  Listening to myself hasn't the same effect.  Crazy, right?

But in the listening, I believe that I done good!
Posted by Betty Reid Soskin at 1:26 PM