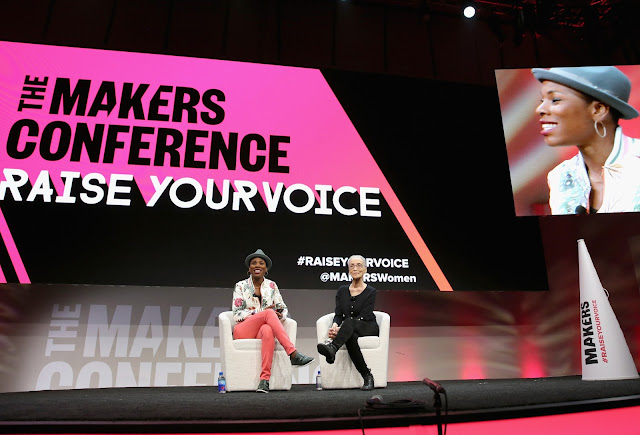 After an uncomfortable and tentative live interview on FoxNews, and a less than satisfying experience on the Hallmark Home & Family show (through no fault of my gracious hosts) I arrived at the Noya Center in Hollywood for the Makers Conference, "Raise your Voice!" and it all came together magnificently.

Prior to the announcement that I'd been chosen as this year's honoree by this hugely successful women's organization, Makers was unknown to me.  I'd suppose I might blame that on my having gradually but definitely begun to drop away from all those causes and issues that are outside the parameters of the National Park System.  My work with the NPS has truly become all-consuming, and as that aspect of my life rose to dominance, all else except my immediate family has begun to fade into the background.

You'll want to know that past recipients of this great honor has been such illustrious women as Justice Sandra Day O'Connor, feminist icon Gloria Steinem, and last year's presidential candidate and former First Lady Hillary Clinton.   One might well ask (as I did) "why me?" which remains a mystery to this day, but these days I question not.  I just show up to watch what happens! 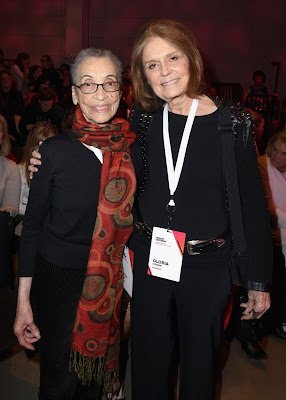 On Monday morning, February 5, I arrived at LAX and promptly lost my cellphone.  I made my way to Baggage where I was to be met by "ground transportation" (that I assumed would be Uber or Lyft) identifiable by someone standing there holding a Soskin sign.  Got to the lower level thoroughly confused and feeling old and irrelevant (despite all) and looked for my phone and discovered it missing.  Went to Lost and Found to report it having been left on the plane so that it could be retrieved before the next departure ... nothing.  No driver holding a "Soskin" sign.  No idea what to do or whom to call since all of that information was stored (of course) in my phone.  The driver could not reach me because he only had that number.  Decided to stand out at the curb in that impossibly busy terminal and just wait for someone to claim me.  What else does one do under such circumstances?

In my active imagination, I must have wandered between known worlds for perhaps 15 perilous minutes -- which seemed like hours -- until unknown forces took over and the Universe righted itself.  It was great to learn that this even happens in Hollywood.

After gradually subsiding waves of panic, a stately uniformed limousine chauffeur rose magically at my elbow, rather tentatively,  holding out a cardboard sign with Soskin printed prominently on it before a thoroughly addled old woman sitting on her luggage with a vacant stare.  I was completely outclassed by this setting, and felt it,  and by his courtly manner, it was clear that he knew but was willing to play the game.

Temporarily (as one does in such cases) I cast eyes heavenward and praised the God that I tend to believe in only under such circumstances, otherwise I'm agnostic, of course.

We crossed into the garage -- where such elegant machines are parked for brief periods -- and my driver  whom by now I realized spoke with an exotic foreign accent ushered me into the luxurious back seat with the darkened windows to protect anonymity for those needing it, and we were soon on the infamous L.A. freeways en route to the Universal Studios in Burbank to tape the Hallmark show from twelve 'til three.

I sat in that posh limo feeling completely out of place, out of character, and wondering (embarrassingly) just how I would get through the rest of this day, this conference, this City without any idea what, who, why, etc., with no itinerary, agenda, no cell phone to guide me?

How on earth could this organization of brilliant young women have wasted their "honorations"  (and, yes, I know that isn't really a word) on someone so stupid and careless as this year's honoree?  Besides that, these brown age spots were really going to show through the makeup, and would they notice that my eyebrows (having disappeared along with the rest of the time-limited hair follicles) were non-existent, and I wasn't always certain that I'd applied the pencil where it should have been drawn ...).

But those insecurities only lasted a few hours before the world got back on its axis and JOY! (yes, joy in italics) began to reign!