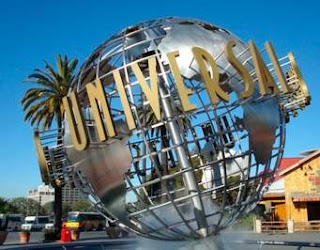 Yup!  Here I am at the Universal Studios in Hollywood ... .

Upon arrival after the long drive from LAX we arrived at the studio -- drove past vaguely familiar buildings of various historic periods -- easily recognizable as stage sets from movies seen long ago, to a series of trailer villages where the Hallmark shows are shot.  It all has a temporary feel to it, as much of Los Angeles has had for me over visits over time.

There I was ushered into my green room, comfortably furnished with two sofas, a TV monitor, hanging space for change of clothing.  After a time guided to the make-up trailer where several specialists were waiting to transform and "youth-ify" those of us in need of such, and -- in time -- onto the set for the taping of my segment of the Hallmark Home & Family Show.

All the while, my chauffeur had been waiting, and promptly at three he magically materialized for the trip to Hollywood and the Makers Conference.

But first there was check-in at the London Hotel(!), and I have never nor will I ever again know such luxury!  My suite (most of my Richmond condo might well have fit into it) consisted of the most luxurious bathroom on the planet, the king-sized bed area, then a sitting room looking out over whatever part of Hollywood we were in -- had reached the London Hotel somewhere along the legendary Sunset Boulevard.

My limo lined up behind the others waiting to gather in their temporary clients (me being one such), and the thought ran across my mind that I'd never seen this many luxurious chariots in one place before, and that this hotel must be filled with many more of the 1% than the likes of me.

Took the elevator to my suite on the 5th floor and gasped as I entered into my designated space for the next 72 hours!  WOW written in italics and followed by 50 exclamations point is the understatement of the year!  And here I was without my cellphone to record it for later savoring back in my ordinariness. It was here that we met Luciano, our limousine chauffeur for the entire time of the Conference.  He would pick us up (granddaughter Alyana and me) each morning promptly at 7:30, deliver us to the proper venue where we would spend whatever time in "Neverland", would wait for us, wait at each site until time to deliver us back to the London after events had ended in the evening.  Can you imagine? 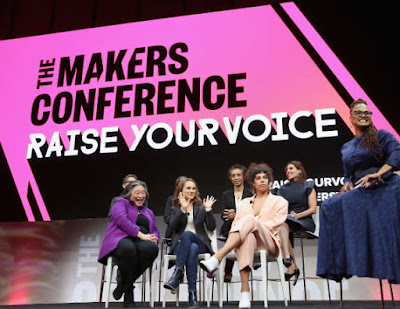 I'd invited Alyana, who is attending UC Irvine on a 4-year scholarship and in her senior year, to share the Makers experience.  We had a great time in our borrowed celebrity status that would be fleeting for me, but that might be a great beginning for a neophyte communications major where she would be exposed to the highest level of "makers," women who were the leaders in their fields.  Her heroes were here to inspire, and who knows where this glitzy adventure might lead?

For a young student of color who is studying in the field of media -- to be in the presence of the celebrated screen director, Ava DuVernay, was a gift to be envied, and something this grandmother hadn't dreamed was even a possibility, yet here was that gift in this world where dreams are finally attainable.  What a magical thing ... .


But by far the most meaningful time for us both proved to be in the later hours -- after the noise had died down -- after a day of ogling and nudging one another constantly as we encountered more celebrities than we'd ever seen gathered in one place -- and we were in our fancy hotel suite in the very first deep grandmother/granddaughter conversations we've ever had.  In Nana's words,  "we got past the "how's school/how's work" stuck place and into the deep grownup stuff like "what if I told you that I might not ever want to marry," and "have you ever had a lover, Grandma?" (of course!).  It was a bridge crossed from which we'll never retreat ... and how memorable it was for us both.