A few questions we, the students of
WS 107: Women, History, Culture at
Humboldt State University,
gratefully and curiously submit for
Ms. Betty Reid Soskin's
consideration on this Wednesday, March 23rd, 2011


1.  I heard about the New Orleans flood in a sociology class last semester.  To my understanding the government chose to bomb the levees in order to sacrifice one part of town and save the other from damage. What are your thoughts on the racial/socioeconomic injustice of this? 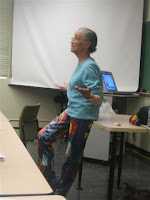 Answer:  I'm sure that it was far easier for such decisions to be made arbitrarily in those days without reference to the lives and property that would be sacrificed than it would be today.  Though that varies still depending upon how much participation occurs in the public life of cities and townships by representatives from all races, ages, cultures, and economic classes.  In 1927 a few powerful men made decisions based upon the threat that the Mississippi's rising was having on those parts of the city which they controlled and protected.

Hurricane Katrina brought into focus the corruption and misuse of power that still remains in many places, despite the greater representation from a broader segment of the community, so that many of the problems of access to power have resisted remediation, and many of my relatives who fled the floods  -- as our family did in 1927 -- have not yet returned to New Orleans.

2.  Beside the future generations of your family, do you have anyone else that you're specifically targeting with your blog?

Answer:  Not particularly.  It would have been hard to believe that anyone but those close to me would have any interest in my thoughts in the year 2003 when I started this journal.  After awhile it was clear that at least a few total strangers were following my blog, but it has never attracted more than limited interest to my knowledge.  I would never have dreamed that university classes would be using these thoughts hastily posted at the end of my day in the quiet of my home as content for study!  I've never received more than about 2 dozen comments over all the years since all this began, so it was not hard to believe that my "audience" was limited to my own family and a few friends.

3.  In a YouTube video you appear in, you mention having not listened to yourself up until your midlife.  I was curious about what made you listen--was it a growing/learning process, or a radical shift in your life that immediately changed your perspective?

Answer:  It was a gradual thing that is only apparent in retrospect.  I'm not sure when I noticed that others were listening -- and that I might be worth listening to.  Maybe it was when I first was elected to serve on a board of some sort and my self-worth took a leap. At some point I became more inner-directed and ceased to be totally led by external forces.  That came fairly late in life, though.  Some of it came earlier from becoming a parent and needing to "know" for the sake of my children as they were depending upon my guidance.  That can make one grow up in a hurry.  At first I was not nearly as impressed by what I knew, but with how little was known by those around me compared to how much there was to be known.  As these things came into balance -- as I started to mature, my own inner voice became louder and more insistent.

4.  I read that in the 1960's you wrote and performed songs, many dealing with civil rights; what was that like and what role does music play in your life now?

Answer:  When my daughter, Dorian, was born brain-damaged in 1957 -- and as she slowly began to develop cognitive skills, I noticed that she retained what I sang to her more effectively than what I said to her.  I made up songs to match the rituals of washing hands, taking baths, putting on pajamas, and discovered an innate ability to compose.  This coincided with what was happening throughout the country and with the advent of folk music, coffee houses, and civil rights marches -- all expressed in song.  It was an easy transition into those movements at an age where composing and singing my songs provided a way for me to "travel" in my imagination without leaving home where I was needed by 3 growing young sons, two aging parents, the growing realization that my little girl would never reach adulthood, and a failing marriage.  Through creating my songs it was possible to leave it all with Dorrie holding onto the hem of my dress; it was pure escapism at first, but when I listen to those tapes (never published), I'm impressed with how fine some of that music was.

And, no, I left "Betty the Artist" somewhere in the early 70's and began to live out of other parts of myself.  My interest and enjoyment of all forms of music is still strong, but only as a member of the audience.  I suspect that -- though there were opportunities to pursue life as an entertainer at the time -- it would not have in any way matched the satisfaction I found in living off my other "edges."