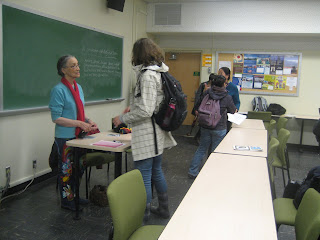 Home from work today waiting for a plumber to repair one of life's unexpected contingencies; so while waiting I'll continue our conversation ... .


29.  What advice would you give a woman who is trying to make a career in a basically all male profession; for example engineering?


Answer:  I'm not at all sure that I could give advice to anyone since my life experience did little to prepare me to do so.  However, at this late date I find myself in a somewhat gender-specific role of a park ranger among a staff made up, primarily, of  young men -- and all that seems to matter is that I do my job with integrity and to the best of my ability.  Maybe that's all there is to it, at the end of the day.

30.  How exciting is it to see the world change so greatly in such a short period of time?  Is it exciting?  Or scary?  Interesting?  The inventions ... mannerisms of people ... war tactics ... how we treat one another ... cell phones ... have all changed dramatically since the early 1900's.


Answer:  Having lived such a long life that "change" and "progress" seems to have happened with lightening speed!  Looking back -- it all went so fast -- and so much of it with little advance warning. Hope lies in the fact that so much has occurred over my lifetime that has thrust us forward.   I have the eerie feeling at times that I'm living in the future that I helped to create as time began to fold in on itself!

Having grown from Betty the Little Girl for whom Christmas took 365 endless days to return each year -- to Betty the Elder for whom Christmas now occurs every six weeks, is dizzying.  The illusion of time is stunningly under-appreciated.  I'm as fascinated by Einstein's Theory of Relatively and Stephen Hawking's black holes and parallel universes as I once was at the mysteries of the virgin birth and the resurrection, and with little need to choose between, but to consider them as acceptable conflicting truths for those who so believe.

Much of scientific theory and religious belief I now think of as the way in which various civilizations have explained the nature of the universe to themselves down through the ages.  I suppose that one of the hallmarks of maturity may be an increasing ability to live comfortably with uncertainty, though I'm less drawn to religious thought these days, and more to the continual unfolding of Darwin's Theory of Evolution and to current studies of an expanding universe.  I'm struck by the way that science projects forward with hypotheses to prove or disprove which thrusts the edge of what is known ever forward -- while religion continues to reach back in time for its references, and measures new discoveries by how well they fit into belief systems set in antiquity; centuries before written language was widespread.  People of goodwill have debated interminably which of these leads to salvation, and I'm sure that it will not be solved in my time; but at this stage, I opt for the scientific approach, even though I can barely grasp the meanings of current writings from the sages of the academy.  I'm more intrigued by their mysteries.

Cell phones?  Who on earth could ever have predicted such a thing?  I came from a time of two tin cans connected by a string!

(I'm not sure that my answer bears any relation to the question posed, but it's where my mind went -- maybe to the inner change that is the more important to me.}

31.  You mentioned that one of the reasons you began your blog was because you had a particularly hard time reclaiming the history of the women in your family.  Could you please illustrate a little more on your process of discovering those stories, if you were able to, and some of the reasons why you think those stories in particular were harder to uncover?  How do you feel that the loss of women's histories within families affects the broader narrative about women in history?


Answer:  There's no mystery about why women are so hard to trace; their names changed through marriage, and in the event that there has been more than one marriage, the mystery deepened and they became lost.  If this is true in the search within families, one can imagine how it affects the story of women in the larger society.  As an amateur genealogist, it was frustrating, thus the birth of my blogging so that future family researchers might have the benefit of not only my life story, but all of those female ancestors whom I've been able to place into the record.

32.  In one of the videos you tell a story about a high school experience you had in drama class.  Specifically you mention how the teacher, though obviously stunned by your performance, wouldn't cast you because of your race.  You mention that your reaction to this as thinking, "Oh, of course, how could I have thought otherwise?"  I guess I was just wondering how experiences like this have affected you, and whether or not you think that the societal messages you received as a young black woman are similar to the ones received by young black women today?  If you believe they are different,  how would you describe the change?


Answer:  I suppose that my response to the situation had to do with the fact of my acceptance and understanding of the difficulty of her position.  I can remember there being such mixed emotions at the time, but I was not mortally wounded by the situation (though it was burned into my memory where it remains to this day).  I understood both her recognition and appreciation of my performance and her regret that she couldn't handle a confrontation with the prevailing attitude at that time in that community.  There was little for me to do (since I felt personally supported by a teacher whom I truly liked and respected, despite the circumstance in which we found ourselves), but then immediately switched to a class in public speaking where such a situation might be less likely to occur. It was a matter of needing self-protection, and taking control of a matter that I had no answers for at the time.

I'm not sure that a young black woman of today would tolerate such an assault upon her dignity, and stifling of her ambitions.  I'm certain that she should not since doing so only invites further abuse.  But then, the institution is on the side of today's student.  At that time it was not.

33.  Why do you think there's a negative connotation to the word "feminist" in mainstream America, even among women?


Answer:  Haven't a clue.  Maybe because the declaration of emancipation of today's women upsets the status quo and re-defines the traditional role of the men in their lives as well.   But that's only a guess.  About the women for whom the word "feminist" is not acceptable, that's less understandable, but at least in my experience the anti-feminist women also tend to be relatively conservative in other matters.

34.  How difficult was it to get substantial information in regards to your family tree?


Answer:  Surprisingly, it was extremely easy, given the availability of Internet access which introduced me to the Mormon's Family History Center with its tremendous resources and volunteer assistance to the amateur researcher.  Once the search begins and family names are entered into the system -- the mysteries begin to unfold and -- added to that, other researchers from everywhere begin to find you and for comparing notes and, over time, unbelievable discoveries begin to be revealed.  I've found related family researchers across racial lines in all parts of the country and the world.  At one point I was sent 26 generations of my maternal line by a family researcher in Louisiana.  To have lived into such a time so rich in possibilities is almost unimaginable.

35.  As long as you've been in your line of work (as well as your lifetime ) what is the greatest change for the better (or worse) that you've observed as far as the evolution and a result of social justice and CRGS (critical race, gender, and sexuality studies) activism?


Answer:  The changes have been monumental -- more than one might have imagined even over such a long lifetime.   The rate of change has accelerated dramatically so that generations that use to be measured in lifetimes are now measured in 5 years or less.

My grandfather could tell my father what the world would be like when Dad reached adulthood -- and it would pretty well be realized as predicted.  My father could predict and prepare his children for what our world would be like, and to a large extent, he was right in what he envisioned.  The changes that occurred between my birth and those of my children were so extreme that the world they inherited from my generation was no longer predictable.  My grandchildren are living in a world that -- even with my admitted intelligence, sensitivity, and intuitiveness -- is a total mystery to me and, I believe, to my generation -- the rate of change has so dramatically accelerated over time.

(This conversation is almost over.  Will conclude with the next post)
Posted by Betty Reid Soskin at 12:25 PM