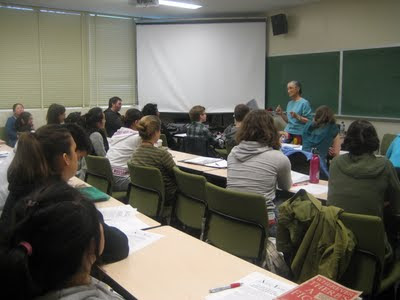 7.  I read through your blog and got hooked from the start with all the rich language and moments of humor.  There was one particular line in the post about the jury summons which said, "I know that this is one of the rights guaranteed by the constitution to any American accused of a crime.  The only way those rights can be guaranteed is if ordinary people like me participate in the process.  I have never, and I would never opt out," and I was really struck by that being most people I think are rebelling against the system -- want those rights but not want to participate to get those rights.

And I would love to hear her talk about that the aspects of life where one might have to put aside say whether you think the justice system is doing good or say whether you think you are just too busy because you know that to get other rights doing the things like jury duty are necessary even if you don't support the system whatever it may be.


Answer:  I understand the questioner's cynicism about the justice system.  I share it to a large extent, but to not participate for me is not an option.  It is the one in place, and, unless we play our part within it -- we may not develop the skills with which to make the much-needed corrections,  You can't make them from outside the system.  Somewhere along the line I lost the sense that there exists some evil "they," and began to see an active (or inactive) "we" instead.  From that point on, it became "my" imperfect justice system with need of my input.

8.  After working as a ranger and being a role model and leading people on tours around the park which has so much to share and seeing today's teenagers, what do you think is the best way  that we students can make a difference, and what do you see that has changed in the way students view the history that you lived through?

Answer:  I'm not sure when I began to see myself in context -- as an American with a citizen's responsibility for the maintenance of the Democracy -- but it happened somewhere along the way.  I would have wished that this had happened at some earlier time in my own history.  When it dawned on me that Democracy is not a fixed thing  created for all time by some "paternalistic old dead white guy slaveholders" who gathered together in Constitution Hall in Philadelphia to write the Constitution and the Bill of Rights, but, that it's dynamic; a living breathing thing.

What they created were only the blueprints of the ideal they willed into being -- and in order to survive the rigors of a constantly changing and growing nation -- Democracy must be re-created by each succeeding generation, and modified only after much deliberation by the representatives of the people, the Congress of the United States; by the Executive Branch; and by the Supreme Court.  It is this that my education failed to communicate adequately.  Once realized, I found myself empowered by the knowledge that the Democracy was dependent upon each one of us, and what we do or fail to do, individually, shapes our collective future as a nation.

Looked at this way, the country and the world could not afford for me to sit around on my haunches doing nothing!  My greatest fear is that your generation will not understand its individual responsibility of citizenship to not only learn to live with, but to be constantly creating positive change by participating in the most effective political system the world has yet produced.  People of the developing nations are risking their lives daily in order to replicate what we have as a birthright.

We don't need to know which direction is "right," the secret is that the correct pathway is found in the balances between opposing political forces.  Should the system yield to my wishes (of the moment) at any one time, it might not continue to serve my interests subsequently -- when I've become better informed and developed a different mindset. The greatest tragedy to befall our system of governance may be the gradual degradation of the multiparty system.  The need is for more voices and varieties of opinion to be expressed not fewer, and more of us leaning in the direction of what we believe to be positive change with faith that unseen others are leaning with us -- all that, plus the swinging pendulum with the power to self-correct.

9.  Why would the African American community volunteer to assist in the war effort (both as riveters and soldiers) for a country that has a history of exploiting them?


Answer:  Beats me!  But we did, perhaps in the hope that doing so might bring about greater respect from the nation.  Instead, the horrible abuses went on and the disappointment and resistance to change produced the Civil Rights revolution of the Sixties.  It was such an outrage to human dignity for black people to be asked to work, fight, and die to defend rights that we would not share in for another 20 years, but this produced a resistance movement that would change the nation -- not only for ourselves, but for all of those marginalized -- women, gays and lesbians, the physically and mentally handicapped -- and led to greater freedoms for many over the succeeding decades and into the present by forcing the country to confront it's hypocrisy and inequities -- it's brokenness.