Humboldt State University -- a conversation across the generations ... (continuing) 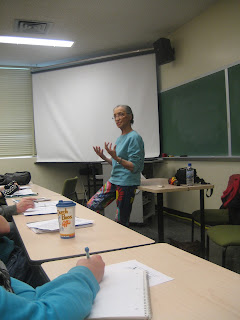 10.  Working as a ranger for the National Park Service you get to share counter-narrative stories about the war effort.  Do you feel that the government is making a concentrated effort to air these stories or that it takes the efforts of knowledgeable individuals such as yourself?

Answer:  My experience with the National Park Service has led me to believe that the nation is finally ready to face the conflicting truths that have remained hidden for so long.  History tends to slip into the "generic" when left without the complexities that occur naturally in life.

The mission of the NPS is to conserve and protect the nation's artifacts, natural resources, and stories -- and fortunately the home front era provides us with a rich store of women's changing roles, remarkable industrial feats, examples of conservation and reclamation, black history, dramatically shifting demographics, the shameful internment of Americans of Japanese descent, and much more -- but also that of average Americans struggling to move into a more equitable society while having to do so under an antiquated social system based upon white privilege that resisted change -- in stark contradiction to the very meaning of democracy.  I'm not in this alone, but with an enlightened Department of Interior and an Executive Branch which supports and encourages that work.

11.  Do you feel that living in the Bay Area gave you an advantage in defying the dominant narrative and in witnessing the full extent of social change over the years?

Answer:  One must understand that before WWII, the Bay Area wasn't much different from the rest of the country, politically.  It was in the cauldron of social change produced by the clash of conflicting values, attitudes, and customs brought into the Greater Bay Area with those who came to do the work that accelerated change and has continued to do so ever since.  Living in the Bay Area -- at the very edge of the continent; in the place that witnessed the birth of the atom bomb as well as the creation of the United Nations; and at the onset of monumental social change that would dominate the next two decades -- living among those who arrived daily by the tens of thousands over the succeeding decades believing this to be the most liberal place in the nation - and by so believing, made it so.  The Greater Bay Area is my definition of the ultimate self-fulfilling prophecy, and I'm so happy to have been a part of it as it evolved, taking me with it.  The Greater Bay Area's greatest gift may be that we lured the world through the seduction of the possible.

12.  How important do you feel storytelling is in changing social structures and giving people of all races and genders a voice?

Answer:  Storytelling provides models from the past that make possible a less precarious future by allowing us to preview systems and pathways from those who preceded us throughout the generations.  I'm constantly surprised in these later years at how often those innocent childhood conversations with Papa George while gathering berries or tying string beans to their slim poles in the kitchen garden -- rise up to inform the course of my life.  His mother and my great-grandmother, Leontine, known to all as "Mammå" was often the star of those stories, and to the extent that my life uncannily reflects hers in some important ways, -- and though she died eons ago -- her life is still having an impact on the present state of the union through the living of mine.  Maybe that's the power of storytelling as I know it.

13.  In the novel "Assata," Assata Shakur discusses various political groups, mainly the Black Panther Party.  How important do you think political groups are in advocating and encouraging social change?

Answer:  I cannot imagine the circumstances in which joining with others of like mind in pursuit of a common goal is not a good and proper thing to do.  It is in the best tradition of our democracy to do so.  To magnify one's voice by raising it in unison with those of like mind should be invigorating to the political process.  However, lending power to ideas by acting collaboratively can be perceived as a threat to competing interests when there is an imbalance in political power; which has happened in the past with disastrous results.  We saw that in the persecution of the Black Panther Party by CoInTelPro during the 60's.  The disruption of young lives, the tragic loss of many through state-sanctioned violence from an agency out of the control of the people -- poisoned the political environment by consciously creating disunity from within and havoc from without.

I do not believe that this negates the need to advocate and encourage social change, but reinforces the need to be ever vigilant, and to expose and eliminate injustice wherever it may be found.  But it might have been the high cost of attempting to do so in a nation not yet ready for meaningful change, and a reluctance to give up on the status quo.

14.  In a video we watched entitled "2010 Women of Achievement, Vision and Excellence awardee" you stated that it was very important to tell the complicated stories and history that was behind Rosie the Riveter Park.  How were you able to compile stories from all of the different areas of the park?

Answer:  I once believed that there was a grand conspiracy to deliberately eliminate everyone but men from history.  I've come to believe that what is remembered is dependent upon who's in the room doing the remembering.  To the extent that women's history, black history, and that of "the poor and the powerless," are absent from those conversations where it is determined what is significant, important, or, "of worth"  in a world dominated by male concerns -- each has been omitted from the record.  History of the home front is rife with glaring omissions.  Once I ceased to need to place blame, and saw the problem for what it was, it was relatively easy to begin to make the corrections.  Once I found myself in the room "doing the remembering" and discovered that the supporting materials were easily accessible, and that all it took was to reach into my own truths and  bring them forth in the belief that most were universal (I don't consider myself all that unique).  Then I learned to speak in declarative sentences with clarity and authority that invited challenges from those whose views of that history varied from my own.  (Out-living most of those whose memories differ from mine helped a lot!)  Once I learned to trust my own judgment, my voice gradually became stronger and others began to listen with increasing interest.

Research also revealed that there has always been -- throughout history -- those who were trying to get it right, and that history has been largely written by those who didn't.  Yet the patterns are clearly evident by the direction that our national compass has taken us in this, the 21st century.  We have been ever trending toward fairness and equality -- freedom and justice for all, and, over time, the nation is gradually fulfilling the destiny set forth in those revered founding documents.

Posted by Betty Reid Soskin at 9:51 AM