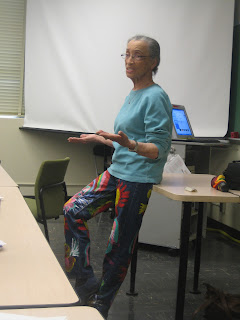 5.  Are you pleased with the current situation of women and equality or do  you believe there are major social and/or political changes that need to occur?  If so, what are those changes?

Answer:  I  think we're still in the middle of the movement to empower women in the home, the workplace, and in society at large.  We've gained in many ways,  but there is still work to be done.  In  many ways the struggle resembles that of the battle to eliminate white privilege.  No one gives up power willingly, and society still tends to favor males overall. It took a while to figure out whether woman's equality was a step up or a step down, since public relations campaigns have continued to confuse the issue for a significant number of women.

The trade-offs were unclear at first since, as an African American woman, I didn't perceive my oppression as coming from the men in my life (who were experiencing the same oppression as I) but from whites -- and largely from white women.  In my youth, black women were employed as unskilled domestic servants in homes of white women who held the power over our economic lives -- and in many cases -- the same white feminists who now needed us to run their homes and care for their children so that they could realize their dreams for careers in corporate boardrooms!  (Since that time they've by-and-large turned to the undocumented for such needs.)  A whole lot of confusion reigned in those early days of the fight for gender equality.

African American women were slow to join the cause of feminism for those reasons, but as educational opportunities became more available; as doors began to open to women of color, it has been easier to join with other women to struggle for equality for all.  Since we've begun to re-define roles, both genders have had to adjust to new expectations of one another and of ourselves.  I think those hopes are slowly being realized, and, despite some casualties, I think we're making progress.  I see it in the attitudes of my sons which falls light years away from those of the last generation.

I sometimes wonder, though, if the real casualties of the gender wars have not been the children?   But that's a discussion for another time.

6.  Which women (living or dead) inspires you the most?  Which man?


Answer:  The answer to this question has changed frequently, and in the early days could  most easily be answered by the movie star whom I adored as a teen -- Kathryn Hepburn, of course.  Then the darling dare-devil of the thirties, the ill-fated Amelia Earhart.  But Eleanor Roosevelt's political and social leadership during WWII stands out as the heroine of most young women I knew.   The spirit each of those mentioned separated them from the rest, but in looking back, each seems almost gender-neutral, don't they?  I've never thought of that before writing those words -- maybe representing the perfect balance between Ying and Yang?  Not sure.

It's also interesting that none is African American, but as a child -- I was "American," and made little distinction between races, except those that were cultural, I suppose.  Those 3 women were universal in their appeal -- enjoying the admiration of most of the young women of my time.

My gutsy irreverent Aunt Vivian Allen Jernigan became my idol at some point - the most honest, compassionate, and generous person in my world as I approached young adulthood.  Currently, Law Professor Lani Guinere and First Lady Michelle Obama would be hands-down my idols and exemplars.  And, still, my ancestor and enduring family matriarch of those who remember, my great-grandmother, Leontine Breaux Allen (1846-1948).  She survived the horrific shame of slavery with grace to produce succeeding generations of extraordinary people who've made impressive contributions to American life in the fields of education, arts and literature, in medicine,  journalism, and the sciences.

The most admired man in my young life was my paternal grandfather, Louis Charbonnet, whose portrait hung in a battered gilded frame on the wall of our dining room.  Though I was only 3 years-old when he died, his aura dominated life in the home of my childhood.  He was an ironworker, millwright, engineer, and community leader, who left now-fading photographs of works in New Orleans that were monuments to his abilities, and to his generosity of spirit that caused the grownups in my life to speak of him in hushed tones.