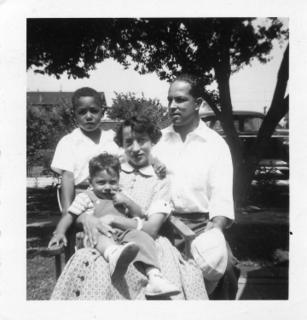 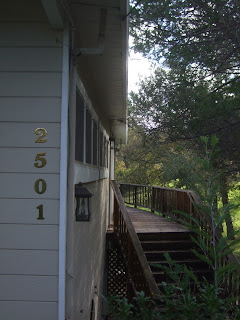 Photo: Rick and Bobby and young parents, Betty and Mel Reid. David was on the way and Dorian wouldn't arrive until years later. We would move into our newly-built home in Walnut Creek in about a year.
Posted by Betty Reid Soskin at 6:14 PM 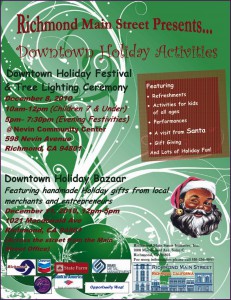 To add to the insanity of the time:

On Thursday evening there appeared on my calendar, "...attend tree-lighting ceremony, sponsored by the Main Street Project in downtown Richmond." Though the day had been long and scattered (had driven a round trip of 37 miles to Pleasant Hill for the Contra Costa County workshop) and then to city hall on the bay shoreline for a meeting with Redevelopment Agency director), I pulled myself together for the five o'clock event. After all, it was on my way home so could be managed easily.

Had to park a block away due to a lack of parking spaces (part of the street was barricaded for the festivities), but the walk was refreshing though with a chill wind that cut through my not-quite-winter-coat. Keep the date in mind. We're talkin' November 20, one week before Thanksgiving!

The community center was filled with school children, Christmas wreathes hung at the entrance, and beside a large Christmas tree sat Santa Claus. He was giving out goodies to each child who was willing to suspend belief enough to participate. There were carolers and liturgical dancers, city officials, and santa-capped volunteers, choirs. Astounding!

To my fevered brain, this was just one more sign that the world has gone mad! I'm beginning to believe that the distortions in the system have so warped reality that we're taking our cues now from some strange sources. Has the beast of commercialism so altered our historical perspective that we're willing to allow even the calendar to be disregarded? Are we allowing the collection of sales taxes (desperately-needed revenue) to extend the buying season by an additional few weeks so that we leap-frog over Thanksgiving? What's next, Hallo-mas?

Were I not such a devout Democrat, I'd swear that the end of Capitalism is now in sight, but then I'd make myself eligible for collection by the Ashcroft Patrol as a possible Communist sympathizer ... or whatever.

I had noticed that the Mall had begun to put up its decorations, but Santa and caroling?

But having said that, I'm off to pick up the beginnings of Thanksgiving dinner fixings, and there's the need to visit the storage center to paw through more of the "stuff" that I've not yet had the time to move into the condo I bought last February. Maybe I'll find the ivory-handled carbon steel carving set that's handled family turkeys for three generations. I know, I gave in and bought one of those efficient Black & Decker electric jobs long ago, but at least I know the old carbon steel set is somewhere in a packing box -- even if outdated and overlooked. I know it's there ... and with it memories of my Dad presiding over the festivities ... It's at such times that I'm painfully aware of the passing of time, and the loss of those who gave life to me. It's when I miss them most.

I wonder if one ever recovers from the feeling of being "orphaned?" I don't recall -- as a younger person -- thinking much about the shoulders I stand upon, or how it would feel when I reached the top of the pyramid? More and more I'm aware of that, and while there is a quality of achievement, there is also that deep sense of responsibility that has increased with age.

Just as I felt the quiet resentment that my parents began to need role reversal while I was still in my own parenting years, I now feel the strong desire to protect my own kids from experiencing that. I surely was not aware of those feelings at the time, eventually it all fell into the natural rhythm of life, and I took my place as parent to my parents fairly comfortably. There were 20 years of double-parenting, but given my own good health and continuing productivity, none of it was lost.

Life just isn't neatly scripted. I doubt if any of us ever feels totally "grown-up." There are probably small pieces of the child that continues -- more in some than in others. The artist part of me seems to be where she resides, but there is a very capable and responsible adult Betty who carries that part of my life that keeps me stable and adaptable. I think, sometimes, that the artist Betty has served to keep me in touch with the parts of Dorian that will remain an unfulfilled child for all of her life. Without access to that part of myself I probably would have become bitter and burned out long ago, but instead she's kept a critical part of my psyche active that may have otherwise atrophied by now.

But I have some menu planning to do and I'm assuming that there are some online pages to help me work out some novel ways to approach the day ... .
Posted by Betty Reid Soskin at 12:38 PM