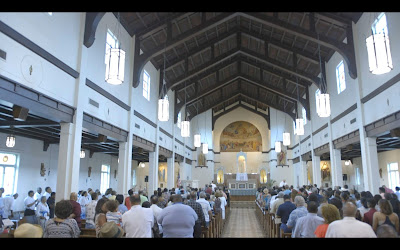 I was aware that the reunion planners had included a gathering for Sunday Mass at Corpus Christ ...

I don't remember being particularly concerned, nor aware of any long-held trauma around the issue.  Those feelings had faded over time, and by 2018 it would be simply one item on the itinerary of a memorable weekend, and nothing more.

David and his two daughters, Alyana and Tamaya, and I, walked up the aisle to be seated by the usher in the third row from the altar.  I did notice that the pews were not as I'd remembered them (it's been a long time since I was last in this hallowed space as a teenager).  There had been no middle aisle, but a large middle section with aisles on either side, and side sections where people of colored were seated.  But, of course, over time those pews surely had been replaced, and the sanctuary reconfigured.

I sat, grateful to be in the home of my family, in the church of our ancestors, and surrounded by all that colorful Charbonnet history ... .

No matter how far life had taken us all, the Tremé was and would always be home.

While musing, I was startled by a tap on my right shoulder and looked around to see Wendy, a cousin I'd only become aware of over the past few days, but suddenly here she was, whispering in my ear, "You're to participate in the Offertory, Betty.

So much had changed since I was that teenager, and I'd left Catholicism so long ago that I  had no idea what the "Offertory," was.  Obviously, it had to be a part of the worship service, and was probably connected to the passing of the collection baskets in some ceremonial way.  So much had changed since I was that naive child -- applause at the end of the priest's sermon would have been unheard of.  The mass would certainly have been delivered in Latin, and with a far more mysterious affect.  Missing was the wafting from the gleaming brass canister with the attached chain -- the incense which gave the entire service an unworldly and exotic feeling.  There would have been much more kneeling as I remembered, and the priest would be offering the mass to the Lord Jesus, and -- with his back to the congregation -- simply letting us observe that process.  Always making our case before God, speaking in our names as an intercessor. This mass was unfamiliar and a great deal less formal.

The image of my father suddenly rose to consciousness -- as one of the men who passed those long-handled baskets during the mass, and that it was he who -- as the president of the St. Vincent de Paul Society (men's group) at St. Benedict's in Oakland -- who was in charge of counting and reporting the amount of the collection to the priest at the end of the worship service.

Of course, there was no time to explain that I was no longer a Catholic, and why, so there was nothing to do but wait until summoned at that point in the ceremony.  Awkward.  But those facts paled in the face of the fact of "family," and of that honored role to fulfill.  This was all that mattered, so all else dropped away as I waited to be "called to service."

It was only a few moments before I was led from the pew near the front of the church, through the side aisle sections, to meet the few stalwarts who would form the small but important procession.

Behind a white robed altar person carrying a tall metal pole upon which was impaled --  the image of Jesus Christ on the Cross, and side-by-side with another elder, cousin Phyllis, carrying a flacon that held the wine to be used in the communion service, and I carrying "The Host," an ornamental small round box filled with communion wafers; the "body and blood" of Christ.  And suddenly, the sanctuary was filled with the heavenly music of the choir and there we were, there I was, marching up the center aisle toward the priest who stood waiting at the Altar.  I am bearing the most precious element of all.

And all in, Corpus Christi, my grandfather's church! 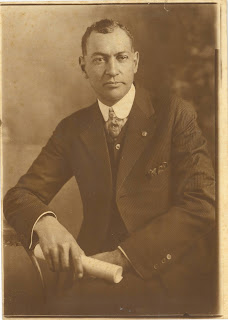 Not even the outrageous awfulness emanating from Washington could cut through the magic of that moment.  The centuries-old injustices and inequalities, the harsh realities that had destroyed my belief system completely since that fifteen year-old girl child had last visited that hallowed space.  Nothing could have diminished this moment in this year 2018.

The film that is being made about my life; the two filmmakers who'd come along to capture these moments of my most improbable life -- had no idea of the depths of this experience.  How on earth would they know what it meant?  Who on earth would believe this if written in a script?  I silently vowed to gain the footage and include it here, in this record of my remarkable life that seems almost too theatrical to ever be believed.

Was it enough to bring down the Gods from Heaven to reclaim this errant child?  No.  No blinding insight.  No contemporary version of the burning bush, thank you.  But there was a kind of peace that descended.  I knew instinctively that this may have been the greatest "book end" moment I would ever live, and that it was almost poetic in its simplicity.

But maybe among those inexplicable moments that are beyond explanation and defy logic, they knew and had guided me toward my completion -- in this my final decade.

Posted by Betty Reid Soskin at 8:23 PM No comments: