After a few hours of living with that last entry about Michael Jackson ... .

as a way of doing penance I forced myself to sit before my television set -- tuned to MTV -- and watched a full hour of his videos. I then watched "Living With Michael Jackson" (BBC). What a sad experience! This was an artist of and for my children's generation. I felt shame for sitting in judgment of this vulnerable artist, though I was left even more conflicted than before.

His talent and charisma cannot be overstated. I could feel the years peel back as I watched his magic unfold. Incredible!

Among the selections presented was one with Lisa Marie Presley called, "You are not alone," and there it was; the exhibitionism of the baring of his body just as I remembered. The discomfort that I'd felt returned as sharply as before. Wanting to look away ... embarrassed for him in some weird way. I was struck with how long those impressions and images remain in the subconscious to be called up with all of the affect originally experienced. How many years ago was, that, anyway?

What an amazing performer was this fragile genius!

He is called the ultimate showman. Transcendent! Legendary. And now, I, too, am a believer.

... but I came away also convinced that he may have been as damaged by his early life experiences as was my Dorian by irreversible birth trauma. Emotionally, he may not have matured much more than she has over the years. Watching him being interviewed evoked empathy usually reserved for the "wounded" who make up her world. I could feel myself mentally lowering expectations and making the necessary allowances ... (this is familiar territory).

Perhaps he was precisely what he needed to be in order to survive his extraordinary fame.

I couldn't help but suspect that -- had Dorian approached with the opening statement, "...tomorrow is my cat's birthday," Michael without hesitation would have asked -- "... and how old will she be?" 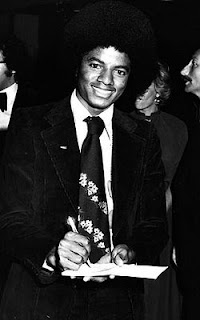 Been wondering whether to speak of the sudden tragic death of Michael Jackson, and trying to tell myself that -- in a time of so many celebrities passing -- there was really little need to deal with this particular one. But the news has been impossible to avoid. Looking away did little to eliminate the persistent drumbeat of Billie Jean and the brilliance of this flawed young idol. To watch him dance - ghostlike -- hour after hour in the news coverage was like watching poetry personified moving gracefully across the screen. It was impossible to look away ... .

His troubled life was something I didn't really want to think about. It stirred so many painful memories of others I've known about whom there were similar disturbing whispered stories of sexual misconduct. Just another human story among many?

I thought of other larger than life figures from the world of entertainment and the excesses that marked their lives and contributed to their self-destructive choices. Was this one really any different? I don't really know, except that his stature in the world carried with it all of the weight that comes with public scrutiny and notoriety that the lesser known might escape.

Found in myself a mother's tendency to want to forgive and protect, but a large part of me could not exalt. Found myself turning away from the apologists and their pleas that all be forgiven; that we understand the damage done to the child Michael whose loss of his own childhood had formed this flawed adult we all adored and loathed in turn over the years.

His flaws will be examined and dissected into the future; and rightly so. His imperfections will be studied and reviled as his genius is celebrated. Maybe this is as it should be. Maybe this will be his legacy; the much-needed corrections to the laws and regulations that govern the lives and careers of children exploited by those upon whom their lives depend. But then I thought we'd taken care of that with the long ago Jackie Coogan laws and those which developed around child star, McCauley Culkin's, court battles. Maybe not. There is urgent need to correct the system that allows for the abuse of prescription drugs for those with the money to afford them and to limit access from those who are the enablers for a price.

I find it hard to believe that Michael's skin lightening was due to a disease. Given the rest of the dramatic physical transformation that we've watched over the years, it seems far more likely that he'd undergone chemical treatments that whitened his skin -- and may well have shortened his life. We didn't experience the changing along with him -- only the change. And once that change was complete, in his stage appearances we began to see a flaunting of that new white skin with a dramatic baring of his half-naked body on stage and on camera. I remember how uncomfortable it felt to watch those exposures, as if this young man's struggle with the racism we knew so well was being dealt with in a way that we sensed as wrong and feared would lead to more tragedy. It was clear that we were witnessing a psychiatric nightmare! The songs he composed over that period are so contradictory; so in denial, so riddled with conflict, that I wondered why so little was being made of it by the critics and reviewers? He was consumed by "black and white," thematically. 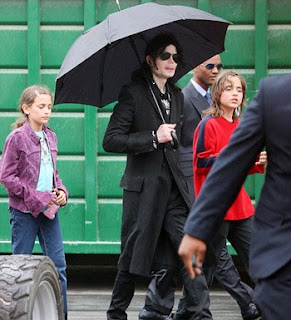 The clue for me was in the fact that from the time of his complete skin transformation we never again saw him out of doors without a hat, long sleeves, and sheltered by a large umbrella, rain or shine. "Avoid exposure to direct sunlight with this medication," screamed loud and clear.

The conclusive evidence for me that this gifted young man was an emotional train wreck came with the fact that -- at the point where he elected to become a parent -- it was not brown children that he chose to "father," but children who could hardly have been born to handsome dark-skinned Michael Jackson -- but children who instead reflected the distorted artificially white-skinned-straight-haired-wigged-self-created man that he'd unnaturally become with the help of unscrupulous plastic surgeons of no conscience. That makes those lovely children little more than extensions of the Michael Jackson fantasy along with Neverland and its Merry-go-rounds and Ferris Wheels.

Oh how I feel for those 3 beautiful and confused children he left behind! That they will be loved is a given. There are enough responsible grownup Jacksons to see to that. However, what in the world can ever make up for their distorted life experiences to date?

Make me no speeches about what a loving father was this tortured man. Watching the kind of strange lives that were imposed on these innocent kids was almost as sad as the spectacle Michael's own life has always been. Were it not for his genius and great wealth, he might well have been charged with child abuse in time, though his power and wealth had long ago cast him far beyond the reach of accountability.

There are lots of questions still to be asked, and they're not all about the mysterious circumstances surrounding his death. They have nothing to do with his obvious gifts to black culture and to the entertainment world that will surely not see his equal for a very long time. Those facts are indisputable.

That there has been a persistent feeling of sadness marking these past few days surely is caused by the loss of this sensitive, flawed, and sad young Michael Jackson. But the cruel images we've been fed by CNN suggests that this was a deeply-troubled life on a downward spiral that might not have survived the upcoming 50 concert schedule anyway.

For the sake of the young and the vulnerable among us, I'm hoping that we're taking the right lessons from his undeniably productive life as a performer. I seriously wonder whether he ever knew how loved he was?

It seems probable that -- despite the international acclaim that deservedly came with his remarkable career on the world stage -- the gentle Michael seems never to have been convinced that he'd overcome what he must have perceived as the stigma of being the socially-despised black "man in the mirror," the dark specter who must have haunted him since childhood in Gary, Indiana.
Posted by Betty Reid Soskin at 11:17 AM No comments: