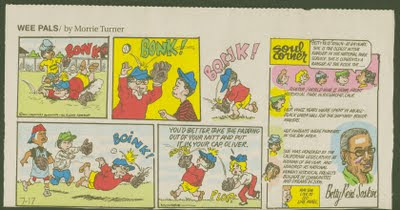 One would think it impossible to forget the upcoming publishing of my debut in a Sunday comic strip, right?

... yet, that's precisely what happened.  The West County Times columnist, Chris Treadway, ran a complete recap of "Life with Betty" over the past unbelievable months of honors.  (Has it really been 8 weeks since the Morrie Turner tour?) It reads like a fairy tale for seniors!    The whole story appears in Facebook, and came up on the newspaper's online edition when I clicked the mouse.  Now I need to put on my shoes, turn down the oven temperature on the pork chops, and hit the newsstand for copies for my grandkids.

Had "Life with Dorian" not taken priority over "Life with Betty," this would never have happened, but there isn't always room for both.

... and maybe that's at least a part of the problem.

I'll have to thank Morrie Turner tomorrow; maybe send him a DVD of my songs ... and add him to the list of new friends acquired over this past year.  Then I'll send a copy to our cultural resources staff for adding to a growing collection of "All Things Betty."

Whoever would have ever guessed?

(Someone needs to do a study of time as it manifests after one reaches the age of eighty.  It's in the 8th decade that Christmas begins to recur every 6 weeks.)
Posted by Betty Reid Soskin at 3:38 PM No comments: Links to this post

The level of intensity shown by that last entry is unsustainable ... .

Soon after re-reading Friday's writings (and feeling the catharsis which was almost an electrical impulse), I shut down the computer and eased all the synapses back into place and got ready to pick Dorrie up for our usual Saturday shopping trip.

Of course, with my new-found sensitivity to be alert for signs of residual trauma, I searched her face as she neared my car, but all I saw was a beaming smile as she busied herself with packing her walker into the backseat and depositing the cloth bag of whatever that accompanies her everywhere.

We first went to her bank where I parked outside to wait as she went in to make a small deposit to insure that she wouldn't be overdrawn (she'd received a warning in the mail).  And, yes, her mother provided the "small deposit" to avoid the $35/penalty that would result if ignored.

We spent the next few hours in the supermarket as I noted how expertly she managed to make her way around the aisles to gather up the items from our list -- and though totally illiterate -- she has apparently memorized shapes, colors, and sizes of letters of her favorite brands, and though we were in a store we don't visit very often, the locations of products posed no problems for her.  She apparently had through osmosis learned the categories of items that are displayed together.

Last night we drove down the hill to the community college where a musical, "Rivets," was being staged.  It's based on the WWII Rosie the Riveter stories, and I'd promised to deliver 250 brochures from the park for distribution with the programs.

Dorian sat as if enchanted for two hours; and followed the proceedings on stage well enough to ask at one point whether I had been a "belder,"  (welder).  She has a way of coming up with newly discovered words, but seems to have figured out the function associated with it, and only needs confirmation from me.  Her vocabulary is sometimes more extensive than that of some of her caretakers.  Dorian also has a flair for making up or adapting new words, and often they're an improvement over the original.  For instance, her "disastrophe" is a case in point, and she uses it appropriately to describe awfulness that can't be described in any other way.

As we were preparing for bed on return from the college, as I was feeling for quarters left in the pocket of the trousers I'd worn to San Francisco on Thursday, my hand fell upon the 3 little cassette tapes that had been used by Dr. Smith during Dorrie's interviews.  Our attorney had requested that I take a tape recorder to both examinations, but, being of another era, the one I took required tapes -- I didn't realize that there are now digital recorders.  The first day with Dr. Becker, mine had stalled and resisted all attempts to make it work.  He assured me that he would be recording everything anyway, and that he would send our attorney a WAV file of every word, electronically.  I saw no reason not to trust him.  My intuition has rarely failed me, and I had no reason to expect it to now.

However, during the 7-hour psychological examination the following day, my little hand-held model seemed to be working well, so Dr. Smith positioned it to catch every word, but had to interrupt his work each time to call me from the reception room to reset it as it clicked off, and after a couple of times it seemed wiser to not use it at all, but to trust that he would follow Dr. Becker's procedure. The two men share a suite of offices.  He assured me that he would be sending his tapes along as well.

That meant that my hand had fallen upon the little tapes that held the partial recordings of Dorian's interviews.  Oddly enough, I felt no wish to listen to them.  What could I possibly learn that was not already known?  She is, after all, a fully-mature adult woman (okay, so maybe not), but nonetheless - certainly with a right to confidentiality.  Maybe even this late in life, there is need to reinforce the concept.  She has no way to listen to them, I suppose, but she surely might like to know that no one else will.  I gave them to her zipped into a small plastic bag this morning.  Her attorney will understand.

If I'm lucky, I may be given a copy of their findings, and that might be helpful to getting us back on track to whatever level of independence may be needed in our somewhat limited future.

It's after noontime, and she's still asleep on the futon next to my bed ... that nagging suspicion returns that this is a symptom of residual trauma (clinical depression?), but all-in-all, I just may not ever see the forest for the trees.  She will sometimes remain in deep sleep until 3 o'clock, then drop off at 8:30 or 9:00 and still sleep through the night.  Still, on Monday, Wednesday, and Friday, alone in her apartment without an alarm clock -- she wakes and gets herself ready for the Para-transit bus to take her to NIAD for her arts program.  Not sure how to read this.  It's new.  Though I've tended to see it as extraordinary fatigue due to the stress placed on her body due to reduced mobility.  I've tended to allow the new behavior, in the belief that this, too, will pass as her healing progresses ... .
Posted by Betty Reid Soskin at 11:28 AM No comments: Links to this post