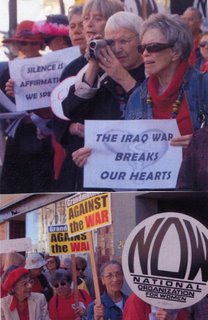 Grandmothers Against the War ... Keith Olbermann wudda loved it!

Received an alert from the network of old feminist pacifist activist friends with whom I've marched and sang and protested since the Sixties. We were young then, but no more. We were dedicated and idealistic and exuberant in the traditions being newly forged in this part of the country and the world. There was such a dead earnestness about those days with tears shed and speeches screamed at those who would bring the horrors of our time upon ourselves and our young.

Yesterday I felt something new. We've mellowed! The call that came (no longer from the Quakers or the Women For Peace but from MoveOn and CodePink, etc.) but it rang with the same urgency and achieved the same response. Roughly 350 of us -- now grey-haired and softer of body and quieter of soul -- turned up at the Oakland Armed Forces Recruitment Center at 21st and Broadway to enlist!

This time we laughed! Oh how we laughed! Inside these old lady bodies lived, still, the young rebels against the rulers as before. And, there scattered among the grandmothers were a fair number of "Grandfathers Supporting Grandmothers Against War!"

Those young uniformed armed forces recruiters behind the bolted doors (yes!), must have wondered, "what in the world...?" That was inside. Out on the streets (where the Oakland police had closed off a two block area as the crowd spilled out over the sidewalks the comments were hilarious!" Signs were poignant; "Take us instead, we've already lived our lives." And, some carried signs with photographs of grandsons and daughters now fighting in Iraq or stationed in Afghanistan.

My favorite comments, "We'd be cheap to deploy -- you wouldn't have to supply us any body armor -- we've got 'em built in -- just some sturdy aluminum walkers, some crutches, a few motorized wheelchairs and a generous supply of Depends and we're good to go!" And another woman added, and you wouldn't even have to ship some of us home! Gallows humor? Most decidedly.

There was a woman with a hand drum, a guitar or two, the old songsheets, and all of the old songs we've been singing now for at least 30 years. "We shall not moved," and "Blowing in the Wind," and "Joe Hill," plus some lovely rounds I'd not heard before but reflect the more recent generation of women ... nice ... .

As I walked back to the parking lot to return to my desk in Richmond, the grin of freshened memories persisted. How on earth could I have felt such joy at an occasion such as this? I'd spent over an hour renewing friendships -- spending that extra several seconds as my eyes were able to slowly get behind the wrinkles and white hair and see those wonderful women whom I now barely remember that I've missed.

I drove away letting the tears fall where they may without notice. Maybe we did have an effect on the wars of our times, maybe. Maybe not. Vietnam took so much from us all - even those who survived it. And there is irony in the fact that I work every day in the shadow of the Kaiser Shipyards where we once built ships faster than the enemy could sink them, and won the war of my youth in the process. The irony is that on that very site -- in that very shipyard -- present day use is the storage of new autos shipped in for USA consumers, made in Japan, the nation of the enemy that we fought to its knees!

Then I remembered the joy of today and Barbara and Dion and Elizabeth and Judith and Becky and Wendy and all of the others who came together one more time before sunset to say "No" to the sending of our grandchildren to far away lands to kill the grandchildren of other women whose lives will be diminished by the arrogance of power gone mad.

Our symbolic attempt to enlist in the armed forces to take the places of those whose lives are just beginning made a statement. And ultimately, I'm sure that each of us knew that we'd have little effect upon the warmongers, but that -- one more time -- we'd done what we had to do for ourselves and for the sake of our own sanity.

There was also comfort in knowing that in 16 other cities in faraway places other women of our time had joined with us in simultanous solidarity.

Sisters all!
Posted by Betty Reid Soskin at 2:16 PM No comments:

Long ago when Rick was at his hardest places -- alcoholism counselors would insist that I needed to allow him to "bottom out" in order to begin to find his way to sobriety. It was a cliché that we both knew well. I visualized it as a place where he was underwater drowning but needing to touch the pool floor in order to kick himself back to the surface. It was more poetic than real, I think. It never worked because love always managed to get in the way, paradoxically.

This past week or so I found myself with the opposite dilemma -- working so hard to bring off my latest project -- the second Leadership Tour of the park. The first had been phenomenally successful with so much positive buzz that virtually no recruiting had been necessary for this one. People had been calling in asking to be included since the day after.

On Thursday, February 10th, we gathered in the Shimada Room at City Hall for coffee at 8:30, boarded our tour bus at 9:10 for the Rosie The Riveter Memorial at the shoreline, enjoyed a guided tour past World War II structures (Newell Supermarket, the Old Greyhound Bus Station, the Japanese Oishi-Sakai Nurseries (41 handmade greenhouses that survived the years), the Park Florist that supplied the flowers for launchings at the shipyards, the Winters Building that served as an air raid shelter, Atchison Village war housing, the Red Oak Victory Ship and Whirley Crane at Shipyard #3, ending at the magnificant Ford Assembly Plant where the park's reception center will eventually be housed. We gathered for lunch and a de-briefing at the Harbormaster's Offices on the Marina shortly after noon. It was a great event.

That day I'd received a large package from the National Women's History Project containing the large posters and NWHP catalogs. I felt momentary excitement but instantly knew that I needed to stash them away for later. Among our tour passengers was the director of the National Parks Foundation who had flown out from Washington, D.C. He was obviously impressed by the work Naomi and I had done in breathing life into the concept of Civic Engagement.

It was then that I found "The Top." I was experiencing something previously unknown for me. It felt as though my persona was beginning to overwhelm my work. It was getting in the way. The tour I'd worked so doggedly to bring off successfully needed to move to the forefront. This day couldn't be about me.

I'd touched the sky and now was the time to come down.

After the tour ended and the guests (all 28) had scattered back into their lives, I quietly placed the beautiful poster on (Superintendent) Martha's desk - stashed the catalogs in the trunk of my car -- and went home for the day. It felt right.

On March 19th I'll bring out my paper hat again and celebrate.

Everyone should touch the sky, at least once, but that isn't a place that sustains life for long, I think.


Note: Our tours began with a viewing of "Of Lost Conversations ... and Untold stories," the DVD that is now available if you'll click on Cbreaux Annex (the link in the left hand column.) Do leave a comment. Would love to know if the information is new to you. It's all been carefully documented. I don't think Ken Burns needs to worry, though. We're no competition, yet ... .
Posted by Betty Reid Soskin at 8:23 PM No comments: