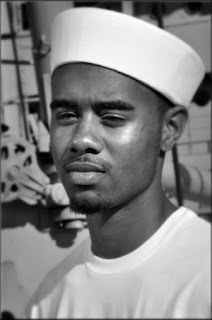 Disappointment doesn't go down too easily when things have been going so well for so long ... .

I don't normally work on Sundays, but feeling that the Port Chicago video shouldn't be out in the world without the young men being aware of its release, I planned to be the presenter in our little theater for this important screening.  Having been with them on the SS Red Oak Victory two years ago when the filming was being done, it only seemed logical.

One week ago (two days after receiving the first copies), I searched our records for their contact information, and -- being successful -- tried to reach each by phone.  I did make contact with Peter Gray and told him that there would be a showing on the next Sunday at two o'clock -- then I tried to connect with the other four but found myself leaving messages on voice mail.  One week ago I wrote out invitations to each inviting them to the premiere showing, and extending the invitation to their friends and families.

Eight days later, on Sunday, I went to the Visitors Education Center to wait.  Having no response to either my voice messages or to the invitation, I was edgy and anxious.  As the hour approached and it was obvious that no one was going to attend, my disappointment became obvious. I did the presentation for the visitors who happened to choose that moment to drop in, but ...

For whatever reason, two o'clock came and went without a sign of the five young brothers.  Since they're from the troubled Iron Triangle district, I have no idea whether the reason was due to the opening of the Olympic Games, or, if there was a political reason for the no show,  or .....  ?

There is growing discontentment throughout the city stemming from the fact that we're in an election cycle which always provides fertile ground for exploitation.  I'm concerned that the racial barrier is being resurrected for political gain, and that differences are being fueled by politicians who might benefit by appealing to those caught in the web of persistent need and denied opportunities.  There are still inequities and injustices to be addressed, and -- we may be paying the price for that.