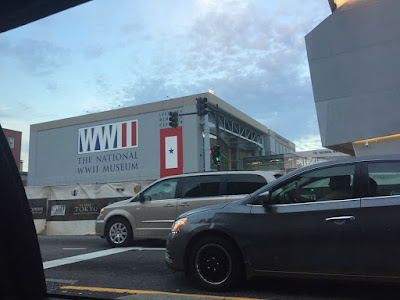 Bob and I arrived in early evening at our hotel, the Loew's, on Poydras near Canal Street and about ten blocks from the National WWII Museum where we were to have a family gathering the next day.

Found we were to be guests on the 21st (top) floor of our hotel, where our hotel bathroom may well have been equal in size to my condo's second bedroom (where I've located my desk, computer, and all of the overflow of life with a month's worth of accumulated junk mail that I never have the time to go through -- and which is beginning to threaten my ability to reach the closet where an accumulation of all that stuff I need to go through one more time before calling Good Will ... you know how that goes, right?

At any rate, promptly at 5 our limo arrived to deliver us to a family gathering arranged for by cousin Paul Charbonnet and Ellen Buckley of the WWII Museum staff.  They'd put out finger foods and wine and soft drinks in a room reserved just for our family.

Among the guests were cousins we'd never met from both sides of the Charbonnet clan, both white and black, plus (surprise!) Times Picayune journalist John Pope who'd written the feature article announcing our visit to New Orleans, and about the award I was being presented with at the Gala.  He blended in with the rest of family, and seemed to thoroughly enjoy the party, staying through to the end.

The Museum photographer was there to cover the event, but I've not yet received his photos but will post them when possible.  Our film team also was at work, too, and there should be some good footage to be shared. 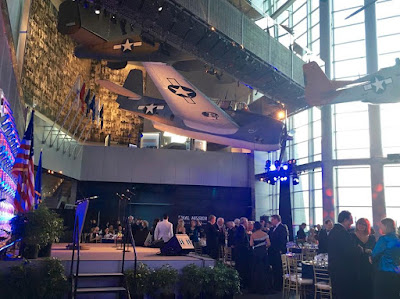 There was Pierre Charbonnet (from our side), a former police officer now retired, and two of his sisters, one being Municipal Judge Desireé M. Charbonnet, a lovely woman with whom I immediately felt kinship.

But it was (white) cousin and dear friend Paul Charbonnet who was the hit of the evening, and who established an instant connection with younger Pierre (from our side), and they will probably continue in relationship into the future.  Pierre learned (from Paul) the secret that his father and grandfather would never reveal to the family -- the identity and origin of the family -- a white man.  It was at this informal gathering that Pierre would learn from Paul that our ancestor in common, Amable Charbonnet, was their ancestor in common, and that we would visit that grave, together, the very next day.  You can imagine the emotions alive in that room ... .  You could almost hear and feel the chains dropping away and new connections based upon family ties being forged.

The reuniting after generations of separation was not by any means universal.  There are holdouts on both sides, I'm sure.  Some expression of the reluctance was expressed, but without overt animus, at least not where I could hear or feel it.  I'm sure that Paul experienced some resentment on the part of members of his family, but his sister, Helen, appeared at the next morning's visit to the cemetery.  She was gracious, and welcoming and seemed thoroughly at ease.

The walls of centuries of separation finally begin to fall as the descendants of those two Charbonnet brothers from Thiers, France, Jean Baptiste  (Paul's line) and Antoine Charbonnet, (our's) come together in harmony.  It is from Amable, a grandson of Antoine's that our line was formed.  The two brothers arrived in the Americas before the Revolutionary War of 1776, and the Louisiana Purchase of 1806.  Our ancestors helped to found this city that was already established in the time of the Haitian Rebellion and the War of 1812, and before the United States was a country.  Our ancestor, Antoine, went on to settle in Haiti while Jean remained in Natchitoces, Louisiana.


The story is totally fascinating, and should become a book at some point, maybe authored by Isabel Allende.  Wish there were enough days left on my Calendar of Life to do it myself, but, alas, time is running out ... .

My brain can hardly take in the implications of what we were experiencing in those moments ...  but this day would pale when compared to June 10th -- the unforgettable day to come!


Posted by Betty Reid Soskin at 2:57 PM No comments: