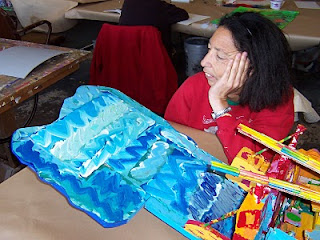 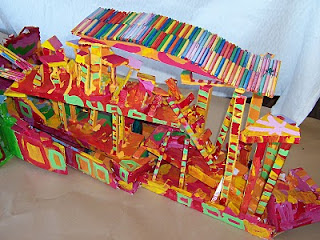 Photo:  This is Dorian's sculpture of  "Tsunami," which was created at the time of the Asian tragedy.  We're living our version of an emotional tsunami right now, so this seemed an appropriate choice.  This is all one piece but was impossible to photograph without using two shots in order to retain the detail.  Note that she included a way for people to escape the oncoming deluge.  Maybe we'll be so lucky!
Posted by Betty Reid Soskin at 8:37 PM No comments: 
and it surely isn't because life has slowed down a whit.  I've just been too busy livin' it.  Little time to write about it.


I've guided tours -- strangely enough, my last tour consisted largely of other rangers though not in uniform.  Not sure what that was about, but it may have had to do with the fact that ROHO (Regional Oral History Office -- of the Bancroft Library at UC Berkeley) --  was filming this tour and there was the need to show the seats on the bus filled with "tourists".  Not sure; but it was novel for me.  In a way it felt as if I might be being evaluated, but it didn't feel the least bit negative.  As always, I improvised my way through the 2 and-a-half hour tour and even found some newness in my interpretation.  Maybe that was because I was aware that many of them had heard my stories before and that I needed to dig deeper for some freshness.  And, as always, I stopped before I ran out of truth. 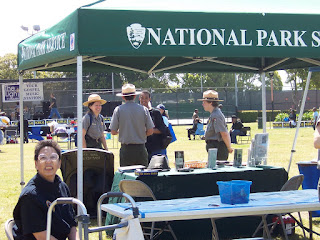 And -- an exciting thing has happened in that the Generations Project of Brigham Young University Media has invited me to be a subject for their nationally-viewed show (cable channels).   It means "maybe 2 and-a-half weeks of filming," and (the most exciting part of all -- an invitation to allow their genealogists to explore my family history with me -- around a question of import to the narrative.


If you've used the links under my photo and have seen the work already completed on both my maternal and paternal lines, you may have noticed that -- prior to the Civil War -- there is much that is missing, except for the history of the white ancestors whose lines are traceable.  It is the difficulty of piercing the Slave Curtain that is so frustrating.  How I would love to know where my black ancestors originated; even to the region, if not the actual family lineage!


I'd give almost anything to learn about the origin of the free woman of color "of high birth" (according to cousin Paul Charbonnet) who became the consort of the Charbonnet man with whom she bore 9 children, one being my gggrandfather, Dorson Charbonnet, for whom my dad was named.  And how about my mother's grandfather,  Corporal George Allen, about whom we've learned so little; except that he was a Louisianian who fought with the Colored Troops on the side of the North in the Civil War.  There is so much left unlearned and untold.


It would be so wonderful if, through me, those doors on the past can be unlocked so that the current and next generations of family historians will have access to the material that will complete the narrative.  What a gift that would be to many yet unborn.


Needless to say, I will take the time off my work to make this adventure possible.  I'm guessing that this segment will go into production soon.  This is far too important to ignore, and I do have lots of vacation time available to draw upon. 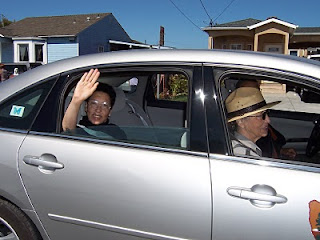 Not sure how this will be managed with Dorian now living with me, but we do have 24 hours-a-week of personal aide services granted by the Regional Center of the East Bay, and there are family members to enlist into service, so I'm going to proceed as if -- whatever problems there are -- will be worked out to make this once-in-a-lifetime experience possible.


Will keep y'all posted.  (By the way, have I told you that the plural of y'all is alla y'all?)


Photos:  Dorian and I rode in the Juneteenth Day Parade in celebration of the day that word of the Emancipation Proclamation issued by President Lincoln reached Texas -- months after freedom came to the rest of the Old South. The National Park Service maintains a presence at all of the city's parades and festivals; a role I thoroughly enjoy.

Posted by Betty Reid Soskin at 11:36 AM No comments: