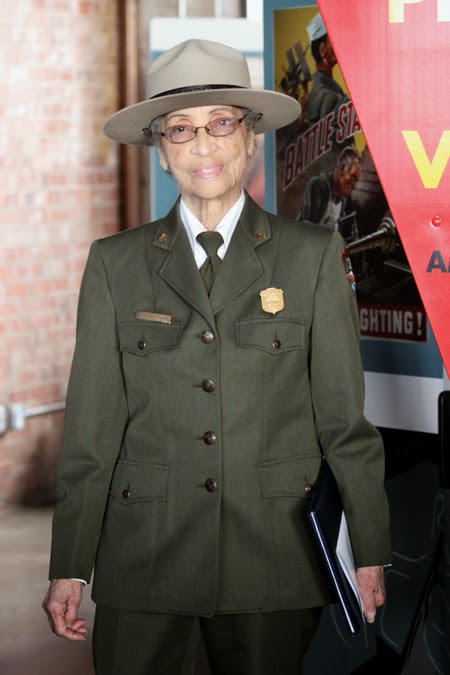 The Department of Interior's piece was released to social media, and in one fell swoop I'm big news across the whole country!  Can you imagine?

When released it was re-Tweeted by the White House (have no idea what that means), but my imagination is running wild -- and I imagine the Obamas reading about this lil' ole lady ranger on the West Coast (crazy!), and wondering if the National Park Service has lost its collective mind!  A somewhat overripe but still-functioning park ranger let loose in the system -- and at a time when any other elder with an ounce of common sense is retiring into RV travel and registering for burial insurance!

I'm more and more convinced that -- at a time when contemporary culture would have us producing more and more Botox commercials and anti-wrinkle solutions; when public television is running fundraisers on "Aging in Reverse.  When we're being treated to a full season of television based on thugs and low lifers at all levels and in all ethnicities and races; with real life crime shows almost impossible to avoid; with frequent Amber Alerts and car chases feeding our need to be charged up, emotionally.  With racism and brutality on the rise and government response inadequate to the new challenges due to partisanship and short-sightedness, especially on environmental issues that grow more terrifying with each day, maybe we're searching for relief in new lifestyle possibilities.

Maybe we're just starved for relief from all of it and, as it was during the government shutdown, the sight of a real grown-up on the media (me!) serves to provide a false sense of security.

Maybe natural grey hair and well-earned wrinkles appear less to be feared.  Maybe someone who appears to have found a way to get through life without succumbing to all that can offer an alternative to the adulation of youth model.

I've not reached this place unscathed; this journal reveals some of that, but overall I seem to have come to terms with Life, at least if one doesn't look too closely... .

There is so little in all this that seems personal to me.

I don't think that I'm being overly modest.  I know that I've done and am doing good work, and am grateful that this is being recognized, but it feels excessive at times, and it's difficult to be the hottest thing in the supermarket checkout line when you're wearing mismatched socks and no makeup -- a perfect right of any lil' ole lady whose supply of shredded wheat and prune juice is running low ... .

Besides all that the plain truth is that the secret of my success may be that I discovered by sheer accident -- if I do it just right -- putting my ranger hat on, that is.  I raise my brows as if caught by surprise -- and start by setting the front edge of the brim in place on my forehead -- then while applying gentle pressure as I set my hat in place the effect is that it gives me a $1200 nonsurgical brow lift!   Problem is that everything falls when I remove my hat ...


Posted by Betty Reid Soskin at 5:34 PM No comments: