Guided another bus tour today, of the scattered sites that form Rosie the Riveter/WWII Home 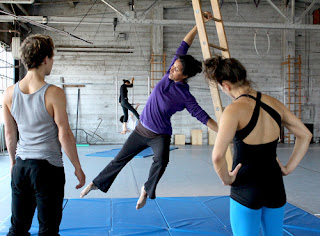 ... and found that I've now grown so accustomed to sharing those personal stories with the public that -- even the presence of a camera person on board and being wired up for sound no longer phases me in the least.  Not sure that's good.  It's also true that his presence and all the trappings disappear into the environment before we've boarded the bus, something I never thought would happen, but it has.  But it's also true that I've eliminated cable from my life (and budget) after running across my image on the screen more often than is comfortable.  Seeing myself on camera is not something that I particularly enjoy, so radio is now my favorite mode of entertainment.

Fortunately, the cameraman is a personal friend by now -- having worked with me often over the past year.  He's also a history buff, and is as interested in the content of the tours as I am, so his presence is reassuring, if anything.

The intention is to gather enough of my presentations on video- and audio-tape so that the material can become a part of Pod Casts and edited into usable pieces for a variety of projects when I'm no longer with the NPS (awful thought!).

But the temporary fall into depression over recent national events is giving way (as is always the case) to new adventures: 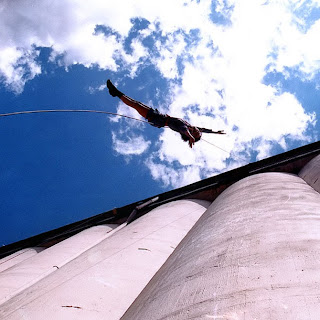 If you'll look over to the left side of the screen at the bottom item under Links, you see a line for Zaccho Dance Theater.  This is the dance company founded by dancer/choreographer/aerialist Joanna Haigood.  Joanna is a dear friend and one of my heroes.  If you'll follow the link to Joanna's website, you will understand just why that is.  I've so admired her work over the years. She has worked internationally, and splits her time between the coasts, part of the time in New York, and the rest in her local studio at Hunters Point in San Francisco.

On a visit to Facebook earlier in the week I discovered that Joanna and Zaccho has won yet another distinguished award for her work on the East Coast.  I responded to the announcement with a brief statement that congratulated her on this new award and a statement expressing my wish to "be" her just long enough to fly!

A member of her company read my short post and apparently mentioned it to Joanna.  Then it came, "I think we can do it, Betty!"  and, "I will work up something for the two of us to do together" says Joanna -- and at some point when there's enough of an opening in her schedule -- I will be rigged up for flight!  I cannot wait!

Suffering from a lifelong fear of heights, this challenge is enormous -- but also freeing.  I can hardly believe that this is happening, but it is. 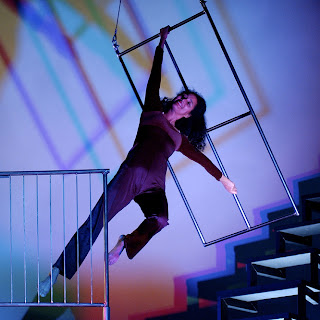 Immediately went to the nearest 24 Hour Fitness Center to sign up for training.  Filled out the forms and got myself a personal trainer.  I'm committed to 1 hour a day 5 days a week until further notice.  I think the gym staff must have had a wild time figuring out just who would be assigned a 91 year-old wannabe gymnast fossil!  But I'm still a fit and trim 118 pound woman with a dream to fulfill, and -- the only disadvantage I see that might get in the way is questionable balance that seems to have loomed up over the past year or so.  Standing on one foot with my eyes closed is enough to turn the world upside down.  The master trainer says we can get that under control by a regimen of strengthening exercises.

I went in for my first interview with the trainer this afternoon, and after about 30 minutes left him standing there with a look of sheer disbelief on his face; maybe it was wonder.  ("Have I just enrolled a 91 going-on-92-year old woman?")

We've got a plan, and I went to Mountain Hardwear where they carry active sportswear and found that I look absolutely not a day older than 75 in my black tights and top with the built-in sports bra!

Joanna trained with the Flying Wallendas of Ringling Brothers Barnum and Bailey Circus at one time, so I'm expecting great things from this adventure.  This "performance" will surely not be public (I don't believe that's what she has in mind, nor do I), but will happen at her studio.  But it will be a guaranteed high point in my life, and I can cross another item off my bucket list.

Posted by Betty Reid Soskin at 7:06 PM No comments: