The sounds of revelry are beginning to fade ... banners stored away... and life is back to what passes as normal ... .

One would hardly think that so recently we were in the throes of celebrations that rival Mardi Gras and New Year's Eve rolled into one.  Tossed the fading bouquets out of their temporary places on tables and desktops around our offices, and finally ... gradually ... life has become breathable again.

Monday morning I checked into my week's schedule to find that I was booked to give a talk for the womens's group at Downs Memorial United Methodist Church in South Berkeley on Saturday (that was yesterday).  Actually I've been looking forward to this engagement since the church is in my old neighborhood and has an African American congregation.  Its pastor at one time was an old friend, the late Rev. Roy Nichols, whom I remember most fondly.  This was a rare opportunity to share my work for the National Park Service with an all-black audience, and that feels good.  On Tuesday, 5/31, I'm scheduled to be the luncheon speaker for the Mill Valley Rotary Club in affluent Marin County.  The audience will probably be mostly male and white.  That  provides an interesting challenge to deliver the messages of the era of the Home Front before vastly differing audiences without compromising the truth.

Also, in the interest of another personal project, I was scheduled to finally meet with Tom Debley, recently retired Kaiser Permanente journalist/historian/archivist, who will lead me through the process of researching a tiny 20-room hotel in Richmond that figures in the Pullman Company history. The International Hotel was a "Jim Crow" facility where porters stayed while the luxury sleeping cars were being serviced and stocked in the huge terminal on Carlson Boulevard and South Street before heading back across country.  The Pullman Company served as a major employer of African Americans as laborers during the 20's through the 40's. The main Pullman hotel, where white employees were housed (a short distance away at the corner of Carlson), has been long since torn down with no sign that it ever existed.  The International, on the other hand, still stands isolated and abandoned in a state of decay that is heartbreaking.

Fortunately, I've found someone willing and anxious, and who has the financial resources to purchase it for purposes of restoration, and since it falls well within the interpretive areas of my work (related to WWII housing for blacks), there is hope that we'll bring it back from the edge.  It was formerly owned and furiously protected by the late Ethel Dotson.  It was left to her son and only heir with whom we're negotiating its fate. 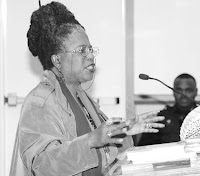 "... foremost of Ethel's concerns was an obsessive dedication to the restoration of the tiny International Hotel that housed black railroad men on their layovers prior to and during the decades preceding WWII. She continually called out for whatever action might be necessary to save this important landmark. My ranger partner, Lucy, and I visited her there one day and were treated to a tour of the 20 tiny upstairs single-occupancy rooms and the cluttered large reception room on the ground floor that reflected her personal taste for the flamboyant. She proudly showed us her collection of newspaper articles and vintage photographs that spelled out the history of her struggle to protect the building for posterity -- for the telling of this important Black migration story that preceded that of World War II. The stories of black waiters, cooks, and Pullman porters who discovered the West Coast and the Bay Area (as did the men of my own family) at the far western end of their railroad runs on the Acheson, Topeka & Santa Fe and Southern and Western Pacific rail lines -- decades before World War II."

If our work is successful, we'll provide justification for its restoration in order to be able to interpret the Pullman story.  It is of value to the black migration story as it is one of the few remaining structures -- not destroyed by redevelopment agencies and/or loss of institutional memory.

On a related mission, I drove in on Wednesday evening to a meeting where members of the A.I.A. were doing a series of PowerPoint presentations from a list of endangered historic sites for re-consideration.  Our little hotel is on that list.  I sat through them all believing that it would come up, but they didn't get around to it at this meeting, but I've been invited to return in the very near future to make a case for its restoration.

Meanwhile, Debley and I have had our first meeting and I've received from the Redevelopment Agency a study of the Pullman Company that is fascinating as much for a profile on Bay Area labor history as it is specific to the story of the little hotel.

Now, would you believe that my 4-year contract (what's called a term position) with the National Park Service comes to an end in July?  My job has been posted -- I've applied for it, again, of course -- but stay tuned.  This all may fall to someone else to complete.  As it works in the system, the decision is made elsewhere in the country from a national pool of applicants, and only if my application is in the final selection among those who are being seriously considered for the position, will I be re-hired.

If only the job had been posted with the proviso that "no one under 85 need apply."  Or, "must hold honorary doctorate with a degree in the Fine Arts"! But that may be asking too much; do you suppose?

It would be terribly sad if I stayed beyond my capacity to serve ... and how on earth will I recognize the signs?
Posted by Betty Reid Soskin at 5:17 PM No comments: