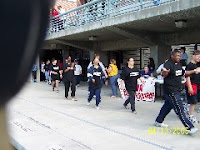 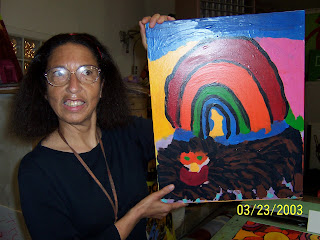 Life has its way of humbling even those of us flirting with true celebrity ...

On this past Monday, even before the confetti had stopped falling -- in fact -- at the very moment that I was standing before the cameras participating in a press conference in nearby City of Oakland's City Hall at the request of Mayor Ron Dellums' office -- it was happening. On the streets of the Iron Triangle in Richmond Dorian was fighting for her life. I wouldn't learn of it for several hours.

For the past year she has been living in public housing in mid-town Richmond as a client of the Regional Center of the East Bay and in the care of the Harmony House program, one of its vendors. The Regional Center is funded by the Lanterman Act of the State of California which was created to support the lives of the mentally-retarded and those living with Autism. She has been supported in this way since she was very young; one of the great programs of this state -- though plagued by ever-increasing budget cuts now for many years. The safety net that this ground-breaking legislation was intended to provide has now all but disappeared, making it almost impossible for its clients to live independently out in communities without almost impossible risks.

Since Dorrie was very young, I've been deeply aware of my responsibility to prepare her throughout life for living without me in it. That has meant teaching her to use the systems in place for her instead of using them myself on her behalf; not an easy assignment. It has been painful at times when it would have been so much easier to do that in ways that lent comfort to my mother's zeal. That would surely have meant holding her in a state of perpetual infancy; intolerable and unfair to her.

This has meant taking risks and at times, going against the professionals in charge of her life. Most times , I've opted to follow my own intuition and bucked the system when I felt it necessary -- like making it impossible for her to produce children in favor of allowing her to live out her sexuality without fear of bringing forth another life that she could not parent; in this state I acted illegally, but I am still convinced, wisely.

The call came on my cell phone. She was sobbing wildly and could hardly speak! She had been attacked on the street and her cell phone taken away. A woman had grabbed her around the neck leaving huge scratch marks where the skin had been torn. She had been pounded on the back with fists and knocked to the sidewalks before being rescued by passersby who rushed her to a home nearby and called the police and fire department to the scene. It must have been horribly frightening! And the little cell phone that serves as the updated version of a virtual umbilical chord to her mother had been seized by her assailant and taken away! Can you imagine the terror for her... .

I made an immediate call to the woman who is charged with directing her life (the director of her program) and who cares for a number of handicapped residents of group homes and individual apartment dwellers throughout the area, all under her supervision. I needed to set her in motion before I -- in my maternal zeal -- swooped in to save my relatively helpless daughter. I would wait until Barbara had responded before moving in. The lesson here is to always make sure that the response came from somewhere beyond me in preparation for the day when I'm no longer around and she then must depend on others. That's probably the most difficult thing to learn in mothering the mentally handicapped. Having to stand back when there's nothing in the world you want more than to sweep in and take charge is almost unbearable! This was one of those times. I withstood the test, yet another time.

I'd seen it coming. It was inevitable. The little one-bedroom apartment she lives in is situated in a gigantic six-storied building originally intended as senior housing. However, over the years and after many series of state budget cuts, it now holds about 70% of seniors eligible under public assistance guidelines intended to care for those in the lowest-income brackets, with the rest of the residents made up from handicapped adults, ex-offenders and recovering addicts. A lethal combination, right? Combining the most risky of adults with the community's most vulnerable is a prescription for disaster.

I have an appointment at Monday noon -- to have lunch with the director of the city's Housing Authority. I've invited him in order to talk about that policy. Maybe I can put a face on it by talking about the woman from the third floor who was the assailant -- just a block or so away from the Hacienda housing complex. The fact that she'd become an occasional visitor to Dorian's apartment who lives on the floor above -- in order to lift a Nike jacket (a prized possession won at a Special Olympics competition), some lingerie and other small items over time. That Dorian, with her ten-year-old mentality would meet her on the street and demand the return of her things which by now included her cell phone -- with the woman then brutally attacking and beating her badly enough to require a visit to the emergency room.

I'll not go to work in my new uniform on Monday, but will be muted in my serious black suit as an equally serious mother with a cause. Maybe -- quietly -- without fanfare and with nothing more than some common sense I can start the process of getting the bureaucracy to take another look at the human tragedy of bad governmental policy.

Dorian is at this moment still asleep on her futon in the next room. I've brought her home again to heal. Mostly because of my fear, I'll not return her to her own apartment for another day or so. Her physical pain is about over, and I don't know what she has learned from the awful encounter. She seems relatively calm and expresses little fear at this point. But I don't know if that's a good thing. There are some things that warrant fear and that her mental capacity doesn't include. One has to be above an IQ level of at last 70 points before one is capable of judgment or weighing consequences; a fact that I once read that has always haunted me... .

Photos: On the left is a picture taken at the Special Olympics swim meet at Laney College where she won two first places ribbons and a third; though in these events everyone receives ribbons. Medals are pretty meaningless except as ornaments within this context. I've always loved that about these games where cooperation is valued over competitiveness.

Right: Dorian the NIAD artist (National Institute for Artists with Disabilities) proudly holding one of her happy paintings called "Lion with Rainbow."

Posted by Betty Reid Soskin at 10:00 AM No comments:

Oh, I did inquire about whether restrictions against blogging might be in order now that I'm working for the national park service, officially.

It appears that -- as long as I use common sense there are no ethical issues involved, so until further notice, I'll try to trust that my judgment is sound enough to protect me from any indiscretion.

I'm guessing that blogging is a relatively new phenomenon, so hasn't had time to get into the rule books yet. Maybe if I were to ask that question a year from now, there would be regulations and codes to cite that would govern content to some degree.

I've already noticed just a hint of self-censoring when I'm under that hat. I feel about a half-inch taller and may find myself intimidated from time to time, simply because of the uniform and the feeling of responsibility to those around me who are also badged and hatted. I suppose it's a bit like being in the armed services, though that's beyond my personal experience.

I'm also aware that -- as a woman of color -- my very presence in a room in full regalia sends a message to every youngster within reach that they, too, can dare to consider this career path. Maybe that's the great message of that front page story.

Perhaps that's not such a small thing ... more than just another slow news day.


Posted by Betty Reid Soskin at 8:53 PM No comments: 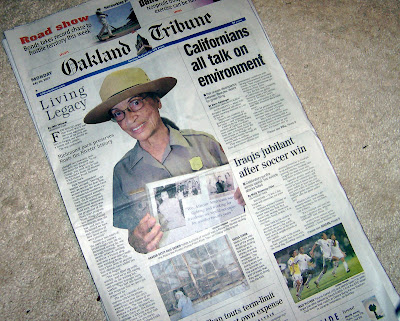 Last Sunday (a week ago) there was a fairly modest story about our tours in the West County Times with an equally modest photograph of yours truly. I knew that it was coming having been forewarned by the columnist who had ridden along on one of our tours a couple of weeks before. I'd been prepared for that. What I wasn't prepared for was the following day (on Monday) when -- on an errand through the reception area of the city manager's outer office -- I caught just a glimpse of this edition of the Oakland Tribune among the collection spread out on a large round table -- of regularly displayed daily newspapers that are subscribed to for the city hall staff. I was stunned for just a minute. It couldn't be, yet it was. The front page lead article with a photograph covering the 4 first columns both above and below the fold with a continuation of the story on page 9!

It was the very next day, on Tuesday, that we woke to the news of the death of legendary San Francisco Forty Niners coach, Bill Walsh -- and the passing of brilliant movie director, Ingmar Bergman. Within 48 hours Oakland Post managing editor, Chauncey Bailey was gunned down cruelly on a street corner.

As it turned out, the article with photos apparently appeared throughout the Bay Area since I heard from friends in both the Diablo Valley and Marin County. The Oakland Tribune is one newspaper in a large family of papers that are distributed throughout the area.

Not sure what it all means, but the thought that rises above all others is that it was, indeed, a very slow news day.

...but out of it comes an invitation to be the object of Show and Tell at my granddaughter's elementary school. After all, how many fifth graders do you know with grandmothers who are park rangers?
Posted by Betty Reid Soskin at 8:28 PM No comments: