Been nursing a cold all week, and am now up against a commitment that is probably the reason for the virtual collapse into a sniveling matriarch ... .

Within the next few hours I'll shower and dress to take BART across the bridge to San Francisco where I'm scheduled to address the Daughters of the American Revolution at their monthly meeting. Superintendent Martha Lee has assured me that I can handle this. I hope I'm worthy of that trust. The event is being held at the War Memorial Building in the Civic Center. And if that isn't enough to curl my toe nails, I'm doing it alone. My partner, Lucy, is on a panel at the Mosconi Center at a conference of landscape architects.

I'm not at all sure what I will say, and will sure try to remember not to mention Marian Anderson ... .

But I'll try to report on this new adventure later this evening.

Posted by Betty Reid Soskin at 10:01 AM No comments: 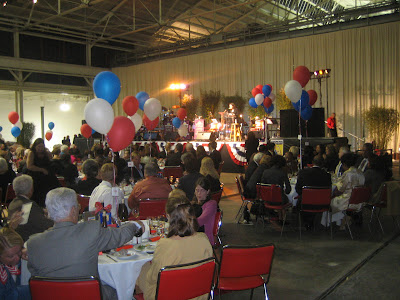 Author, Emily Yellin, of "My Mother's War" giving her address at Friday evening's Gala banquet hosted by the Rosie the Riveter Foundation.

Photos by Tom Butt, Richmond City Councilman.
Posted by Betty Reid Soskin at 9:53 AM No comments: 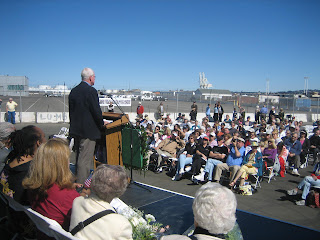 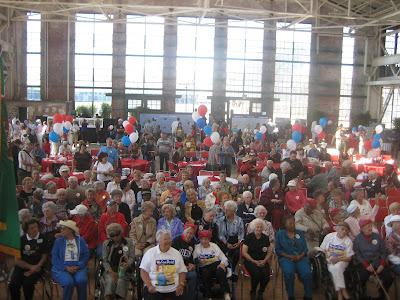 Photo 2: Inside the Craneway at the beautiful Ford Building on Sunday. Rosie's came from faraway places to be celebrated at the 1st Annual Home Front Reunion. This magnificent historic structure will eventually house the Reception Center for the Park.
Posted by Betty Reid Soskin at 9:19 AM No comments:

It's over! The great 1st Annual Homefront Festival was hugely successful -- and will take its place now as "Tradition!"

...and that's precisely the way it felt; like we were in on the birth of something immensely important. Every moment was filled with meaning and every person who stood witness seemed to reflect it.

After months of preparation; seeing things fall apart; dealing with missteps and challenges; starting over a million times; then learning to trust that somehow it would all work out; the sheer act of faith of every such endeavor. The National Park Service was everywhere, beautifully efficient, proud, excited, and ready to serve. It was our moment.

On Friday evening the invited guests (corporate types, community and business leaders, elected officials, etc.) gathered in the magnificant Albert Kahn-designed Ford Assembly Plant re-named "Ford Point") for an elegant Gala banquet hosted by the Rosie Trust. This is the Foundation formed to support the work of the park. I was a guest of historian, Tom Debley, of the Kaiser Permanente Corporation at a special KP table -- one of several. The house was sold-out and the ambiance like nothing I've ever felt in this city. Success and goodwill have arrived on the wings of the establishment of this long-awaited new national park, and that feeling was reflected in the faces of all those gathered.

The guests had come from as far away as Washington, D.C., and represented the National Parks Foundation, the Kaiser Permanente Corporation, the Coalition of Kaiser Permanente Unions, PG&E national leadership, local and regional banking industry reps, Chevron-Texaco Refineries, regional Chambers of Commerce, the Council of Industries, etc. These were the board members of major contributors who may hold the future of our park in their hands over these next years of our early development. This was an incredible start to partnerships that see our work as a vitally important contribution to the telling of the stories of this nation for posterity.

Sunday morning brought together from the far away places, at least 150 "Rosies," in a reunion that would last from eleven o'clock in the morning until three in the afternoon. They came in on two feet, in wheelchairs, with walkers, many supported by family members, and all beaming and eager for recognition -- finally!

I shared emcee duties with Kaiser historian, Steve Gilford, with whom I've been working for weeks in preparation for this new role. Steve and I and Artistic Director of the East Bay Center for the Performing Arts, Jordan Simmons, had created a program for the day that would feature young actors from the Center reading from oral histories; Steve doing historic pieces, vintage music, and reminiscences from those gathered. We might have done well to have skipped everything else and just turned the mike over to the women who'd come to be honored.

It was my job to move about the audience with a microphone as hands were raised to share memories evoked by Steve's factoids ("who was the original Rosie? What about rationing?, where were you on December 7th?" etc.). Mattered not what the subject was, as the mike was placed before them almost every woman started with, "...I worked in shipyard (or aircraft plant, or munitions factory, etc.) as a riveter (welder or bucker or dispatcher, or, etc.) and off she went! There was no need for prompting. They were there to tell their stories and little else mattered. Finally the nation was taking the time to listen. What a moment to be a part of! One woman started her statement with "... my husband recently died, and..." at which point she dissolved into tears -- my arms went around her, automatically. In that moment she granted permission to every other women in the room to be real and to use the moment in ways that held meaning for themselves.

They'd been primed by the Ken Burns' series that is being aired nationwide and further encouraged by this weekend's homage to their service when the country beckoned long ago.

The universal theme for the poignant and beautiful story of the afternoon was, "...why did our country wait so long? When will this Reception Center be completed? It was clear that each feared that she would not live to see it fully operating and felt frustrated. How sad! But that will be true for me, too. I can only be grateful for the chance I'm having to be in the middle of the work of moving that reality "with all deliberate speed."

We'll have to pray that this dream has a better chance of being realized more rapidly than that other dream -- the one projected by Brown vs. the Board of Education that appears to have been gradually derailed over time.

What a wondrous day it was for us all. What a wonderful future lies ahead; if we can only move fast enough now for those heroic women of the WWII Homefront to see it unfold -- with "Rosie" on the marquis.

Will try to recapture some of the highlights of the weekend -- with photos -- but right this minute I'm a little too close to it -- and find myself blinded by the muchness of it all.

Posted by Betty Reid Soskin at 1:05 PM No comments: