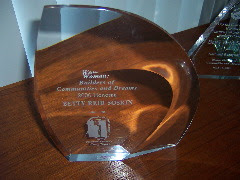 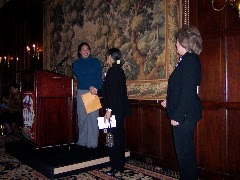 Posted by Betty Reid Soskin at 1:50 PM No comments:

Interview with Richard Dion from The Soul of California, Podcast from Germany ... .

... went well, I think, though I have no way of knowing, actually.  I have no idea what audience it will be aired for, or -- since it was in English and not German -- whether the intended audience is in Europe or the United States.  The Internet had made the world so small that one can originate programming from almost anywhere -- including outer space.  The direct connections have been obscured irreversibly.

It occurred to me that -- when I'm giving my talks in our little theater with its limited seating capacity (48) the intimacy is so clear -- that it's possible to deal with sensitive subjects easily, and that fact colors my presentations, and keeps my truths fresh for me.  As long as I can see faces that are hearing my words for the first time, those words continue to be alive for me.  Were that not true I think my talks would not be possible without gradually going predictable and boring.

My talks tend to vary over time, with differences in stresses and accents because my audiences continue to bring newness and freshness with them each time they enter into my small circle of listeners.  New questions give rise to new or changing memories; the dynamism goes on.

It is hard for me to establish those conditions with a radio audience.  If I allow myself to stray from the singular voice of the person on the other end of the telephone line -- it tends to become diffuse and I lose focus.  On the other hand, if I simply stay with that voice (an audience of one) maybe  something gets lost ... .

I'm so dependent upon the ambiance provided by my setting that it's hard for me to judge whether my effectiveness comes through when the access to those faces, eyes, questions, are not possible -- as in radio interviews -- that these are a waste of time and yield little but noise.

Maybe that uncertainty is the reason that I tend to never listen to those programs after the fact.  Maybe I'm afraid that I've not lived up to expectations -- the reason my opinions are sought by
"the World," and that I must not trust this publicity-manufactured celebrity at all.

Posted by Betty Reid Soskin at 2:42 PM No comments: