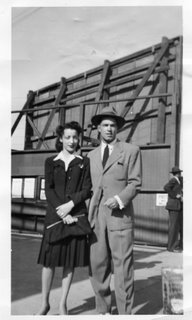 Oh to be young again! Rarely have I experienced this particular regret ... yet ...

In listening to the hearings of the Judiciary I'm finding myself chewing the draperies and licking the wallpaper!

Unfortunately, in the middle of the testimonies I received an email that was blasted by Rev. Paul Sawyer to a broad list of Unitarian-Universalists across the country. It sounded so "reasonable;" didn't fit my rebellious mood one bit. I wanted more outrage! Couldn't resist the temptation to respond from the place of anger that has been eating at me here where there is little distraction given the fact that I'm home from work with Dorian suffering from a severe upper respiratory infection. Dorrie is developmentally-disabled so that the level of conversation is somewhat wanting. I was in no mood for "reasonable!"

So-saying, I sent off a flippant reply -- blasting it to the entire mailing list -- and felt better for a few minutes there.

In no time at all came a cautionary reply from a former president of the UUA, with more than a hint of annoyance and a curt bid for patience and fortitude on my part; inciting more resistance and defiance from a little ole lady who's earned her stripes and isn't ready to back off one iota.

How on earth can he or anyone know that I'm speaking from a body of experience that does little to encourage a rational response to an irrational world?

1. I was born an African-American woman to a world that appreciates neither.
2. Was 27 years-old when my slave ancestor died at 102 (whom I knew), so slavery is no abstraction but a living-breathing continuing factor of my being.
3. Lived through a young adulthood scarred by Jim Crow and blatant racial segregation after a childhood of relative acceptance (WWII migration into California),
4. Lived for 20 years as the mother of a young black family in an (all-white) California suburb where fighting for rights was both personal and collective, and sometimes perilous.
5. Raised an openly gay son to adulthood only to lose him to his inability to survive that world of physical abuse, social rejection, and alcoholism into a thinly-veiled suicide.
6. Spent 10 years as a university faculty spouse of a European professor -- and learned new levels of discrimination.
7. ...then another ten or so years as a social activist and black merchant in a welfare community followed by another ten living and working in the belly of the beast ...
8. ...as a field representative to one then another of two powerful members of the California State Assembly.
9. I'm still working fulltime with racial discrimination a continuing factor in my everyday existence. I'm working with the National Park Service in a newly-created park that enshrines Rosie the Riveter/Home Front of WWII, another era of overwhelming racial segregation. The sensitivity with what such enterprises must be approached is critical to our not supporting that which we have outlived, painfully, as a nation. I'm fine-tuned in ways that most are not, I'm sure, but have a sense of being quite able to work with those elements in ways that serve the greater cause of unity with a team of people who are sensitive to the needs and make every day worth rising for.

Having said all that; it felt right to express my impatience with the charade that I'm seeing on CSPAN this day. Those who are clearly challenging this appointment and demanding direct answers to direct questions are comforting to witness. The patronizing drooling cheek-patting Alito supporters on the Judiciary are infuriating and give me that familiar old feeling of being the only grownup in the room. I want to shake these powerful men until their teeth rattle and their wigs fall off!

Maybe demanding that room be made for those of us who've lived differing realities is not "reasonable." But, to be an aging grandmother who will leave behind progeny who will inherit this awfulness does little to encourage a rational response. I've given much and sacrificed much pride in the interest of social progress. Now age has brought a sense of urgency that will not be denied. There's no time to do it over. There isn't the time to try to convince those not already on the path -- so -- as it was during the Black Revolution of the Sixties -- I'll trust my anger to those with whom it may have some effect. The silent promise of our nation's founding documents plus those of a denomination where much of the work has already been done is seductive, indeed, and tempts me to continue to prod and poke ever in the hope that -- just a little nudge here or there ... (we've come so close at times in the past).

But patience wears thin, and voices become harsh and rasping as years go by and ... .

and ... time will not permit hesitation if my grandchildren and yours are to inherit the benefits of the just society we've worked and fought so hard to achieve, and for which so many are continuing to die.

Photo: Mel and Betty Reid (moi) photographed in front of the Oaks Baseball field in Emeryville. At that time he was playing for the Oakland Giants professional football club (circa 1943).

Posted by Betty Reid Soskin at 12:05 PM No comments:

Appeared at Pacifica's flagship station late on Sunday afternoon for the agreed-upon interview. The interviewer was held up elsewhere and I found myself with an hour's delay before we could begin the work. Maybe it was during that time that I lost the intensity I needed in order to fulfill my self-expectations.

It was interesting to find myself here -- with others waiting to tell their stories. I didn't know quite what to expect, but to find myself taken to an upper studio to be not only audiotaped but in front of a camera for videotaping was something I wasn't prepared for. I'd not worn makeup (except for a little darkening of eyebrows that have mysteriously begun to disappear(!), and a little blush on cheeks. Womanly vanity would have dictated some thought be given to the shape of my neckline or earrings, or something ... .

The interviewer asked reasonable questions but I couldn't find resonance within myself so the words felt dead leaving my lips. It's all beginning to feel warmed-over now -- too-oft-repeated, and I felt a little embarrassed to be here at all. Not sure why that is. The truth is surely worth expressing and the history lived by those in our age group is fast-disappearing into a past that was tumultous at times -- and surely worth making note of. We are the carriers, the grios of our personal histories and those histories express universals -- we're not as different as our egos might suggest so -- in a way -- my story is one related to all stories of these decades.

Maybe it's the differences between written and spoken words that best explain my reactions to the experience at the studio. It was the last entry here about the Bancroft Library interview in this journal that made me aware of those differences. Is this the way this will sound -- that will go out over the airwaves next Monday to casual listeners? Will the words spill over themselves in a torrent of meaningless noise? Am I not far more comfortable here writing in a proper sequence where these symbols of meaning can't get lost in the utterance of them?

Maybe I'd far rather write ... yet there is an awareness that there is some arresting quality that I sense in the audience when I speak the words. Wish I better understood ... . What is the "x" factor that I'm missing?

There is the memorable experience of speaking before the audience at the National Women's History Project conference at Mills College last summer. It effected me profoundly -- and apparently did the same for those listening.

Maybe it is truth that has a life of its own -- and that the carrier is only incidental to that. I truly don't know... .

Photo: Speaking at a Starr King School for the Ministry commencement at the Oakland UU Church while serving as a member of the Board of Trustees.
Posted by Betty Reid Soskin at 1:34 PM No comments:

After writing that last post I spent much of the afternoon reading back through the binder that holds the oral history done in October of 2002. I found the affirmation I was looking for -- some place in the re-telling of my life story that confirms a high place. I noticed immediately the huge difference between the written and spoken word. There is little coherence -- the words spill over themselves in the telling. Interesting:

So when you were in high school, do you have any memories of teachers who especially influenced you? You told me that at one time you were reading a lot, I'm wondering ---

Soskin:
This one teacher would light up. I could see his face light up when we'd meet in the hall and he would ask me challenging questions. And to this day, I can remember a long exciting debate in his public speaking class -- about euthanasia -- and I remember that the kids went off -- as people do -- into that fine line between euthanasia, murder -- the risk of people being intentionally eliminated. I remember raising my hand and waving it wildly to get his attention and having him ignore me for a long time and knowing that he knew that I knew but that it wasn't time yet to let my comment into the room. And I was aware, even as -- I guess I was a sophomore at the time -- I can remember being -- having a sense of being on the same level with this teacher -- because somehow we both knew that I knew. Also that I was cooperating with his game about not saying it yet, and finally toward the end of the debate of having him--or maybe it wasn't a debate but rather a discussion -- and having him point to me so that I could say, "...but you're no longer talking about euthanasia. You're talking about murder," and having him grin and say (finally!) "Ah-ha!" And having this sense for the first time of being at an adult's intellectual level and how freeing that was for a kid. I looked for these moments in time with my own kids; those moments when they hit something that we could relate to as equals; that were new for me and breakthroughs for them. I wonder sometimes -- in teaching -- how often people are aware of how great that is when you hit it? Mr. McLaughlin was probably the only high school teacher besides my drama teacher that I remember now. I'd know him today were I to meet him in the hallway. I remember her because she was too fearful of criticism from parents if she allowed me to play Maria in Maxwell Anderson's Winterset with a white male student playing the lead. She kept me in after the bell rang to apologize for her lack of courage but lauded my reading of the scene.


Found myself grinning silently as I read this today -- realizing that my face had softened and that somewhere inside that little girl still has a sense of knowing ... and that most of that comes through intuition -- a kind of sixth sense that came into the world with me. The confirmation for even the most seemingly outrageous and risky civil actions comes from that place inside. The only time I feel lost is when the world crowds out the sounds of my own heartbeat... the drumbeat to which I've always marched .. even when I can't see those who march with me.