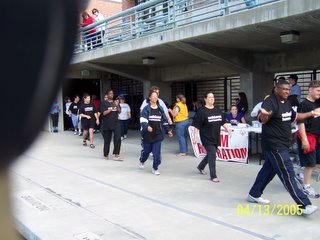 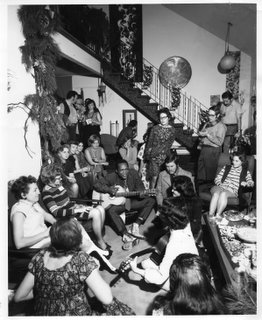 Worked through something of importance this weekend ... .

Beethoven's Fidelio experienced in juxtaposition with brilliant jazz violinist, Tarika Lewis, and the renown John Handy on saxophone dueled to a neat finish this weekend. What a convergence of arts and culture this was for me! I'd never have dreamed ... .

The opera was a combination of sounds and spectacle and craziness of a kind that sent me into giggles -- alone in bed late on Saturday night. The music was wonderful -- once I allowed myself to shut out the 275 pound mezzo contralto playing a "lad" in duet with a lovely delicate and svelt young blond ingenue whose father was an African American baritone in a blond/grey wig and all singing in German!

Following the libretto provided on screens on either side of the great opera house stage proved pure folly since opera is apparently not about libretto at all but about music. And casting is not about obesity but about purity of tone, stage presence, and projection. And once I stopped trying to force it to make sense -- closed my eyes and rode the waves of Beethovian music -- it all worked. But I had to work at it. There's an inescapable intellectual component that doesn't quiet easily. A major cultural difference.

This evening there was another family memorial service. This was the younger sister of Dorothy Reid Pete who died recently at the age of 90. Florence was 88. Her only daughter, Joan Tarika Lewis is a brilliant violinist -- a jazz violinist. She's toured the nation and the far east with the famous saxophonist, John Handy, who played for us this evening. It was a memorial service like no other. Tarika is active in African drumming and dance circles so the evening was filled with both as her friends joined in the celebration of her mother, Florence's, life. They were in colorful African costumes. There was a traditional Libation ceremony that reminded us all of that which binds us together across the ages.

The discovery for me was that here in this room the experience of music was purely emotional. Visceral. No thinking here. Just feeling and letting it wash over me. I could anticipate the notes before they were played. I know this. Here were both the notes and the music!

For the greater part of the evening (it was held at Geoffrey's, a smart supper club in downtown Oakland), 15 mm films from the family's archives were shown on a large screen -- while the musicians improvised.

There were scenes from their early marriage and when Tarika and her late brother were very young. Florence's husband and Tarika's father, the never-defeated light-heavyweight champion of the world, John Henry Lewis, was shown in one of his historic bouts. He died in 1974. This was truly the end of an era for their family. This is the family of Mel Reid, my late first husband and the father of our children. I'm still a celebrant when the occasion demands. This is my tribe, too.

As an aside, I can't recall the source of the saying, but it may have been Atlas who claimed that he could lift the world high in his bare hands if he only had a place to stand.

On the drive home I realized that this is what African-Creole history and culture are for me. They're my place to stand. All else flows from that.

Photo: Don't recall the year, probably in the late Sixties. I'm in the lower right with guitar -- back to camera. The other musician is visiting from the Caribbean. Cultures blended nicely that night. These were Unitarian-Universalist friends of the Mt. Diablo Church. These were the best years just before my return to Berkeley in the early 70s.

Posted by Betty Reid Soskin at 9:57 PM No comments: 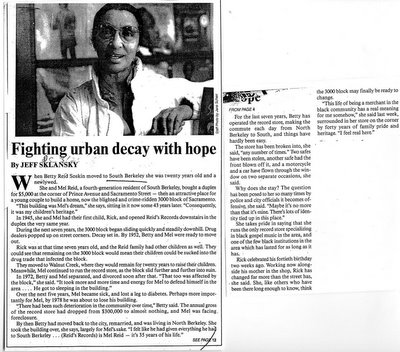 A dear friend and important historian dropped by for a meeting today and in the process dropped this news clipping into my hand. She'd been rumaging around in the Berkeley Main Library and run across this article. It was archived from the now extinct Berkeley Daily Gazette and is dated March 28, 1985. The words of the writer evoke such memories. The article is a reminder of life as I was living it at the time -- and rings quite true -- even in hindsight.

(This is a thumbnail. Click on it to open.)

Posted by Betty Reid Soskin at 9:45 PM No comments: