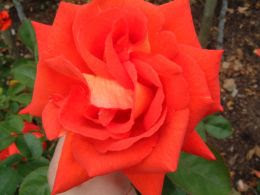 Talk went well, I think, and I learned some "what not to do" things that will serve me well next time out ... .

There was an interesting group of women gathered in the Rockridge Library yesterday. They came from as far away as Sacramento, Pleasanton, San Jose, and San Francisco. There were a few old and dear friends and some new faces. A reasonable number of the faces that looked like mine. The audience was receptive and easy to connect with -- and the subtle smiles and nods of agreement and grins of relief that I was telling "our" stories with candor and without apology was effective, I think. That I could do this and be appearing before them as a fully-credentialed park ranger held its own power, and I believe spoke well for the NPS.

I'm beginning to enjoy my role and to know how civic engagement and community outreach are implemented in my work life. There is much still be to learned, and not too much time in which to do so, regrettably. Wish I could go back and begin this all again somewhere in my 25th year! The confidence and skills I've begun to acquire are developing too late in life to benefit the work -- work that is so terribly important in these years of monumental change.

Thoughts of all those things I forgot to say haunted me late into the night, but fortunately it isn't too late. There are all those upcoming speaking engagements to prepare for. Yesterday was important in that it enabled me to begin to better shape the message. To have been able to fill 20 minutes with talk and then to handle a Q&A for another 20 was a monumental achievement for one who usually can't fill 6 minutes (before an audience) before going mute!

Discovery: The weight of being the focus of attention for that extended period of time can be overwhelmingly powerful. It was an instant flash -- electric -- something at the psychic level -- unfamiliar. Adrenaline rush? As I became aware of it -- the old reticence clicked in and I unceremoniously (and not too gracefully) ended my talk and dropped into a seat in the front row -- without even a concluding sentence or two. Not even a "thank you" to the audience or to the organization. It was awkward. The woman conducting the meeting asked me to rise again for a Q&A -- and I rose immediately to my feet and took their questions. It was as if the strange sensation had never happened. I'm certain that no one was aware of how that instant response to the realization of the intensity of the moment had effected me. It brought the talk to an abrupt end. I was suddenly quite literally speechless The feeling came and went in seconds -- but embedded within it was sheer panic.

After giving it some thought later -- sipping a hot cup of herbal tea in my pajamas and bed socks -- it occurred to me that -- one who speaks, acts, or performs before audiences professionally -- has probably pushed through that phenomenon to the other side -- and by so doing has been able to transform it into excitement. It must move through from panic to pleasure at some point. If such a transformation does take place, I can readily see where one's ego could become addicted to the experience. It was too new for me to benefit from or to even fully understand.

Next time I'll watch for it and be better prepared to move through it with more grace.

It only took an instant ... but I'll remember.

That's another unheralded thing about aging: I'm beginning to fully realize the preciousness of time. Of perhaps living the last of experiences each time something new or extraordinary happens in my life. There's a kind of savoring ... .

...the smelling of the roses?
Posted by Betty Reid Soskin at 2:13 PM No comments: