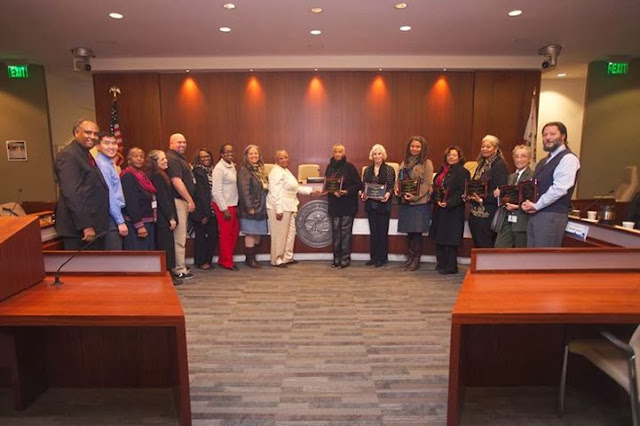 The past week not only introduced us to the upcoming Naval media project, but also I must acknowledge two "honorings" that marked this holiday season as more than just a time for being depressed over those missing in my life -- and finding myself at the top of the pyramid -- which is just another way of coming to terms with being the last survivor of my nuclear family.  Awareness of my mortality looms at the forefront of my life now, and never more so than over the past Thanksgiving weekend.  But I digress ... .

Richmond's Human Human Rights and Human Relations Commission honored me among a stellar group of hard-working activists with a Special Award that was presented in a beautiful ceremony in Council Chambers last Monday evening.  It felt somewhat awkward since the other honorees had many members of their friends, supporters, and families standing with them and -- except for Martha Lee, former superintendent of our park and Tom Leatherman, our current superintendent, my family was absent.  I'd failed (intentionally) to mention it to them, but there are times when I feel almost embarrassed by the amount of attention I'm receiving these days, and I'd already asked my son, David and my two youngest granddaughters, to escort me to the Channel 7 ceremony honoring those selected for their Profiles in Excellence programs two nights later.  Found myself overcome by an attack of modesty and just couldn't tell them of the HHRHUC event, too!

Which brings on something that's been looming in the back of my mind lately -- it's this:  Have I simply aged into a time where one receives honors simply for being able to spell one's own name or tie one's own shoes?  I'm surely extremely proud of being able to play what I see as a meaningful role in the shaping of a national park, and to be able to do so around what is still a rather controversial era in history, and to be able to do so without compromise -- that's a given.  But the extent and amount of attention that surrounds me of late seems excessive, and there are times when it truly leaves me puzzled ... .

That being said, may I add that a reporter for the Voice of America is coming to meet with me for an interview early next week, and on last Thursday afternoon I met with the producers of a project that will probably take up most of next year as they research and plot the filming of my life story for a variety of purposes.  It so happens that -- at least the past number of years of my life coincide with the beginnings of the park -- so is also the park's history.

Before that time, however, there is the rest of my bio that has become the basis for my presentations twice weekly in our little theater -- and is also -- quite incidentally --the story of the nation's social progress through the decades.

That's almost too huge to wrap my mind around, but there it is.  Do you wonder that I've been having difficulty writing about it all?

I blush even in typing these words ...

bear with me, though, as all of this begins to reveal itself in more understandable ways ... .
Posted by Betty Reid Soskin at 4:42 PM No comments:

It has been so long since posting that I hardly know where to start ... .

... maybe the place to begin is with the most recent developments in the ever-unfolding of the Betty Charbonnet Reid Soskin epic ... which involves an historic encounter with the Navy.  (See what I mean?  Does this not place a strain on all credibility?)

Some weeks ago a message was received by email from the senior producer/project director of an agency which produces content for Armed Forces Media, worldwide.   Her agency is called Defense Media Activity, (DMA) which is located in Ft. Meade, Maryland. She was announcing their interest in coming to Rosie the Riveter/WWII Home Front National Historical Park with the hope of doing a profile for an upcoming story in which I'm (at least) one of those to be featured.

Last Monday I met Princess Hester, a "sistah" to my delight, with her project partner, Kevin, who spent two days with me touring some of the scattered sites of our park and conducting a full hour's videotaped interview for the purpose of gathering material that will provide the content for their script.  They will return with a crew of 5 for a full week in January to do the filming of their story.

As has become the rule rather than the exception, much was learned from their questions; for instance, I had no idea that it was our Navy that enabled and supported Henry J. Kaiser's historic shipbuilding feat through a Rear Admiral (will supply his name later) through an Emergency order issued by the Navy.  It is that Naval history that they're interested in recapturing, a part of the forgotten stories that is in need of fleshing-out through this project.  Who knew?

To date we've been crediting the Maritime Commission with the sponsorship of the Kaiser contribution without the realization that there had to be a tier above Maritime -- and that was the Navy -- in order to facilitate the funding and the work.

I'm not certain how I figure in this scenario, except that it was learned casually over lunch that Princess Hester, Senior Producer, was apparently following my blog for some time and convinced whoever holds the keys to such projects that this was at least one channel that might provide a way into the story.  I'm still not quite sure of the connections.

The team will want to refresh the Port Chicago story with its mutiny trials -- still smoldering through a veil of semi-secrecy in the background -- as a part of their investigation.  We lightly touched on that volatile story, and doing so has reawakened disturbing memories and has remained with me many a night since their visit.  I'm still mulling that over, and am surprised at how much my sense of that history is beginning to shift, clarify, ... strange ... but I'll write about that as  it deepens.  Interesting.  I was startled to discover during the taping that I've not lived that trauma out of my system -- even after all these years.  Maybe this experience will serve to discharge the balance of the residual pain and bring some freedom from those memories; finally, for both me and for the Navy.

It was fascinating to take them out to scout out Point Molate, the site of Winehaven -- once the largest winery in the whole country which served as a re-fueling station under Naval command during WWII.  Prior to life as either a winery or a naval site, however, Pt. Molate was an important whaling station -- truly a part of California's historical narrative.  Our guests had not even heard of it previously, so it felt good to be able to be in on the excitement of their discovery.


Posted by Betty Reid Soskin at 1:58 PM No comments: