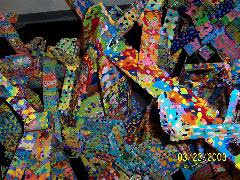 I was living in an intensity of far more than mind and body could absorb comfortably.  I knew that.  The last post describes it pretty well.  The fact that I rose that morning and -- within a few minutes -- in the pace set by my calendar -- brewed the usual cup of Earl Grey breakfast tea and booted up MAC to scan the incoming emails before jumping into my winter uniform (it's gotten pretty damp and cool since last Sunday), then took off for another day of busyness.  At that point there was no hint of anything out of the ordinary.

But, for some reason I began to experience some subtle visual distortions with just a little dizziness  -- "out of focus" which caused my balance to be precarious; maybe just a tad. Vertigo?  Was this "aging" setting in?  Is this how it would occur -- without warning?  Could this be the high blood pressure that my internist was on the alert for at my last checkup?  After all, she'd prescribed 25 mg tablets, halved, of hydrochlorothiazide for the first time when I went in this year.  I'd noticed no difference, however, and always had to remind myself to take them.  Had I taken one this morning?  Yes. I remembered distinctly doing so with the first sip of tea.

It made for an uneasy start of my work day.  Would they notice; those young rangers with whom I spend most of my waking hours?

I hopped into the car but found myself fumbling around in my purse for the keys (but hadn't I not used them only a minute ago to unlock the car?) and not finding them -- (Oh, here they were!)  Was this a sign of memory loss; at least a hint?  Dutifully checked out the rear vision mirror before backing out of my assigned parking space and the feeling of being not quite in focus persisted as I noticed a slight difficulty in judging the distance between my car and that of my neighbor ...  .

Drove off to our offices and spent the next few hours feeling "off" and wondering if anyone was noticing?  Should I just return home and wait it out?  But the fear that this was the onset of "old" kept me from giving in to these symptoms.  We'll see tomorrow -- (as if one ages in such increments of immediate time).

Then I got caught up in the rhythm of my day and needed to deliver copies of the newly-published Master Plan Summaries to the Main Library in downtown Oakland.  This meant signing out one of the federal vehicles for an hour or so. Routinely gathered up the keys from the key cabinet and logged myself out; climbed into the driver's seat and -- as I began to adjust the mirrors set by the last driver -- caught sight of my image therein, and,

I'd left home wearing my black-rimmed computer glasses!  Reached into my purse for another regular pair and -- instant cure!  A miracle! The world righted itself in an instant and -- Voila! -- I was young again!  But just for those hours, y'all, it was touch and go!

Photo:  One of Dorian's art pieces; a pretty accurate depiction of my faux mental state.
Posted by Betty Reid Soskin at 1:33 PM No comments: 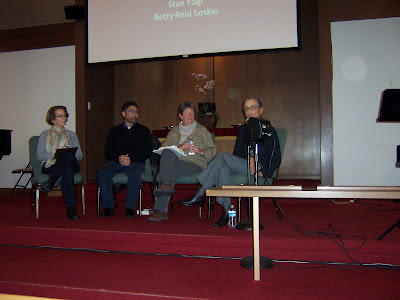 
On Sunday there was the panel for one of the final activities of the "Blossoms and Thorns" events which brought  me together with the co-authors of "Wherever there's a fight"; the history of the ACLU in the State of California."  We are pictured here  (without proper lighting) all-in-a-row - Historian Donna Graves, Stan Yogi, Elaine Ellinson, and me, in what turned out to be a fascinating discussion about civil and human rights.


The event was held at the East Bay Methodist Church.  The congregation is primarily Japanese/American and the church serves as the home of the Japanese/American Historical League; our hosts.   The audience was thoroughly engaged and responsive from the introduction to the closing words.


Unfortunately, this panel came at the end of a week of relentless intensity; 3 bus tours, meetings on end, and far too many hours "on" as opposed to taking time to breathe and to return to my normal rhythms except for a few moments-at-a-time.  Found myself pretty raw emotionally, and on the edge of tears throughout.  I know the signs.  It was time to pull back.  Tomorrow I would sleep in.  Begin to draw back from the edge ... .

I made a silent pact with myself to ask for ways to connect with some source of nurturing -- some place where I can interact with others in the field (interpretation, historians, social activists, black studies departments?) so that I can find some way of renewal -- so that I don't implode in public.

Would you believe that before the end of the week those prayers were answered?

It was then that I met filmmaker Dr. Shakti Butler and her noted cinematographer husband, Rick, whose work dovetails with my own in uncanny ways.  We met at her invitation at their hillside home with a spectacular night view over a home-cooked dinner of delicious baked salmon -- with white wine and good conversation that I'm afraid I dominated shamefully.  It was a homecoming for me.  How could they have known that -- on a clear day -- I could probably have seen the house where I grew up in the flatlands of East Oakland far below?

Much more on that later.

Posted by Betty Reid Soskin at 12:40 PM No comments: