Just received my first lesson in data-mining, I think ... .

A young cousin with a sudden interest in family history began to send inquiries about photographs online that I assumed were coming from the family tree I'd posted long ago (see The Betty Reid Soskin pages).  It soon became clear that -- from the questions being raised, this was not the source she was using.  At a point in the exchange of messages she mentioned Google Images -- an online website I was totally unaware of  -- with the words, "You're famous, Aunt Betty.  And these are the images people will be seeing forever!"  Enough for me to take a look.


What a revelation!  There are hundreds of photos under my name with most strangely unrelated to me at all.  (Try typing yours into the search bar on the site.)  I'm appalled!

Admittedly, those taken from my blog are fair game since they've been online for years (since 2003 when I started blogging), so I can't complain about their being used.  But anyone who has ever been photographed with me is also there, including my friends and relatives, and without their permission.

But it is the 75% that are not related to me nor to my name in any way that concern me.  I'm nowhere in those photos and among them are mug shots of suspects, at least one of skimpily-clad Elizabeth Hurley (former girlfriend of actor Hugh Grant) wearing nothing but a g-string; many men and women with whom I've never had any knowledge of nor contact with; anyone with whom I may have ever shared a cup of coffee or a conversation on a bus or in a waiting room (apparently) -- and it concerns me more than you know.

In light of current news about the collection of personal phone messages and email accounts by the (NSA) National Security Agency, and that I'm working for a federal agency with Hatch Act limitations (and with which I comply judiciously), I feel that the invasion of my privacy and Fourth Amendment rights are being seriously violated.

At my advanced age this may seem irrelevant.  What possible harm can be done by publishing such material -- given my limited future?  Probably little if any, but it should matter to readers, I think.  I'd advise you to check out Google Images -- both under my name, Betty Reid Soskin, and your own.  Maybe we should all be paying more attention to how we're being perceived out in the world by losing control over what we put out there for public scrutiny.

... now back to reading today's reports on those issues ... .  I cannot help but feel that there will be a chilling effect on what I choose to disclose here in the future. 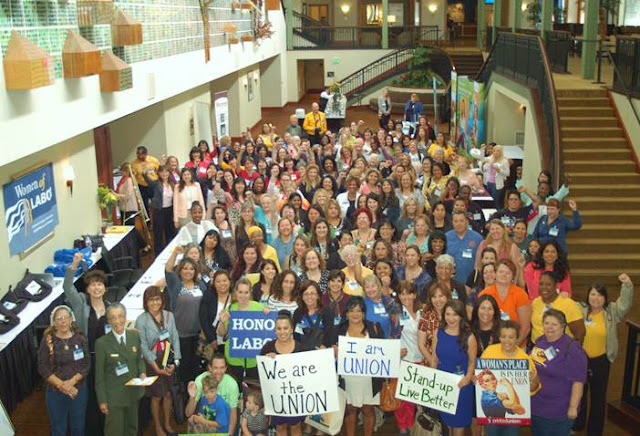 Had the honor of addressing the Women of Labor Conference in Sacramento on Monday ... and what a time it was ... !

There is no question that women are on the rise in society, and if what I witnessed was any indication of what the future holds, we're in fine shape.


Those now serving in the Congress, in corporate leadership in all fields, in the current administration, and now matched with those in the Labor Movement are exciting, ambitious, and capable of world-changing.  All signs indicate that this upsurge in empowerment is worldwide, and not limited to this country.  The influences being felt everywhere would suggest that it's only the beginning.

... do you suppose that the genesis of what we're seeing all started with Rosie the Riveter of WWII?  Maybe I'm being swayed by my current everyday life and work with the National Park Service -- and am limited by the context.

Posted by Betty Reid Soskin at 8:44 AM No comments: