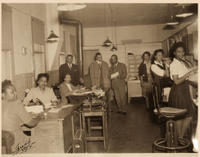 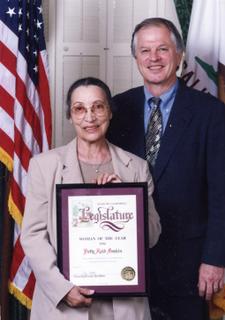 Life has closed in tightly but nicely, leaving little room for telling the stories ...

The work goes well, and I'm having that wonderfully rare feeling of fulfilling a role that no one else can; a role that is truly essential to the work underway. I can't recall when this has happened before in my life ... but I'm sure it has because there's a familiar feeling about it. Being in these advanced years gives permission to speak of it unselfconsciously, without false pride but with real appreciation for the enormous privilege I've been granted to continue being of service in the creation of a national park.

I'm building a data base for the planning of the community outreach component of the park. "Rosie" has been several years in the making -- and its come a long way. There are visitors arriving almost everyday from Everywhere, USA, to take the driving tours of the park-in-progress.

The archives are steadily growing and already scholars of the period of WWII are stopping in and requesting time and space to explore the collection of papers, artifacts, oral histories, etc. There's the steady click of computers in our temporary reception center at city hall -- as young interns continue the never-ending task of data entry and followup telephone calls to Rosies throughout the country who've made contributions that require clarifying information.

But there's an important area that will begin to come alive now. It's the place where my recent work experiences come into play. The city of Richmond and the surrounding constituency area of Greater Richmond (at least 4 small cities) need to begin to buy into their roles as host communities. It won't be easy. What has been designated by Congress as an urban national park made up of those structures that best tell the story of the World War homefront war effort, has been regarded for 60 years as blight awaiting demolition and redevelopment by those who've lived and worked in their shadows. It will take many visitors over the next few years -- folks who'll arrive with reverence and enthusiasm and a sense of honor that those of us who've lived that history must "catch." There will at some time be a tipping point where their reverence will become true for us, too. I'm sure of it. And for one who spent the war working in a Jim Crow segregated union hall, that's quite a statement.

History was not necessarily kind to many who were caught in the chaotic period of economic adjustment in the years following the declaration of peace. The temporary war housing was torn down only weeks after the war ended, casting many into homelessness. Jobs disappeared for most, unceremoniously without the necessary time to find work elsewhere. Displacement was a fact of life, and the option to return to the places from which they'd come was an unreal choice. Few were willing to return to the share-cropping fields of the south, or, to the kinds of poverty they'd known in places of even less opportunity. Women, especially, were no longer willing to settle for homemaking, exclusively, and the future for them was in the place where they'd learned new skills and earned their independence. The ground had shifted under us all.

Creating ways to explore that history in these host communities -- but doing so informed by the struggles that followed in national life will be one of the exciting results of having the park created on our shores. This may describe the most interesting work of community outreach; or it can.

Despite the great work of Henry J Kaiser in creating the most powerful defense industry in history (5 shipyards here, alone); the first 24 hour-a-day childcare program in the nation; the first HMOs; and giving birth to mass production on a scale unprecedented. He was on a mission to defend the country against the Axis powers. He was in no way conducting a social experiment. He created a huge "war machine" composed of thousands of willing but unknowing hands of every size, shape, and color -- hands attached to over-aged men, under-aged boys, and eager women from everywhere. He was running an around-the-clock battle to build and supply 747 ships (before war's end) -- some completed and launched in a period of no more than five days.

The human drama being played out in these communities over the next 20 years laid the groundwork for much that followed in the ensuing years. It would erupt into the Civil Rights Movement in the Sixties, and life would never be the same for any of us.

I, for one, went from the position of a lowly young clerk in that Jim Crow union hall on Barrett Avenue in those years -- to being named a "Woman of the Year" before the California State Legislature in the year 1995. That required tumultous political and social change in a part of the country that has never ceased to create many patterns of change for the rest of the country and the world to emulate.

The greatest of the untold stories may have occurred not during "The Good War," but in the years that followed -- as the direct result of our homefront experience in this rapidly-changing world.

That is surely enough upon which to begin to build the community outreach component of the Rosie The Riveter Homefront Historical National Park. Finding ways to re-open those much-needed conversations will be challenging but probably more rewarding than almost anything I can think of these days.

Nostalgia is beginning to crowd out the residual anger that's taken up space in my psyche for so long; space that I need now for other things. Perhaps that will happen for others as well.

Right photo: 1995 was a big year. Was honored by being named "Woman of the Year" for the 14th Assembly District by Assemblymember Tom Bates in ceremonies at the capitol in Sacramento.

Left photo: Office of Boilermakers A-36 (that "A" stands for auxiliary) the Jim Crow union out of which all black shipyard workers were assigned. It stood at 1600 Barrett Avenue, Richmond, California. Circa 1943.

Posted by Betty Reid Soskin at 6:06 PM No comments: 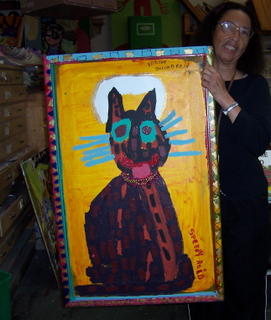 Transitions for both Dorian and her elderly cat, Speedy ...

Came home on Friday to a frantic call on my lan phone from Dorrie announcing through tears that Speedy was failing fast and could no longer stand and had stopped eating. It was not unexpected. Speedy had been obviously ailing for months and at the time that Dorian moved into her apartment two weeks ago, we'd acquired an 8 week-old kitten to soften the pain of the anticipated loss.

Drove over to her place to pick her up with the very frail cat lying quietly in the carrier (on a crocheted small coral-colored blanket made for her especially by Dorian). One look was enough to know that the end had come -- and that my dear daughter knew that.

She had been intending to stay with me overnight anyway, but now we would have another mission besides saving quarters by doing her laundry at Mom's. Now we would visit the vet for a final examination and possible euthanasia. And that's how it all worked out.

We drove to Berkeley on Saturday morning after finding no local veterinary clinic open on the weekend. So it was to the Animal Shelter we would go, or the SPCA might be appropriate if we could locate it. Discovered upon arrival at the shelter that they would not put the cat down without having a signed release from a vet. We found one nearby and learned that (as suspected) Speedy was hopelessly ill with liver or kidney failure with no chance of survival. However, it would cost $141 for the vet to euthanize her if they were to also handle the disposal. Having no wish to put my handicapped daughter through an extended experience of loss -- I bought the entire package and blessed my credit card in the process.

Dorian was not rushed, but sensitively allowed to sit and hold her much-loved pet until it seemed natural to leave her. I was grateful for that. She was tearful but resolute that this was the right thing to do.

We got back into the car, headed back toward Interstate 880 and suddenly noticed to the west, a sky filled with brightly-colored kites! It was Kite Festival Day on the Berkeley Marina and -- as if sent from on high -- the perfect event for this moment of deep sorrow.

We joined the heavy traffic headed for the Marina meadow, parked at the boathouse, and joined the throngs of moms and dads, babies and small children, dogs on leashes, all of the usual collection of beautiful Berkeleyans who might be expected to turn out for such an event. It was impossible to stay sad as we walked along the waterfront past the house boats and colorful sailboats moored there, took a moment or two to watch a wedding occurring in plain view on the top deck of a Red & White ferry anchored at the peer. Ahead of us high in the sky hundreds of kites of every size, shape, and color flew against a cloudless sky above the sky-reflected azure of the bay! There were all forms of fish, octopi, butterflies, birds, octagonals, geometrics, and two huge yellow cats! How fitting!

Upon arrival at the end of the long walk, we climbed a gentle mound and sat on the grass with hundreds of others to watch the kites against the sky. There were very serious adult kite fanciers with intricately-designed four-string models attached to a kind of spinner; children who had made their own at one of the tents, kites easily identified by their size (small), identical shapes, all white with pink tails; and some that resembled the huge gas-filled types common to holiday parades. From time to time there would be music on the sound system -- everything from bluegrass to Handel. It was impossible to not catch the high spirits of the day.

Several things stood out for me. The stark contrasts between the gentle character of the activity itself and the quiet in the people involved, and the headlines of "rumors of wars and more wars" I'd left behind on the car radio was startling. The "flying" was all-consuming and the "watching" serenity-producing. What a wondrous thing was this ... .

I felt that my two little granddaughters were probably somewhere in that crowd and hoped to catch sight of them at some point. But, surprisingly, there were so many little Berkeley kids of mixed-race -- little olive-skinned beauties with almond shaped eyes and waste-length dark hair -- that they would have been impossible to find. Berkeley appears to have become the mecca for such families, and for those who've given up all claims to racial superiority long ago. Here was this polyglot of humanity living in harmony together in a world at peace.

The flying kites became symbolic of so much for me -- not the least of which was the quiet comment from my mentally-disabled daughter just before we rose to begin the long walk back to the car, "... Did they do it yet, Mom? Do you think that Speedy's in kitty heaven, Mom?" In the environment of love and peacefulness that we were so much a part of in that moment, it was quite easy for this non-believing mother to say quite sincerely,

Photo: Dorrie painted this portrait of Speedy the following week -- to serve as the centerpiece for the memorial service she conducted in the courtyard of NIAD. Do notice the lovely white halo over her head; a nice touch. With Dorian, the staff and other NIAD artists paid proper tribute to the dearly departed in the noontime ceremony. I missed it since it all happened in that world in that world that she lives in where mothers can't always follow.

Posted by Betty Reid Soskin at 2:09 PM No comments: