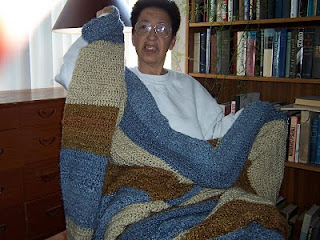 As it turns out, there's really little to worry about.  We've already accomplished the goal of independence ... I just failed to notice.

It was clear when we were going through the discharge procedures at Elmwood yesterday, that Dorian has left a trail of expressed love that will follow her as she pursues her place in the world.  The staff was obviously sorry to see her leave and will welcome her back as she continues to visit those for whom she has incomplete projects.  She has a carefully drawn list of deliveries to make over the next few weeks -- after all she spent several months in their care, and will need to withdraw gradually from this world that she's created for herself these past weeks.

She and DotCom (and Elizabeth) will work out their schedule of occasional visits which will become her reason for being; in addition to her return to NIAD tomorrow on a 3 day-a-week schedule for a few weeks until the physicians give permission for a full schedule.

Now -- if I can only back off the mothering in favor of again becoming "mother as best friend," maybe we can consider this storm having been "weathered."

Her final project was this double-bed sized blanket for her niece, Rosie, who purchased the yarn and shipped it from Southern California to be made into a coverlet.  Dorian completed the task in about 3 weeks while whipping through the halls in her wheelchair; undergoing stretching exercises, learning to walk again (twice!),  practicing walking up and down stairs; helping to lead the exercise class; and teaching her roommate to crochet!

Dorian is ready to return to the world and is more than adequately prepared for the changes she must endure.  And, maybe her mother is, too.

Now for the learning to live together in my small apartment; finding places to stash her belongings; tripping over her two cats; at least temporarily while waiting for more permanent arrangements to be made ... still much to work our way through.

I feel confirmed in the belief that the secret to acceptance is to strive to be a giver.  Takes no effort, and establishes ones value in the world in many ways.  Takes little mental capacity and nothing more than a willingness to extend whatever is of value to you into the lives of others.  Her obvious effort in creating her gifts gains respect and affection that nothing else can achieve.  Both she and the receivers gain so much in the exchange; that's immeasurable, but it must be remembered that the growth is with the giver.

Photo:  Do click to enlarge so that you can see that each of these tiny loops that make up this completely hand crocheted blanket had to be caught in the crochet hook, twisted around, drawn into the knot that, when collected with others becomes a work of art -- what a wondrous thing is the heart.  And, no, selling them is not an option.  It's all in the giving.
Posted by Betty Reid Soskin at 1:54 PM No comments: