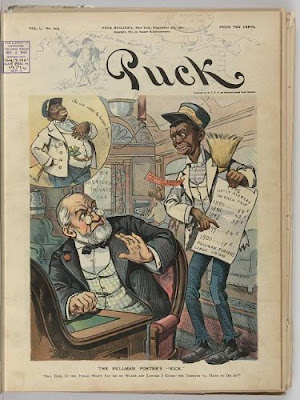 Oh how I wish that the full spectrum of memory was available to more of us ...

... longevity is causing me to gradually become out of sync with the generations below me.  That fact alone skews my reality and puts me at odds at a time when those memories could serve these chaotic times far better, as those lessons learned long ago might be renewed.  Instead they just go unheeded, and regrettably, re-lived.

Long forgotten is a time (during the Fifties and beyond) when it took $47.25/wk to support a family of five.  Crazy?  No.  That was the prevailing wage in the economy of those decades of 40-50 years ago.   Look it up, don't trust my word.  But, of course, that's only true if you were white.  Black families were headed by men who were members of the service workers generation.  Our fathers and uncles were the Red Caps, the valets, bell hops, Pullman porters,  day laborers,  elevator operators, garbage men, handy men, cooks and waiters, none acceptable to the Labor Unions.  They earned $25-$35/wk.  Pullman porters earned $18 a week, plus tips, for a 12-15 hour workday.   The fight for entry into the labor unions was still ahead.  Even attaining supervisory levels was limited in most industries since black men were still considered unqualified and inferior to white workers.

My proud father, Dorson Louis Charbonnet, a trained and experienced millwright and builder, once he left the South, could not find employment except as a white-aproned sandwich hawker in a Southern Pacific railroad lunch car! In that role he earned $75/month for most of his life, and with my mother's help, supported our family of 5 and paid off the mortgage on our modest little home in Oakland.  Though he worked as a carpenter in later life, he could only join the Union after crossing the color line.  Though it was unspoken, I'm certain that he passed for white eventually, as many were forced to do in order to survive.

But what about those who were too dark-skinned to use this option?  Suspecting that Dad was passing was never mentioned, though the fact that we never met anyone of his co-workers, nor were we ever taken to visit his worksite, and the silence around the issue made for a climate of shame that worked to alienate my sisters and me from our parents for much of our lives.  Since both my sisters were lighter-skinned than I in the early years, I'm sure that the burden of keeping the secret was most deeply felt by me; as if just being "colored" in a hostile world weren't burden enough for a child.

Our mothers and our aunts were 35 to 50 cents/hr domestic servants, taking care of white folk's children and cleaning their homes.  It had always taken at least two wages to support black families; families who were deliberately and cruelly omitted from the Social Security System by the Roosevelt Administration. From a time when domestic service workers and laborers -- as a class -- were not included.  Look it up.  An Administration now remembered proudly as "Progressive", an administration that took the nation to war with a segregated armed forces.  An Administration that imprisoned 140,000 Japanese and Japanese-Americans during that war, 70,000 of whom were American citizens.

This is who we were as a nation in those times; times now looked back on as "Great!", and the time when the "...middle class built this country!"  And now I may be one of the few still living who has lived long enough to remember -- at what cost to how many of us?


And, may I suggest -- that it is in these election cycles that those measurements can best be taken, but we must remove the blinders while assessing, and face up to our national truths as they were lived by those of us who lived them.

And we must remember, that we are not living in the same reality -- and rarely if ever has that been true.  The America that I've lived in bears little resemblance to that of many others.  That's probably as it should be.  I don't argue with that.  It's from those variables that our richness as a Nation is forged.  But the variables should not rise from the inequities and injustices embedded in a flawed social system that bears the awful legacy of slavery, but from the adjustments and corrections we've lived through as a people guided by our founding documents and a heritage of freedom that ensues therefrom  -- as we continue the process of forming our "more perfect Union."

I'll be listening for truth in the upcoming debates over the months ahead, and hoping to live through another election cycle.

Posted by Betty Reid Soskin at 2:22 PM No comments: