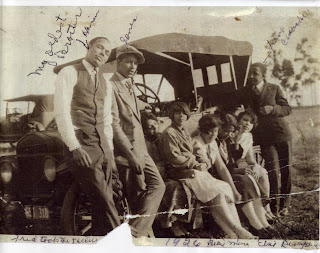 Wondering if I'm the heir apparent ... part of a continuing story ... ?

In that strange way that life is unfolding these days, I found myself standing in the art gallery/home of my friend's neighbors in Mendocino -- a noted architect and his wife -- now retired. We were just about to set down our cocktail glasses and head for home when I noticed a poster-sized photograph of a building I knew well. Our host had brought us into his working studio. The picture I immediately recognized as the beautiful Ordway/Kaiser edifice that was built alongside picturesque Lake Merritt in Oakland. What I hadn't known until that moment was that this masterpiece was designed by our host and his firm years ago. All thought of leaving into the early evening (hoping for a sunset to behold from the window wall of the living room back at Tom's) vanished into the next half hour of learning more about the adventure of envisioning the brilliant design and bringing it into being. Our host's eyes lit up as he became animated with his own memories as he related how, (pointing to another huge photograph of the original design that Edgar Kaiser had rejected) they'd then created the one that I knew so well.

I'd fairly recently had occasion to attend a meeting there at the corporate headquarters with members of our staff and the Kaiser archivists to consider the possibility of our obtaining the "Think Big" Henry J. Kaiser exhibit as a permanent installation at the Rosie the Riveter World War II/Home Front Historical National Park in Richmond. It was a successful meeting -- but my mind never quite left the sight of that beautiful roof garden (atop the parking garage) with those large and lovely now mature trees that I learned were artfully placed atop the massive weight-bearing steel columns that supported the multi-storied garage roof. It was a part of the Kaiser building that I had known nothing about, and it was a wonderland of flowers and shrubs and a variety of trees beautifully landscaped for all to enjoy. Made me wonder just how much of the world that is immediately around me have I not yet discovered?

...and that brings us to Aunt Vivian. That brings us to yesterday's unanticipated conversation with Kaiser historian, Steve Gilford, who happened to stop by my cubicle on one of his all-too-rare visits to our reception center -- where we enjoyed (as always) another of the marvelously rich rambling conversations about cabbages and kings, and this; about Vivian Allen Jernigan, Kaiser legend. We began this time with my report on this weekend's discovery of new Mendocino friends and of their connections to his field of study and interest.

Stirred by the stories, Steve returned to his home in Petaluma to scavenge through his notes and came up with precious fragments of an interview with a prominent Kaiser physician that -- even in the sparseness of the entry -- confirm Vivian as I knew her throughout our lives. But that's for tomorrow ...

I need to refresh these wisps of memory stirred by the fine talk and meeting with the Kaiser builder of that corporate headquarters -- and I need an evening of rummaging through old albums for photos and that collection of pins that she was awarded over the years that I'm sure were the happiest in her long life of service to the Kaiser hospital friends and family ... .

Photo: This is a photo of Aunt Vivian and her friends -- dated 1926. She is second from the far right sitting on the running board. The writing on the picture is typical of every snapshot I have that came from her albums. I used to find the scrawlings annoying, but now I feel her presence when I see her notes.
Posted by Betty Reid Soskin at 7:38 PM 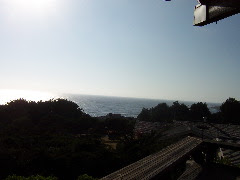 At a time in life when I probably should be slowing down, the pace of my life has accellerated to a point where I'm not writing simply for lack of time. There is so much to share and so much to do -- that I'm beginning to consider running away from home -- if I could just find the time to pack!

I did manage to get away to Mendocino for another weekend of sheer joy, sunsets over an expanse of ocean that you would not believe; wildflowers wild turkeys and deer living the good life -- co-habiting with caring humans within 90 feet of ocean's edge with sea lions barking on the great rocks below. Wish I could have lingered much longer, but my crazy/busy world was waiting and time is running out ... .

There were azaleas and rhododendron in more shades of pinks and reds and lilacs than I'd ever have imagined. The weather was ominously warm (temperatures unheard of before now this time of year in this coastal Eden), an undeniable omen of the warming of the planet. It was almost a relief when the fog rolled in and blotted out the ocean and the sunsets (except for the perfect red ball that blasted its way through the fog just before setting time). That was on Saturday, the first day. The balance of my 3-day visit was marked by fog and more of the natural oceanside coolness that gave us a comforting feeling that all may not yet be lost.

My dear friend is far more limited in his physical capacities than I, and it's a relief to spend time in his world where everything must of necessity be slowed to his pace. It's a blessing, I think. I find myself breathing easier and more slowly. After the first few hours I can feel my rhythm change and an unfamiliar peacefulness settle in and I sleep long and hard in the unaccustomed silence of this coastal paradise that is his home. No sirens, nor traffic noises, nor train whistles or the human shouts that are disturbing for the few seconds that it takes to identify the quality and mood of the energy that drives them ... then to exhale.

I've taken to listening to audio books on the 3-hour drive through Marin County then the winding roads from Cloverdale into the lovely vinyards that carpet the Anderson Valley then the miles of redwood forest until Highway 128 reaches Coast Highway 1 -- opening out to the Sea! This time I'd brought along Nora Ephron's "I feel bad about my neck" which was funny and droll for a few miles then became silly and too young (yes, even 64 is now "too young" for where I am in life). I stopped "feeling bad about my neck" many mirror-looks back and became grateful for having one that swivels properly while acting as a pedestal for character.

It surely wasn't that I haven't had many of those worrisome vain feelings about the dregs of aging from time to time, but as I may have mentioned recently, somewhere along the way I stopped becoming and started being, and scrawny turkey-waddle-type necks and wrinkles and face creams that promise but don't deliver slipped away into some psychological abyss never to return (hopefully) and -- either my eyesight grew less effective or my mind censors out the weird stuff -- because I'm pretty much at home with looking into my mirror and finding my mother there. It's strange that my interior doesn't seem much effected by the declining exterior, and I often forget about age until I accidently catch a brief glimpse of my reflection in a store window... Then I become aware that one sign that there is still some vanity operating is the fact that I tend to look not nearly as often and am content with whatever looking it takes to brush my teeth and hair and make sure my lip gloss isn't creeping into the feathering above my lips where I sometime find a single quarter inch white hair mysteriously growing there unnoticed. Then I remember.

But then I remember with a grin toward no one in particular -- that the bank has given me another 30 years on my mortgage which assures that I must live for at least another 20 years in order to meet that obligation. That's about how long it will take to complete all of the tasks that I'm currently engaged in anyway, so it all works out fairly in the end.

Meanwhile, I hope that Nora gets her second wind soon -- she will, I'm sure, and then she'll give up the concealing black turtleneck cashmere sweaters and lovely scarves and find a new way to express her delightful sense of humor. That great wit will surely follow her into character as pretty drops into the background.

Tomorrow I'll stop in at my local bookstore and see if I can find the next audio book -- maybe it needs to be another escapist work (not David Halberstam?). There's a lot to be said for letting the mind takes one wherever it will, especially if it's into the recent past. Good way to develop some perspective on the road ahead.

Photo: taken from the deck of his home, facing an almost wrap-around view of the ocean.
Posted by Betty Reid Soskin at 7:05 PM No comments: