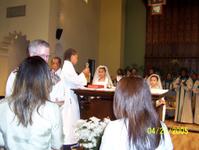 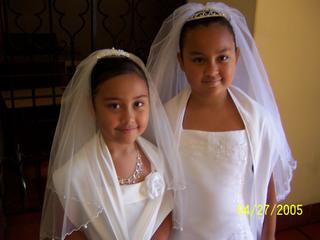 Since Sunday I've been wondering how to talk about the re-visiting the "faith of my fathers" on the occasion of the sacramental ceremony for my exquisitely lovely young granddaughters, Alyana and Tamaya Reid. So much bubbled up that I'm still running it all over and over in my head and coming up with little more than great pride and joy in their innocent acceptance of the faith that has supported our family for generations.

I was certainly not prepared for the changes in Catholicism. Much of which is shaped by changing demographics in Oakland plus the calling of a priest to St. Patricks whose history includes parish work in South Africa as well as time spent with Mother Teresa in India. He is white in a parish that is not. This added a note of irony to hear his homily reminding us of how "God so loved the poor and of the beauty in the pride of parents with little to give but love...". The church is situated in one of the poorest areas of the city with a congregation made up of largely African-American and Latino parishioners. Both the priest and the church have yielded to new demands for relevance by the congregations and holds its masses in two languages. In this formerly all-black church there is an adapted fundamentalist black gospel liturgy that closely resembles protestantism. This characterized the communion mass that honored David's children.

When I received First Holy Communion many years ago it was with a large class of kids with whom I'd studied catechism over several months. Little girls were dressed like tiny brides (as were my granddaughters) and marched in a long procession before a gathering of proud parents. We stood awed by the Latin mass -- the scent of incense -- the terrifying sight of Jesus hanging on the cross ... and were inducted fearfully yet reverently into the faith of our elders.

Alyana and Tamaya were the only young celebrants on Sunday. The other children had received the sacrament the day before in the Spanish-speaking mass. This day was to be ours, alone, with family and friends and the rest of the English-speaking parishioners.

When I was a child the area that held the altar was sacrosanct and no one save the priest and the altar boys crossed past the altar rail under any circumstances. Genuflecting and the making the sign of the cross was practiced each time one walked past the altar by way of the middle aisle. At St. Patricks the altar sits on a raised platform closer to the congregation -- with no separating altar rail -- and with the (African-American) choir seated behind the altar in that eerie "no-trespassing" area of old. The sense of mystery and piety had evaporated and that familiar sense of the "presence of The Almighty" had disappeared along with it. For me Catholicism has gone generic; has blanded out.

I saw no kneelers until someone pointed them out to me when I asked -- tucked up idly under the pews -- and not in use throughout the entire 2 hour mass. Nothing was familiar; surely not any of the things that I'd relinquished to my need for truth and logic many years before. I missed the "awe" of it all.

What had not changed, however, was the strength of the deep love and pride and trust in a forgiving savior that was everywhere in that sanctuary. David, is a strong believer as are his children. I honor that. My other son, Bob, seated beside me on the front row probably is still unchurched after years of UUism, but for the moment we were both at least temporarily, believers, too. We believed in David, in Alyana, and in Tamaya and supportive in their trust in the path they'd chosen - in the footsteps of my parents and their parents and all of the generations gone before.

What was dramatically new was the large role that our little girls played throughout the ceremony. They marched in with the priest who carried the tall brass crucifix glinting in the soft light from stained glass windows, the altar boys, and the church dignitaries in a processional. I saw no nuns -- but then since they're not often dressed in habits any more -- how would one know? The two little ones sat in the front row in full view of the parishioners -- aware of being celebrated. At one point during the rites, they disappeared only to emerge later at the head of another procession from the back of the sanctuary -- this time leading while they together carried a large folded immaculate sacred snow white cloth that they set into place on the altar in preparation for the sharing of the host.

The ceremony ended with these two little girls standing before microphones singing a lovely gospel song (black gospel) to a surprised congregation who shouted their approval in typical black "call and response" at various high points in the music. It was astounding!

I sat weeping with joy but nonetheless still comfortable in my religious independence yet with not one shred of regret at having moved on long ago into a personal search for truth. But oh, how I wish them continued joy in their own believing; and that this belief system will hold them close and nurture them until such time as they, too, enter the age of inquiry. I truly believe that -- if allowed to be -- spirituality is as developmental as the rest of us, and that -- given education and experience through which to gain the strength to step off into the chasm of unknowing along with other seekers after truth, they, too will be strong and principled and compassionate.

I've found it to be true that those without a sense of certainty and mission are far less strident and evangelical than those claiming truth. The cruelties seen today coming from fundamentalists living distorted versions of Christianity bears little resemblence to the ways of the gentle Jesus who, I firmly believe, was also a seeker after truth -- a leader who became one by virtue of being followed and not by self-proclamation.

In that respect, I can probably claim to be in good company. I can only wish His kind of love and humility for my newly-blessed little Catholics, Alyana and Tamaya Reid.

Posted by Betty Reid Soskin at 11:20 AM No comments: 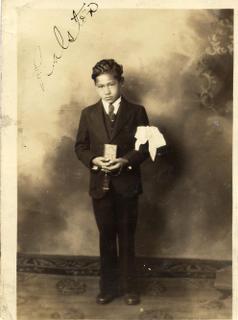 Realized while away that one of the things that I found hardest to deal with was the assumption on the part of friends that I had become a "non-believer" because I'd not yet "found God," or that I'd simply not yet discovered their system of belief. I find that equally as frustrating whether it comes from the religious right (the fundamentalists) or from the religious left (New Age).

Many of the pseudo-religious-spiritual cliches I see here in these discussions have been familiar concepts for many years. Having survived catechism classes under the strong hand of Sr. Richard Marie as a child; Tibetan Buddhism (ten years -- by osmosis through marriage) and a warm and close friendship with Lama Wangdor; Zen Buddhism with occasional weekends at Tassajara in the Santa Cruz Mountains; Esalan with Gregory Bateson, lectures by Joseph Campbell of his work in masks and myths, etc. Add to that study in the world of the Graduate Theological Union where I have the privilege (as a Trustee) of participating in seminars with graduate students who are working hard to hammer out understandings worthy of passing on to others; plus the chance to sit at the feet of ever-searching Jesuits in conversations about life in the post-Christian world (yes!). Listening to Fr. Matthew Fox lecture on almost anything stirs the imagination "beyond belief" (and I mean that to be en quotes). After all of that, what I've ended up with is a more and more complex jungle of possibilities to find my way through, far fewer answers, and the firm sense that the only human response possible in this time of exploding theorem in astrophysics is to wait and withhold judgement until the confusion clears.

That I've arrived at this age in a state of wonder seems just fine to me. That I have by now a very critical mind that demands logic even while standing in awe of the miraculous is equally so. In the process of maturing, I've lost the need to "make sense" of the countless possibilities and live now quite comfortably with conflicting truths, contradictions, and paradoxes, and the need to rule out anything becomes less important as I continue to grow and learn. I've remained open to new thought, and have a hardest time when I find myself trodding old ground long ago explored and exhausted. But sometimes I find new truths in a fresh understanding of old themes -- and I never know when that will happen so I find myself staying "tuned in," just in case.

I suspect that I will leave this life still reaching ... .

Maybe the word humanist best describes where I find myself at the moment, but even that's subject to change in the light of new revelations.

In the words of my (at that time) 13 year-old son, Bob, when questioned about his beliefs by the parent of a young friend, "I don't think that I'm an atheist -- because there's nobody up there not to believe in."

I suppose that says it for me, too.


Photo: Young cousin, Ralston Brown, only son of Doritha Charbonnet Brown and her husband Louis. He was 7 when this picture was taken at his First Holy Communion ceremony. Dorita was Dad's youngest sister. Ralston is a jazz drummer who plays in and around the Santa Cruz area and has for many years.

Posted by Betty Reid Soskin at 10:30 AM No comments: